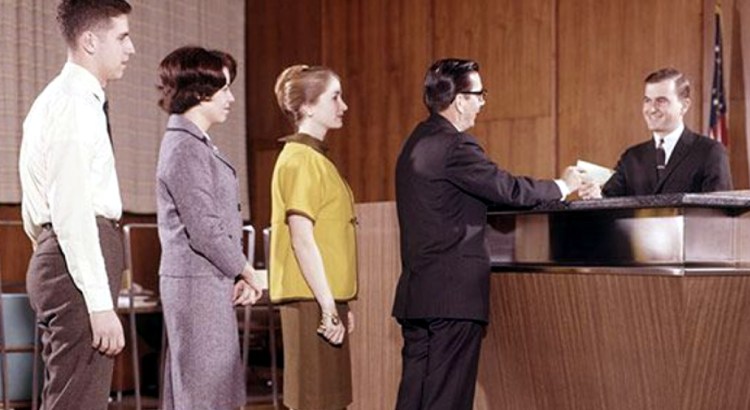 It was a victory lap more than just a ceremony with windy speeches. Some 700 gathered for the June 7, 1969 building dedication of the new city hall/civic center; Santa Rosa was on the “threshold of an era,” cheered the Press Democrat. And that was true. The city government complex was the keystone of a project which brought drastic changes to downtown, more so than anything that had happened since the 1906 earthquake.

About a quarter of the downtown core was new construction east and south of Courthouse Sq. – mostly tall office buildings associated with big banks, government offices and parking garages/lots. There were no new shops or restaurants; the only retail business in that area was the White House Department Store, relocated from two blocks away. The city designed for living was starting to look more like the city designed for providing office space for a brigade of bureaucrats, bank tellers and accountants.

The ceremony was also somewhat of a wrap party. For more than a decade Santa Rosa had been daydreaming about a complete makeover of the downtown area; architects had produced designs – some lovable and some laughable, but all destined for the wastebasket. Aside from the state and federal buildings which were yet to be built in this redevelopment zone, there were no big construction projects on the horizon for Santa Rosa. (Here’s a short recap of what happened over those ten years.)

The day after the ceremony, the Congress for Community Progress held its annual meeting. The Congress was an ad hoc coalition of local social clubs, downtown business interests and city manager/directors; it was formed by the Chamber of Commerce and (no surprise) their suggestions rubber-stamped what the Chamber wanted. At the top of the wishlist that year was a convention center, probably at the current location of Westamerica Bank on Santa Rosa Ave. They also urged a major hotel/motel be built near Railroad Square, which could become a “tourist-oriented ‘old town.'” But these ideas were whiffs of smoke; the coalition had no clout to make anything happen.

And then came the October 1 earthquakes. I suppose there must be an alternate universe where city leaders could have screwed up worse – but it’s hard to imagine.

Assessing the damage was an obvious first priority; was a building damaged – and if so, could it be repaired? And did “repair” mean it must be brought up to modern code standards? This started a heated debate; structural engineer Richard Keith told the PD, “if we use the code as it is today, we’d probably destroy most of downtown.” (Details are hashed over in the following chapter.) By the end of the month Santa Rosa’s chief building official, Ray Baker, declared seventeen commercial buildings must be demolished, plus 28 homes – although he would change those numbers later.

The City Council declared an interim emergency that created its own set of problems. A rule was issued requiring all permits for making repairs to get underway between November 5 and 19 – an arbitrary and absurd two week window which surely had every contractor within miles dancing for joy.

Had your building been red-tagged, there was no appeal (at least, I found none mentioned in the PD). Demolition was your responsibility but if you couldn’t afford it, the city would hire a contractor to tear it down – and place a lien on the property for the cost.

But the most urgent post-quake SNAFU was that no one in the city had given any thought about what should be done with the estimated 30,000 cubic yards of rubble created by all that demolition. Contractors were dumping loads illegally near the airport, where Farmers Lane passed Santa Rosa Creek and at the city wastewater plant. Constantly burning piles of mixed construction materials led to complaints of air pollution (and given that the stuff was from older buildings, the soil must now be laden with asbestos). The city passed an emergency ordinance exempting owners of dump sites from zoning regs – but requiring them to get a special permit.

Reading this, Gentle Reader is forgiven for concluding the city was being run by incompetent boobs and nitwits (and far be it from me to ever dispute G.R.’s infallibility). But there was another factor in play: When these bad decisions were being made, city hall had a sharp focus on using the earthquake damage to seek millions of dollars from the government – in what would become the largest single payday in Santa Rosa history to that date. On the same day homeowners and landlords were blindsided by that two-week repair deadline, the mayor and planning director were in Washington D.C. playing Let’s Make a Deal.


Prior to the 1969 earthquakes, Santa Rosa’s poobahs had mused about doing something with the area between B Street and the highway, but there were no real plans to redevelop it similar to the way a chunk of the downtown core had been just turned into a financial and governmental district. At the earlier Congress meeting, Trent Harrington said time was running out, and the city should take “good close look at further renewal while an agency still exists that can handle the federal details.”

The agency he referred to was the Urban Renewal Agency (URA) where Harrington was former director – again, skim the recap if the agency is unfamiliar to you. In its heyday earlier in the 1960s, millions were shuffled through the URA, most of it from the government. Harrington had recently stepped down to take a top job with developer Henry Trione’s company and as he implied, the agency’s future was uncertain. All the redevelopment deals were wrapped up; its main task now was waiting for construction on the state and federal buildings to begin.

Now Mayor Jack Ryersen and Planning Director Kenneth Blackman were in Washington to meet with top HUD officials. Their hopes were that the department would bless a second – and more ambitious – redevelopment project in Santa Rosa and approve it with haste, given the need to recover from quake damage. The city’s first application for urban renewal money had taken almost two years to get the green light.

The feds’ immediate reaction was the area was too large and needed to line up with the boundaries of the previous project. Ryersen and Blackman proposed 35½ acres, from Fifth Street to Sonoma Ave. (the Chamber of Commerce wanted it to extend down to Juilliard Park) but HUD cut it off at First Street. Once back home, Blackman heard from the San Francisco HUD office. Enough with the razzle-dazzle, they said – how did the city propose to redevelop the land? And where were the studies?

There were no studies, which would have taken months or years to create. The city had vague architectural site plans shown above and below that envisioned most of the area as a parking lot with a community/convention center (and oddly specific, a coffee shop). But aside from the URA’s obvious desire to crank up the federal money machine again, there were legitimate reasons why the city needed quick approval.

Santa Rosa was soon to face a Catch-22 in the HUD rules; cities with populations under 50,000 were expected to pay one-fourth of the total development costs, while cities over 50k paid one-third – a difference that could have added close to a million dollars to our part of the bill. At the time of the 1969 quake, Santa Rosa’s population stood at 48,450 (the official 1970 census count would be 50,006).

The other reason was because of the stupid two-week window on repair or demolition permits. Under that artificial deadline, major demolition work was expected to start by the end of November and there was still no solution as to what to do with the rubble. The city engineer begged anyone with a possible dump site (“big and small”) to contact the Public Works department. There was also blowback to the requirement that homeowners pay for their house to be torn down or face a lien on the property; now the city would handle the bill.

Except for ongoing citizen complaints about illegal dumping, little was written about earthquake recovery plans over the next few months. The HUD application process went smoothly; Santa Rosa was allowed to file it as an amendment to the original project, which meant that whatever monies were left over could be used. There was a hearing in March, 1970 for the City Council to officially approve the funding request and there were no meaningful public comments.

But still, there was no progress on deciding what would be done with the area. “Proposed for the new area are a hotel-motel complex, service facility, coffee shop, a department store or two, other retail space and a community center,” as the Press Democrat had mentioned after the public hearing.

NEXT: THAT WHICH WE LOST