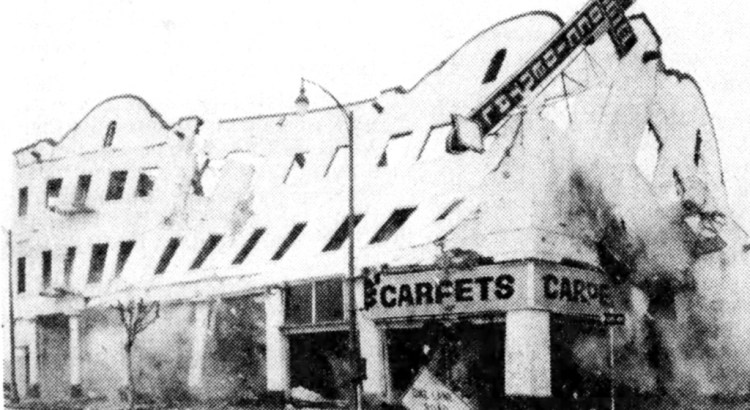 During the first days of 1970, the Press Democrat asked several of Santa Rosa’s movers ‘n’ shakers what changes they thought would come about in the new decade. The city manager believed the population would grow by 40 percent (it actually increased by two-thirds). The assistant city manager imagined they probably would get a computer and use it for payroll and other accounting tasks. And the city planning director predicted by 1980 they were going to wipe away an older section of the downtown core.

It had been barely three months since the Oct. 1969 quakes hit Santa Rosa, causing moderate damage. Building inspector Ray Baker had said about 17 commercial buildings and 28 homes around town were in such bad shape they needed to be demolished, but most property owners were scrambling to arrange repairs. The city had just started talks with federal officials about designating the area west of B Street an urban renewal zone to pay for improvements, but nothing had been said about plans to “wipe away” that part of downtown. (Those developments were covered in the previous chapter, “MONEY FIRST, PLANS LATER.”)

Planning Director Ken Blackman continued: “By 1980, redevelopment will be viewed as a continuing effort by all major cities to combat deterioration and blight.” Ah, the “B Word” – the incantation that turned historic homes, neighborhoods and districts into cash dispensers. To quote myself from an earlier article:

Santa Rosa had already received $8 million for redevelopment east and south of Courthouse Square – the bank buildings and government offices still in use today. Now that the city was asking for a new tranche of redevelopment money, the earlier project began to be called Phase I, with the west of B St. area dubbed Phase II. There was also mention made of potential Phase III, IV and V later.

Thus the day came to pass when Santa Rosa’s mall-destined future was cast in stone: March 10, 1970. That’s when the City Council unanimously passed ordinance 1439, which declared “…the area is a blighted area and that it is detrimental and a menace to the safety, health, and welfare of the inhabitants and users thereof…”

It allowed for the city agency to condemn buildings and force the owners to sell the property via eminent domain. It stated that a program would aid those living in the area move to somewhere else “not generally less desirable.” It promised “due consideration” would be given to providing new parks and recreational facilities “with special consideration for the health, safety, and welfare of children residing in the general vicinity.”

By the time the new ordinance passed, the city had raised the total of buildings needing demolition to “more than 75” of the 89 found in just the Phase II area – all but ensuring Blackman’s vow made at the start of the year to “wipe away” that part of downtown. Yet still there were no plans at all of what to build in its place, aside from vague notions of “a community center, hotel-motel complex, major retail store with allied retail, a restaurant and a service station.” (See the layout shown at the end of the previous article.)

Some downtown buildings outside of Phase II were also condemned. The earliest demolitions began right after the first of the year and were the Wards Department Store at 411 Mendocino Ave. (now the parking lot adjacent to the Press Democrat building) and a building at the SW corner of Third and Santa Rosa Ave. The Roxy Theater at the NE corner of Fifth and B was also red-tagged although the place only had cosmetic exterior damage, along with some ceiling plaster falling. Politics may have played a role in the decision; there had been no end to the fuss after the theater switched to an “adult art” format in the summer of 1969, and the PD regularly printed letters penned by furiously offended citizens. After the quakes someone wrote the building’s damage was clearly a sign of god’s wrath.

Another quake casualty in the downtown core was the building east of Mac’s Deli on Fourth street. Although it was supposedly so badly damaged as to be unsafe, the structure proved remarkably difficult to tear down in January 1970. “It’s coming down slow,” the contractor told the Press Democrat, “it’s a tough building.” Since the property owner couldn’t afford the cost of demolition the city hired the company and added $12,000 to the owner’s tax bill (about $88k today). The City Council soon discovered this was a really bad idea; besides losing rental income, some landlords claimed the tax surcharge would make them go broke. The rule was changed so the city would buy a property and pay to have it cleared, then resell the vacant lot to an investor. 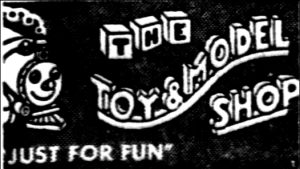 For over a decade that building had been home to the Toy & Model Shop, and after it was condemned the store reopened quickly at the corner of Third and B. Recall at that time the risk of demolition was considered a rare and worst-case option; the toy sellers couldn’t know that just a few months later Santa Rosa would declare a swath of the city “blighted,” including their new address. The shop remained there until moving to Coddingtown in 1971, and was the only business displaced twice by the disaster.

“Where do we go?” Was a pressing question for every business located in Phase II after the City Council passed the 1970 ordinance declaring the area blighted. Despite Phase I redevelopment filling up a section of downtown with banks and government buildings, there was space available east of B street; a PD article before the earthquakes compared downtown to “swiss cheese” because there were so many vacant storefronts, some of which had been empty for years.

The 1973 document on the renewal project estimated there were 169 businesses, offices and whatnot that had already moved out of Phase II or would need to do so. About a third closed instead of relocating, so the property buyout and dislocation payment “acted as a windfall profit” in the view of the report written for the city.*

Many of those lost businesses had been around for years – sometimes decades – at the same location so it was probably insulting to frame their forced closure as if it were like winning a lottery scratcher. The report also discounted the hundreds of people living in the Phase II area; losing an apartment building with twelve units counted as a single business in the city’s view. Ditto the hotels, which had 203 permanent residents after the quakes. No mention was made of the private homes that would soon disappear under the bulldozers.

It’s also quite a slanted way of measuring the true impact. To get a better idea, I assembled a list of Phase II storefront businesses and living spaces that existed before the quakes and in the year following. My list and the official estimate nearly agree on permanent closures; the report said there were 69 and I found 75.

The big difference is the official count of 169 includes every warehouse, lodge hall and back office – but if you consider only places which were actually open to the public, the total was 118. This means the percentage of tax-paying businesses lost because of Phase II destruction was nearly twice as many than the city would admit (63% vs. 35%). And unmentioned in the report was that all those businesses had customers who would be seeking those goods and services elsewhere, maybe outside of Santa Rosa. So much for the hoopla of urban renewal being such a great boon to the local economy.

The Press Democrat was the loudest cheerleader for redevelopment so there was nary a discouraging word from businesses forced to move, aside from Elwin Hardisty’s remark that “it was a bitter pill to take” since they had remodeled their houseware store just a short time earlier. Fred Plante, who sold many local folks their first (reasonably decent) home stereo system, saw his business improve after moving to Mendocino Ave. He told the PD more women were coming in because he now had “a location that all my customers feel safe to visit.” Louis Traverso was reassured by his clientele “no matter where you decide to go, we’ll find you.”

The paper also glossed over the costs of setting up at a new location, which could be considerable. Passing mention was made of several stores applying for low-interest SBA (Small Business Administration) federal loans but only twice were figures mentioned: Plante went into debt for $83,000 to reopen and Hardisty’s loan was $189,000 – almost $1.3M today. Perhaps the reporter misunderstood and this was what Elwin actually meant by his “bitter pill” comment.

Phase II demolition began in early March, 1972. Slated for that first round were buildings on Fourth between A and B Streets, plus an apartment building and ten homes on First, Second and A St. Within days, a lawsuit was filed to stop the destruction.

The suit was filed on behalf of those living at the Occidental and Santa Rosa Hotels. An earlier survey had found there were 203 hotel residents with three out of four elderly or disabled, and that 1970 ordinance had assured them the city would find apartments comparable in quality and cost. A lawyer for the group told the PD those efforts were “completely inadequate” and resulted in tenants scrambling to find housing on their own. Rather than helping as promised, the city was instead trying to “temporarily” pack all of them into the Occidental because the Renewal Agency wanted to vacate the Santa Rosa Hotel. Not only that, the living situation was made worse because nearby restaurants, pharmacies, barber shops and other essential businesses were now boarded up and sidewalks were blocked off.

Six weeks later the group dropped the suit after the city convinced them it would fast track two senior citizen housing projects. One was the Salvation Army Tower, AKA Silvercrest Housing, at 1050 Third St. which had been rejected not long before. The other was Lamplighter Senior Citizens Inn on Range Avenue near Coddingtown (since 2014 it’s been the Parc Station Apartments). Newly built Bethlehem Tower on Tupper Street also promised to take in dozens of relocated tenants.

(Unrelated but interesting sidenote: At that same time another redevelopment project was ruffling feathers all over town – The Press Democrat reported there were plans to raze the McDonald mansion and build a “townhouse development of some kind.” The PD commented demolition was inevitable because “it is a dinosaur, unadaptable to the twentieth century marketplace.” The paper further endeared itself to history buffs by claiming “Mapleton was built in 1869 or ’77 or ’78, depending on the source.” As Gentle Reader knows well, Mableton was built in 1879.)

As the seniors watched their world being dismantled from hotel windows, Santa Rosa continued to rake in federal money, including another $1.5M for land acquisition and relocation. By Labor Day 1973 there were still over a hundred living at the Occidental. Some had been placed in Bethlehem Tower, some had enough income to rent a modest apartment somewhere. Some had died. Two years after that there were still 35 tenants and most went to Silvercrest. All told, it had been three and a half years since the seniors agreed to drop their lawsuit after the city promised to make good on the fundamental condition that it would find them new places to live.

The demolitions dragged on until 1978. Eminent domain was used (at least) six times to force a sale, including an apartment building on Third Street. Except for that original City Council meeting ‘way back in 1970 there had been no public hearings, and the legally required Environmental Impact Report was not prepared until two-thirds of the buildings had been already demolished.

The Cal Theater was torn down on January 13, 1977 and more will be written about that later. The Occidental Hotel – the oldest building in the project area and the last to be destroyed – fell on December 14 of that same year.

NEXT: THE CHOSEN ONE

One thought on “ROAD TO THE MALL: THAT WHICH WE LOST”