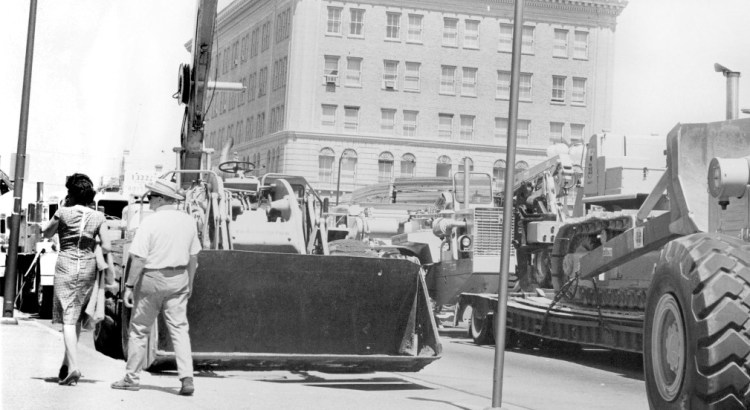 In 1946 the Chamber of Commerce had a contest to find a new slogan “best fitting Santa Rosa.” Out of 400+ entries the winner was Mrs. B. Taylor, who came up with “The City Designed for Living.” She was awarded $25 and it was money well spent; everybody loved the motto, which was added to the city’s stationery. It was often part of the Press Democrat’s masthead and stores worked it into their newspaper ads. The Chamber wanted to update it in 2007 and paid $80,000 to Tennessee experts who came up with “California Cornucopia” – a catchphrase so hideously vapid it inspired only an abundance of invective. Nor did it help that it came with a logo which looked like someone’s doodle on the back of a cocktail napkin.

Today’s Santa Rosa would be unrecognizable to Mrs. B. (sorry, no first name I can find). Hers was a city where downtown was a destination – the place you usually were when not at home. It was where you picked up groceries, dropped off shoes for repair, visited the dentist, bought a new toaster, got a haircut or a perm. Mrs. B. saw the sidewalks filled with kids after school and if she was out late the stores beckoned evening shoppers with lighted windows. It was the world as seen in Hitchcock’s “Shadow of a Doubt” – and who knows, maybe Mrs. B. can be spotted in the background of some scene in the movie.

Mrs. B. might find herself lost in Santa Rosa’s tiny downtown because so many landmarks are gone. What happened to the courthouse? Where are all those blocks of stores between B street and Railroad Square? How did they get rid of Santa Rosa Creek? There’s little she will recognize beyond a few scattered buildings.

The story of how all that happened is the theme of this series, “Yesterday is Just Around the Corner,” and the short explanation is that Santa Rosa was gripped by an epidemic of Redevelopment Fever in the 1960s and 1970s. Yes, some rich people became richer because of the deals and some of the doings should have probably seen the inside of a courtroom, but it was good intentions, not greed or corruption, that led to the dismantling of “The City Designed for Living.” And Santa Rosa was far from alone; communities all over the country were making similar stupid, irreversible decisions in those days.

This chapter is about the Urban Renewal Agency (URA), an unelected five member body with a full-time planner and an executive director (hired from Merced) which had broad powers to make deals for redeveloping all of downtown Santa Rosa. Formed by the city in 1958, they kicked it off a couple of years later by declaring forty acres of downtown so “blighted” that it needed to be demolished. Designating sections of your town blighted was a necessary first step before applying for free redevelopment money from the government.

The appointed members of the URA had diverse backgrounds that might have served them well on some less critical civic board or committee, but as far as I can tell none of them were educated about urban planning or architecture. Members in the early 1960s included the owner of a building supply company, a retired promotion director of a packing company, a personal injury lawyer, the manager of Sears and the VP of a savings & loan.

Before the mid-1960s the URA shuffled paper. They interviewed and hired a parade of out-of-town urban planning consultants to draw plans and build models, then made a sweetheart deal with a development group led by Henry Trione to draw more plans and build more models. They facilitated fantasy projects which had no actual schedules nor budgets; nothing planned during those years was ever built.

Things began to change in 1966, the year we tore down the courthouse in Courthouse Square. That demolition was nearly a decade in the making; the building was damaged in a 1957 earthquake – mostly cosmetic, not structural – and the Board of Supervisors mulled over the idea of building a courthouse at the new County Administration Center instead of downtown. After lots of due mulling (and a legally-questionable financing deal), the Sonoma County Hall of Justice joined the other county offices at the big campus outside of city limits, and on March 22, 1966, the Supervisors officially agreed to sell Courthouse Square to the city of Santa Rosa URA for $400,000.

While that deal was in the works, the URA was focused on what to do with Courthouse Square once it was in their hands. Courthouse Square wasn’t in the blight zone but was still central to the URA’s plans to remake downtown, and they began with the presumption that it was essential to punch a four-lane street through the middle of it, connecting Santa Rosa and Mendocino Avenues. Like almost all the URA’s other sweeping decisions, this was declared as a done deal with no public input – and if the Press Democrat ever wrote a critical word about the URA’s doings, I’ve yet to find it.

An early proposal was for all city offices to be stuffed in a “Civic Tower” up to 15 stories high and straddling both sides of the new street. The description in the PD said there would be parks on either side, including two lakes (!) and a constant-flow artificial creek. This plan was abandoned but the debate over where to build the new city hall became a marathon political squabble between the URA and developer/city councilman Hugh Codding, who wanted it near Coddingtown or the County Administration Center. Finally the none-of-the-above option was chosen, and the civic center would be built on top of the filled-in bed of Santa Rosa Creek (MORE).

With no worries over the placement of city hall and the courthouse being demolished, Courthouse Square was a blank slate in the spring of 1966 – albeit a blank slate that was going to have a four-lane road through the middle. This was the URA’s own development project, which in itself probably stretched the limit of the Agency’s charter. But the URA also began taking on powers that clearly belonged to city departments and/or the City Council, such as the closing of city streets.

The URA had decided that the old side streets, Hinton and Exchange Avenues, weren’t needed any longer and would be turned into sidewalks. The former Hahman pharmacy, next to the Empire Building and built in 1908, would be torn down to create a walkway to a planned parking garage that was going to be built at Third and B streets (the old drugstore wasn’t demolished until 2018).

J. Clarence Felciano, Santa Rosa’s go-to architect during the mid-century, was awarded the contract to design the new Square; he had a 10-point plan focused on making it a place welcoming to pedestrians and holding public assemblies. There would be multiple fountains and the bunya-bunya trees would be preserved (honk if you still miss them).

The URA’s plans for Courthouse Square were revealed at a public meeting on June 1 – a day fraught with symbolism, as just hours earlier everyone downtown would have heard the wrecking ball destroying the magnificent stained glass skylight in the courthouse. In the audience were members of the Planning Commission, city planning staff and downtown business stakeholders who were hearing some of the details for the first time. And this was no dog-and-pony show of some architect’s proposal; the URA was expecting to sign construction contracts within a few weeks.

The meeting did not go well.

The arrogance displayed by members of the URA was astonishing. Planning Commissioner Ernest Thomas said the URA was “trying to move the plans too fast” and the Planning and Parks Department hadn’t been consulted – that the URA expected the Commissioners and others to “come down here and make comment and give approval in one evening.” He asked for the Planning Department to have a chance to study the plan.

“The overall plans of Urban Renewal has always been to connect the two streets through the Courthouse Square.” URA Chairman Michael Panas told the Commissioner.

URA member O. E. Christensen piled on, according to the Press Democrat’s coverage. “I’m surprised to hear you say you haven’t known about the Courthouse Square plan, Mr. Thomas, [all city officials] knew of this plan as far back as four years ago.” Thomas was “trying to make it appear we’re attempting to rush this,” he charged, and make it look like the URA was attempting to get the city to “approve something which hasn’t had prior study…we’ve been studying this thing for several years.” He also said, “we’re in no hurry, here,” apparently forgetting that at the top of the meeting Panas had announced they were expecting construction bids in six weeks.

Commissioner Thomas was not reassured. He found it “amazing” that they didn’t see a problem with their street through the square having “two-way traffic dumping into one-way traffic.” Christensen – a structural engineer who specialized in schools and large commercial buildings – replied that wasn’t the URA’s worry; working out traffic problems was a job for the city to “accomplish.”

Another voice of dissent was Wells Fargo manager James Keegan, whose bank was on the corner between the Empire Building and Fourth street. With Exchange avenue slated to be sidewalked over in the URA’s plan, he was “considerably disturbed” that bank customers would be dependent upon construction of that proposed garage at Third and B and the proposed walkway where the drugstore used to be. What assurances could the URA give that the property could be acquired for the walkway?

“None,” replied Chairman Panas, who added there were “ways” to get the land, but it was “out of the hands of the agency.” There was no money in the URA budget to buy it. Banker Keegan commented that the area designed for public assemblies should then be turned into parking, as having an assembly area was a “big joke” anyway.

The meeting closed with the URA admitting the cost for all this was “quite over” what they had planned, but was worth it. Remember the thumpity-thump faux cobblestone paving that shook your fillings loose? That cost an extra $40k.

Despite the complete lack of input on the project by the public or any other governmental body, the URA plowed ahead on building the new roadway that autumn. Suggestions were made on its name: Main street, Burbank Plaza, Central Plaza, Rosacino or Mendorosa avenue. Hugh Codding took note of all the heavy construction equipment parked on the square and quipped it should be named the “Demilitarized Zone.”

“Old Courthouse Square” was chosen as the name for both the street and the plaza on its west side (which wouldn’t be built for another year). Street signs were erected at both ends with “Old Court House Square” [sic] lettered in Ye Olde English style because Santa Rosa was apparently founded by Sir Walter Raleigh.

The ribbon cutting was November 5, 1966. Mayor DeMeo gave a shout-out to the city’s founders, albeit one slightly incoherent: “Their gift to the city even now is more enhanced than originally.” That was followed by a “Parade of Progress” where antique autos and the latest models thumpity-thumped in both directions. There was soon a traffic jam on the Fourth street side.

Aside from the roadway and the adjacent sidewalks, no other work was completed in 1966. Exchange and Hinton avenues were still open and the little west side plaza was to come the following year. As for the east side of Courthouse Square, the URA had big plans – to sell it off. “For Sale: 26,000 sq. Feet” read a Press Democrat headline.

NEXT: WHO OWNED COURTHOUSE SQUARE?