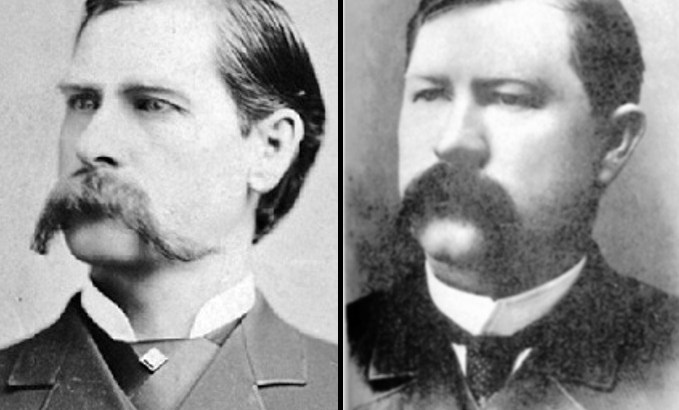 Yes, Wyatt Earp was in Santa Rosa! His brother, Virgil Earp, was too! But, uh, not the ones you think – they were the nephews of the famous lawman and gunslinger. Yet it’s also true their legendary uncle Wyatt passed through town at times.

On one of those occasions the Santa Rosa Democrat interviewed the famed man in 1889 and wrote, “Wyatt Earp is little given to talking about himself. And yet he has a reputation as wide as the continent — a fame made by deeds rather than words.” Wyatt Berry Stapp Earp (let’s call him “Wyatt B.” for short) may have been modest, but since his death in 1929 there have been hundreds of books, movies and TV shows about him, Tombstone Arizona and the iconic gunfight at the O.K. Corral. A simple Google search on his name currently returns almost eight million hits.

(Above: Lawmen Wyatt Earp and Virgil Earp, uncles to the Earp men with the same names who lived in and around Santa Rosa)

Just scratch the surface of that enormous canon of work and you’ll find there’s lots of misinformation – a common theme includes authors insisting other authors are lazy, liars, if not bonafide idiots – and one of those false claims is that he owned or managed a stable in Santa Rosa, which you’ll even find in his biographical Wikipedia entry. It’s conceivable one of the nephews did so, although there’s no evidence of that either. Here’s what we know of Wyatt B. Earp in Santa Rosa from the newspapers of the time:

While San Francisco was homebase during most of the 1890s, Wyatt B. and his wife, Josie, were traveling and racing his horses. There are several articles available in the 1895 San Francisco Call that mention Earp then had a stable of trotters. Josie described Santa Rosa being on “the California circuit.” She explicitly mentioned winning in Santa Rosa because Wyatt B. was driving his primary racing horse, “Jim Leach,” and they had expected another of their horses in the same race would win instead.

Besides competing in Santa Rosa, Wyatt Earp had another reason to be here: Buying horseflesh. While Jim Leach came from the huge Rancho Del Paso stud farm near Sacramento, Wyatt was at the Santa Rosa racetrack in August 1889 to watch the races because he was “interested in the ownership of several horses,” as he told the Sonoma Democrat.

In an article in the Dec. 9 1896 Call over a lawsuit against him, Wyatt B. told the judge “he had some race horses, but they were leased by him for three years from a woman who lives in Santa Rosa.” That followed his claim of being penniless and owned only the clothes on his back. (If he thought it might work, I’ll bet he would have plead hardship because his poor wife was a widow.)

That’s the limit of what we know for a fact about Wyatt B. in Sonoma county. So what about those nephews who lived in or around Santa Rosa?

The eldest brother of Wyatt B. Earp was Newton Jasper Earp. He had two sons who he named after his famous siblings: Wyatt Clyde Earp (“Wyatt C.”) and Virgil Edwin Earp. As Newton was a half-brother to Wyatt B. the boys were really half-nephews to the lawman.

Wyatt C. (1872-1937) first appeared in local history living in “Mendocino Township, Sonoma” (Skaggs Springs/Dry Creek) in the 1900 census. He and his new bride were staying with her father and aunt. (The census taker mistakenly identifies Wyatt C. and wife Virginia as the farmer’s nephew and niece.)

In the 1903 county directory, Wyatt C. was a Healdsburg laborer, as he was similarly listed in Geyserville, 1905. (UPDATE: In 1904 he applied for a liquor license to open a saloon on Geyserville Road, next to the Petray Brothers’ Stable. h/t Katherine Rinehart.) As Wyatt C. was in his mid twenties in the years while Wyatt B. was racing, that guy could well have operated a livery stable in Santa Rosa. How he felt about his renowned namesake is unknown, but he usually dropped the Wyatt part of his name and went by Clyde. Make of that what you will.

The 1910 census found Wyatt C. farming in Snake River Wyoming (near Jackson Hole), but from the 1920s onward he was a carpenter living mainly around Sacramento. His was apparently a quiet life.

Not so his brother, Virgil Edwin Earp (1879-1959). He was known as Eddie at times but later embraced his “Virgil Earp-ness” with gusto. 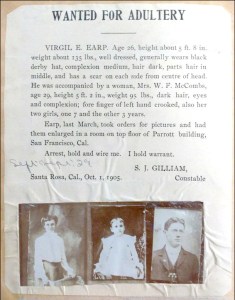 He seemed unable to settle down and had at least five wives 1902-1946. And that’s not counting the incident in 1905, when he ran off with his cousin’s wife.

Virgil took the Santa Rosa woman and her two daughters to San Francisco – although they left her son behind with his father. As he was still married to someone else, an arrest warrant for adultery was issued by our local constable. The papers in the city had a field day with the scandalous story, but the Santa Rosa papers wrote little. The woman reconciled with her husband a week later and returned, but there was no word of what transpired between Virgil and his wife, or even if he ever returned to Santa Rosa.

After that episode Virgil can be traced to Napa, Fairfield, Vacaville, Cloverdale, Washington state and Nevada. Like his older brother Wyatt C. he hovered mostly around Sacramento, although they did not live together.

Because he was in the Army Quartermaster Corps around the turn of the century, Virgil applied for a military pension in 1932 as an invalid and for Social Security in 1941. He seemed on track to end his days as a forgotten, impoverished, and probably friendless old man feeding pigeons on a park bench.

But then in 1958, fate came calling for Virgil Edwin Earp.

What launched this chain of events is unknown, but in March of that year Virgil and his daughter, Alice, found themselves on an airplane for New York City. He was invited to be a contestant on “The $64,000 Question.”

That was the most popular TV quiz show of them all, and there was plenty of competition. According to its Wikipedia entry it even beat I Love Lucy in the ratings; crime rates dropped when the show was on. And for five Tuesday nights Virgil Earp was the star, winning $32,000 for answering questions about the Wild West. One of those appearances can be viewed below.

Those shows turned Virgil into a celebrity – a real, live, rootin’ tootin’ relic of the Old West, and the press swarmed around him. The Sacramento Bee showed him cradling a .38 Colt that supposedly was the last one owned by uncle Wyatt. He talked some about his life (“I was raised right at the knee of Bat Masterson and poor old Doc Holliday”) and how he was gonna write a book someday.

A news service offered a three-part feature series “The Real Wild West” about his life – “a story of fighting men, of liquor and sporting women, stud poker and revenge.” He said he was born in Tombstone, Arizona inside a covered wagon, that he was named sheriff of Paradise Valley Nevada at 18 and killed three men before he reached age 21. He was part of the posse uncle Wyatt B. formed to ride down to Mexico and avenge the death of Morgan Earp. He operated two gambling halls in Sacramento.

It was all complete bullshit.

In truth, he wasted his life bouncing between nondescript jobs – a laborer when he was young, a carpenter, grocer, salesman (both retail and door-to-door selling sewing machines) and collector for the San Francisco Chronicle. He was born at the family home in Kansas, as were his brothers and sisters. Virgil knew about Paradise Valley because his parents lived there when he was a quartermaster; he wasn’t a sheriff or law enforcement officer there or anywhere else. A researcher has put together more details debunking other lies.

No one questioned his fable then (and very few do now, for that matter) and when he died a year after his quiz show glory, newspapers nationwide ran the Associated Press obituary repeating his tall tales and glorifying him as “the last of the fighting Earps.”

Now almost completely forgotten personally, he happened to die when there was enormous interest in the Old West. It’s doubtless some of the widely-printed nonsense he spewed in 1958 about his uncles, their friends and the Genteel Art of Gunfighting seeped into resources about the Frontier West accepted as fact.

The $64,000 Question was cancelled months after his appearance when it was discovered some of the other quiz shows were rigged. Virgil was asked if he had been coached on the answers and he snorted indignantly: “Who could tell me anything about the West?”

Actually, Virgil, you were really no closer to the West than any other salesman or store clerk who read popular cowboy or “historical” magazines and dreamed of being Buffalo Bill, Wild Bill Hickock or that great lawman, Wyatt Earp. Unfortunately, people believed everything you said because of that famous name.

Virgil Earp Runs Away From Santa Rosa With Mrs. W. F. McCombs and Her Children

Special Dispatch to The Call.

SANTA ROSA, Oct. 2. — W. F. McCombs returned here from Sacramento last night to find that his wife, Mrs. Maude McCombs, had left the family home on Thursday with his two daughters in company with his cousin, Virgil E. Earp. Earp left a wife here. The couple went to San Francisco, from where Earp sent back $100 of his wife’s money, which he took with him when he left. In the same letter he said he would send later for her clothing.

This afternoon McCombs and Mrs. Earp appeared before Justice A. J. Atchinson and told their story, after which McCombs swore to a warrant for the arrest of the couple. In speaking of the matter McCombs said:

“I am done with my wife and will never take her back, but I want the children, and will fight for them to the last ditch. She took the two girls and left the boy. One of the girls is 2 years old and the other between 6 and 8.”

“We have found that Mrs. McCombs and my husband left for Petaluma last Thursday and stayed there all night. They then went to San Francisco. From there my husband sent me the $100 of my money which he took away with him when he left. I would not turn my hand over to stop him, but am willing to do what I can to help Mr. McCombs to get his children. I am done with Earp.”

The warrant was placed in the hands of Constable S. J. Gilliam and he will make every effort to capture the runaway couple.

Mrs. Mande McCombs, who eloped from this city last week with Virgil Earp, taking her two children with her, returned home yesterday. Earp is still absent.