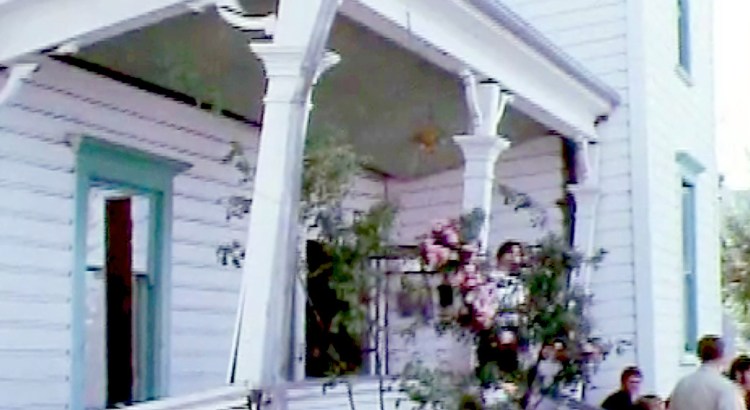 Imagine (or remember): It was near the end of that day in 1969 and you were winding down, watching TV and planning to stay up late – a Johnny Carson anniversary show was coming up and everybody would be talking about it the next day. You were deciding between the 10 o’clock news on channel two, Hawaii Five-O or that new NBC series by the former Press Democrat reporter.

Then too much happened all at once.

“And then came the jolt and the furious shake, lasting for seconds but seeming like minutes. Everyone could feel it but many couldn’t see it: the lights were the first to go,” said Dick Torkelson’s article in the Press Democrat the next day.

Earthquake! A bad one. Sharp flashes of light from outside flooded the dark room as if the house was struck by lightning, only there was no sound at all. Omygod, had Santa Rosa been hit by an atomic bomb?

“Books and dishes cascaded down,” Torkelson continued. “Shouts filled households as parents groped in darkness for their children. Residential streets filled instantly, everyone wondering if there would be more.”

Such were the first few terrifying moments of the Santa Rosa Earthquake of October 1, 1969. Earthquakes, actually, as another one followed about eighty minutes later and was just about as violent (see sidebar).

No one was killed and while many buildings were damaged, none fell down. Now more than a half-century later, it’s only remembered for the unusual double shake. But that event changed Santa Rosa’s future dramatically, as it became the driving justification for the city to later bulldoze 30 acres of downtown in order to build the shopping mall – the worst mistake in the long list of planning mistakes made by the City of Roses. How this tragedy unfolded will be told in upcoming parts of this ongoing series, “Yesterday is Just Around the Corner.”

Dick Torkelson felt the quake at his home near Hearn Avenue and jumped into his car. “Traffic along Santa Rosa Ave. became wild, up to 70 miles per hour wild.” He saw the light flashes in the sky over downtown and expected to find a massive gas explosion had set the city aflame.

Instead he found the downtown lit by only a half moon and men with flashlights. “The streets on Fourth and Fifth and Mendocino were black, almost eerie. And broken glass covered the sidewalk; you crackled as you walked.” When the big plate glass display windows in the clothing stores shattered their mannequins tumbled into street; practically every newspaper that covered the story would feature a photo of their disturbingly dismembered torsos.

Electricity was restored within 15 minutes but already there were a hundred cops pouring into the area, setting up barricades as merchants arrived to board up windows. There were fears of looting, but it was later determined that the only theft was $500 worth of cameras which were in the window of a shop on Fourth and some clothes from the Montgomery Ward’s on Mendocino.

By midnight, Bay Area newspaper reporters and TV crews were swarming over the town (supposedly it was rumored in New York City that Santa Rosa had been completely destroyed). Columnist Gaye LeBaron was contacted at home by a broadcaster at the CBS affiliate in Los Angeles who wanted to know about conditions in town. She looked out her window and told them her street was wet because a water pipe had broken and a crew was working on repairs. She later learned it was reported “water was gushing high in the air from broken water mains.” LeBaron also wrote later that some of the local papers weren’t much better: “The main story in one of the San Francisco papers on the quake sounded as though the news team got as far as the Miramar [a cocktail lounge at Third and Exchange] collapsed wall, found the bar open, bellied up to the plank, and never looked farther.”

(Let me interrupt with a word of appreciation for Press Democrat News Editor Dick Torkelson and Managing Editor Art Volkerts. As the quakes struck late at night, readers would have understood if there were only cursory details in the next morning’s paper. Instead, the staff managed to publish five pages of photos and solid reporting. Although the PD of that era infamously allowed editorial bias to slant its news coverage of city and county issues, this was heroic journalism and showed that in its bones the Press Democrat was actually a fine – even great – newspaper.)

There were only two fires that night, which was incredibly lucky because there were wind gusts. Don’s Park Auto Super across from the Junior College was partially burned and there was a chemical fire in a Memorial Hospital laboratory after the second quake. Let’s take a moment to remember that the hospital sits directly on the Rodgers Creek Fault, which is overdue for a quake that is expected to cause a major disaster.

And, of course, there were the oddball stories:

As midnight approached on that cool autumn night, many Santa Rosa families were found camped out on their lawns and not because their house was damaged. Many were likely fearful that those earlier shakes were only the prelude to a catastrophic earthquake as severe as magnitude 9, which would either flatten much of the state or dunk it into the Pacific.* They feared that because the press had spent much of March and April scaring the willies out of everyone with doomsday talk. 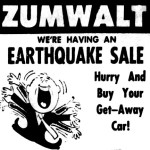 (RIGHT: The Zumwalt used car dealership got into the act with April, 1969 ads: “Before we slip into the ocean…buy your get-away car!”)

That spring, newspapers and magazines were competing to run the scariest what-if stories about California’s imminent destruction, usually repeating warnings from psychics and fundamentalist clergy that we were on schedule to sink into the briny deep, probably around mid-April. Experts, including Dr. Charles Richter (I was deeply disappointed that his first name wasn’t “Magnitude”), predictably debunked the predictions but it didn’t stop the flood of such nonsense. SF Chronicle columnist Herb Caen was contacted by papers in New York and London to ask if we were prepping to meet our makers. “They don’t seem to believe me when I say we’re not doing anything about it.” Still, local media joined the party; channel 4 offered a special “The Next Great Shake” (“with the aid of special effects”) and the PD printed fear mongering UPI summaries of what others were saying, along with many letters to the editor from stressed-out subscribers.

When the sun came up the next morning everyone had a chance to walk around for look-see. It was bad, but it wasn’t bad bad.

Downtown store windows were mostly boarded up, although workers were already replacing some of the plate glass. The Rosenberg office building at the corner of Fourth and Mendocino had some collapsed ceilings and much fallen plaster. The Miramar at the corner of Exchange and Third was a mess, with the parapet fallen off and the fire escapes dangling precariously from the three-story building. The Roxy theater at Fifth and B also had broken fire escapes, and parts of the ceiling had fallen on the audience of the adult-only movie house (“Escorted Ladies Free”).

The residential disaster tour centered on looking for crumbled chimneys, of which there were many (Comstock House lost its southern one). Beaver street, which is very close to/directly over the fault line, was hard hit, with the foundation crumbling on an older house at the corner of College Ave. The plantation style “Beaver House” at #610, which was first built way back in 1850 by James A. Cockrill, Jr. was considered damaged beyond repair. (Photos below.)

Beyond that, much of the damage was to public spaces and repairable, though expensive. The JCPenny at Coddingtown flooded when their sprinkler system broke. Cracks were found in the support columns for the two year-old county social services building. The Veteran’s Memorial needed $40k in repairs and fixing the fairground grandstand cost $15k. The onramp to highway 12 overpass dropped a few inches, which can be seen in the videos.

And here is where our story shifts from being the tale of a forgettable earthquake into a tragedy about destroying a town’s core. In the critical week following, the City Council set Santa Rosa on a course that would end with the demolition of nearly half of downtown in order to build the shopping mall.

It began as the city building inspector condemned 14 buildings as completely unsafe. Besides five homes, there was the Fremont Elementary School, Roxy Theatre, the Miramar, the Red Derby and Til-2 cocktail lounges, Court Market, the Orthopedic Brace Shop, Western Union office and Santa Rosa Hotel. As far as I can tell, none of these structures were in the west of B street area which would be soon slated for destruction.

Far more significant was a mod to the building code passed in a special session of the City Council on October 9. There would be relaxed enforcement for a year as property owners decided whether damaged buildings could be brought up to modern code standards. After that, it “required closing any building open to the public which is not capable of safely supporting all loads caused by the forces of gravity as defined in the building code and which is hazardous to use,” as reported in the PD.

In a followup meeting Oct. 28 to decide an “interim emergency policy,” city leaders were told a committee of civil and structural engineers thought 21 downtown buildings should go. The city’s chief building official said 48 were damaged. But the issue really wasn’t which buildings should be repaired – it was whether the city would allow owners to make repairs at all instead of demolishing the place. Under the proposed guidelines, structural engineer Richard Keith pointed out, “If we use the code as it is today, we’d probably destroy most of downtown.” 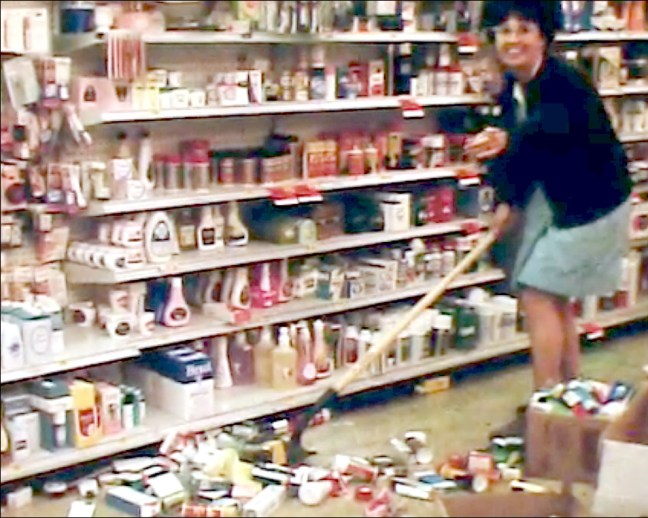 2 thoughts on “THE QUAKE THAT CHANGED EVERYTHING”