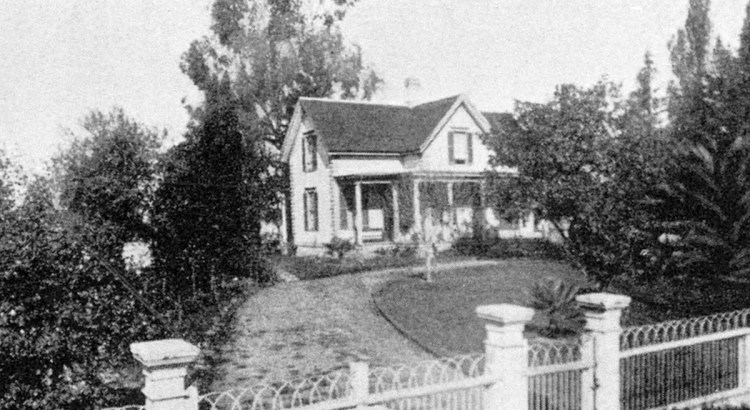 Take a look at the map below; it’s a section of the 1876 bird’s eye view of Santa Rosa. The arrow points to the house at 759 Mendocino avenue. It still exists, but not a single other building in the picture. In fact, there are only five places left in town that are this old, including Luther Burbank’s house. Others include two of the Metzger houses on B street (1868 and 1869), the Church of One Tree (1873), and possibly the Church of the Incarnation (1873?).

A developer has plans for a high-density project on the site which includes moving the house from its historic location, shifting it forward to within fifteen feet of the sidewalk and pushing it as far to the north side as legally possible. Whether or not that’s a big deal depends on whom you’re asking – and when. Our ancestors moved houses around as if they were toys in a sandbox, but this is in one of Santa Rosa’s few Preservation Districts, which seeks to protect “the historic character of the structure and the neighborhood.” Complicating matters further is that the proposed move would block the public’s view of Comstock House, which is listed on National Register of Historic Places. We’ll see how this works out; the first meeting on the project is tonight (Feb. 1, 2017) at City Hall and another on February 8. Updates will appear on my OldSantaRosa Facebook page. [UPDATE: The developer backed out of the project but the property was sold and is currently used as a rental.]

The home was built ca. 1872 by Josias Davis, a real estate developer who subdivided sixteen acres on both sides of College avenue as an addition to the city (PDF). For years the wedge of two short blocks between Adel’s restaurant and 10th street was called Joe Davis’ street in his honor, even though residents repeatedly begged city council to change it. If they played Trivial Pursuit back then, “Where is Joe Davis?” would have stumped nearly everybody.

Josias suffered chronic health problems and was cared for by his only child since the boy was in his teens. After his parents died Walter continued to live at that house until his own death in 1916.

Between 1880 and 1915 probably everyone in town knew Walter S. Davis. He was an independent insurance agent but often mentioned in the papers for a wide range of other activities. He was a volunteer fireman, an elected city official (City Treasurer twice), a hop grower, speculator in Arizona and Southern California oil wells (his “Senta Oil Company” had a downtown office where he would sell you a share for a quarter), mortgage broker and real estate investor. He was a Mason and a leader of Santa Rosa Elks’ lodge which was no small thing after the Great Earthquake of 1906, as the Elks’ did more to organize relief efforts than anyone.

Davis had a lighter side and sometimes silly items about himself would popup in the Press Democrat, such as the time he was praised as a great fisherman for landing a prize catch at the grocery on his way home. He had a peach tree which produced fruit from May until October and twice the Press Democrat marveled at its bounty, even though the newspaper was trying to appear more cosmopolitan and rarely mentioning freakish fruits and vegetables.

The oddest item about him appeared on the Fourth of July, 1905. It was all nonsense, but apparently he got drunk with his new neighbor, James Wyatt Oates, who had recently moved into (the home which would become known as) Comstock House. Together they prepared a balloon containing a message for President Teddy Roosevelt, launching their airship by smashing a bottle across the prow. And it was a bottle of good stuff, too — that beer newly imported to the West Coast called Budweiser (see “THE VOYAGE OF THE ‘AER FERVENS‘”).

Walter’s wife, Evelyn, died after a long illness in 1902, when their daughter Alys Marie was only five. He remarried a couple of years later and the renewed Davis’ family was close, with Walter, wife Ann and his daughter often mentioned in the society columns for outings and visits to the City. He seemed particularly devoted to Alys, taking her along on business trips. When she was three Walter and his first wife threw a birthday party for her that was so swell there was a writeup in the PD. 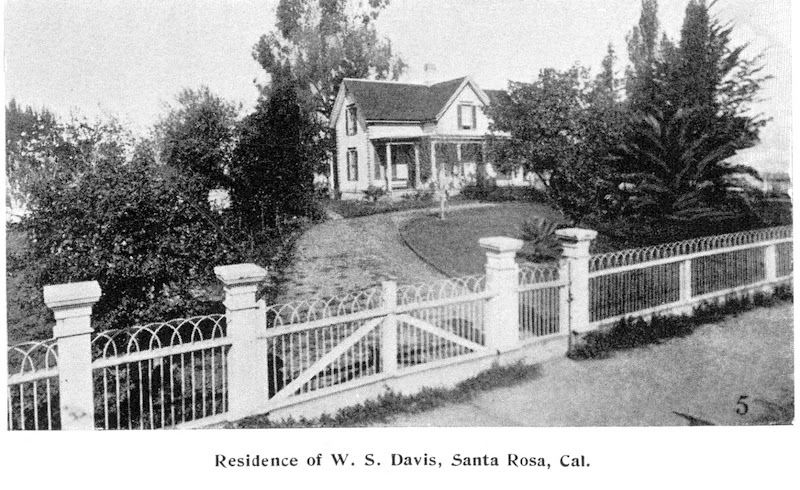 After Walter died his wife and daughter rented out the house for about 25 years. The next owner was the sister of Helen Comstock, who lived next door. During the WWII housing shortage Frances Finley Nielsen and her husband Anders converted the home into four apartments and built four garages. Pretty much everything we see today is the same as it was soon after the war.

Two surveys have looked at the place and noted it was a “potentially historic property,” but it’s never been awarded landmark status because the house is plain (although Burbank’s home is likewise a simple farmhouse) and Josias and Walter just weren’t important enough to care about. Too bad they weren’t interviewing people after the 1906 quake; apparently none of his insurance customers had claims denied or were forced to settle for less. Considering some in Santa Rosa ended up fighting their insurance carriers in court for up to five years, Walter must have been viewed as something of a miracle worker.

Walter S. Davis, the well known insurance man of this city, came to Santa Rosa forty years ago this month. Of course he was a very young man then, and people can hardly realize that he has attained the age he has on account of his youthful appearance. Mr. Davis is widely known throughout this section of the state, and is one of the best known insurance men in northern California.

A delightful juvenile event and one which will long be remembered by the little guests was the birthday party given at the pretty home of Mr. and Mrs. Walter S. Davis on Healdsburg avenue on Saturday afternoon. The occasion was in honor of the third birthday of their winsome little daughter, Alys Marie.

During the afternoon the guests played all manner of games, enjoying every minute of the time thus spent. Of course the birthday feast was a great feature for them. The tables with their floral decorations were laden with innumerable dainties, not to forget the center of attraction — the magnificent birthday cake. In the entertainment of the guests, the mother of the petite hostess, Mrs. Davis, and Miss Nan M. Orr, and the Misses Alma and Clara Elnhorn assisted. Those present were the little Misses…

The McKittrlck now enjoys the reptation of having the two largest oil wells in California, namely, the McPherson and the Dabney. From the Bakersfield Morning Echo of the 11th inst, it is learned that the Dabney Oil Co., operating on lands leased from the El Dorado people, has Just completed its well No. 5, and at noon on Wednesday, as soon as work was finished, the well commenced to flow at the rate of 2000 barrels a day and is still gushing.

This well is within less than three miles of the Seanta company’s holding. The directors and friends of the Seanta Oil company are jubilant over this new strike. Stock in the Seanta is still selling at 25 cents a share.

Those wishing to purchase may call on any authorized agent or at the company’s office, 445 Fourth street, W. S. Davis, secretary.

Colonel Walter S. Davis, the wellknown insurance man. has a fine garden at his Healdsburg avenue residence, in which he takes considerable pride. The Colonel has a remarkable peach tree on his place. Eighteen years ago he bought the peach tree in question from John Louis Childs, the noted seedsman of Philadelphia, and it has been bearing fine fruit for many years. The peaches ripen among the earliest in May.

A couple of years or so ago, some distance up the trunk of the tree, a branch grew out and now, near the latter part of October, It is bearing a fine cluster of ripe peaches. A Press Democrat representative on Saturday secured a branch on which hung fine, highly colored peaches and in the office during the day the branch and its fruit attracted considerable attention. it is certainly something of a novelty to have a peach tree, a part of which bears the earliest variety of peach, and the other part the latest.

W. S. Davis brought to this office on Monday a peach from a tree in his yard on Mendocino avenue. The peach has something of the nectarine appearance, and is said to be the earliest variety known. The flavor is most pleasing as the writer can testify from a personal knowledge.

This item is absolutely stuff ‘n’ nonsense, which raises the question of why it even appeared in the Press Democrat. Certainly stories sometimes had tongue-in-cheek slants; just a few weeks later, for example, W. S. Davis again was in the news, this time as a great fisherman who landed his prize catch at a grocery on the way home. But in my readings, such a completely fantastic yarn is unprecedented in either Santa Rosa paper of this era.

Today we likely can’t unravel all the inside jokes and cultural references here; “Aer Fervens” is elementary Latin for “hot air,” and the general ridicule of aviation may relate to editor Finley’s belief that nothing would ever become of these flying machines, as shown in his op/ed discussed in the following post. Oates is, of course, the first owner of Comstock House, and Davis was his next-door neighbor. Ads in other California newspapers for St. Louis-brewed Budweiser began appearing after the 1904 World’s Fair in St. Louis, so perhaps the beer was viewed as an exotic import around Santa Rosa at this time.

Last night at 9 o’clock the new skyship “Aer Fervens” mounted to the clouds from the grounds of the residence of its inventor and builder, W. S. Davis; and after steering a zigzag course for a few minutes, just as a carrier pigeon does in geting its bearings, the new craft turned its nose to the southwest and followed a straight course over the hills and toward Bennett Valley.

A “message” was sent to President Roosevelt apprising him of the airship’s flight; and the President responded with congratulations, and the announcement that he had appointed the inventor to the rank and station of “Rarest Admiral” in the navy, and assigned him to the command of the aerial fleet. For many months “Rarest Admiral” Davis had burned the midnight oil in working upon his invention. Last night his efforts were crowned, and he was a proud man as he watched the product of his hands and brain soar among the clouds, and disappear over the hills.

The launching of the skyship was attended by appropriate ceremony. Colonel J. W. Oates, who is financially interested in the enterprise, sang “Up in a Balloon,” and the inventor broke an empty Budweiser bottle over the prow as the vessel mounted skyward. The “Aer Fervens” is equipped with wireless telegraph apparatus, by means of which the following message was sent to those who were waiting: