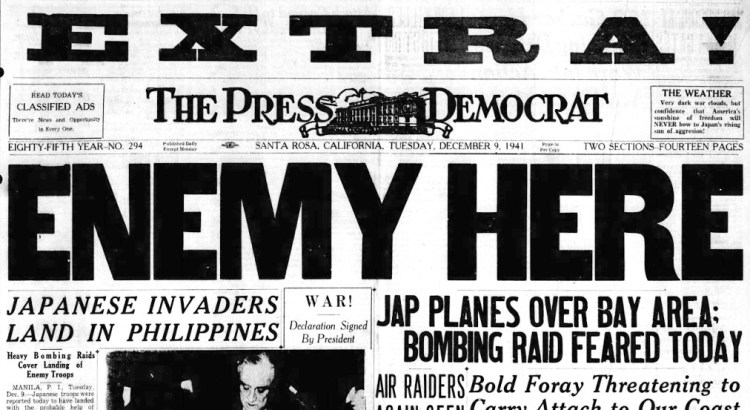 Sonoma County was at war, and it came as quite a surprise. Not the part about fighting between the U.S. and Japan; anyone who made a passing glance at a newspaper front page in early December 1941 knew the odds of war were almost certain. What shocked us here was to suddenly discover we were probably on the front lines. War was something that happens far away in another country – never in the street in front of your home.

In the first hours after the surprise attack on Pearl Harbor our Sonoma County nerves were frayed. Was Japan about to likewise target the West Coast? Civil defense plans were hurried into action with calming remarks from authorities that the situation was in hand. Less reassuring was discovering their top priority concerned getting ready for mass casualties. (For more on Dec. 7 1941 see the previous article, “EYEWITNESS TO INFAMY.”)

The next day (December 8) saw frantic mobilization. Hundreds volunteered to guard public utilities from sabotage, direct traffic during an emergency or serve on rescue squads, while 96 men were sworn in as members of the armed Home Guard. Volunteer firemen were ordered to stay on 24 hour alert. In Santa Rosa it was a day like we had never seen before or since: Downtown must have resembled a hive of bees, with all those men rushing in and out of the courthouse, housewives with shopping lists to prepare for wartime food shortages and everyone on the street sharing their worries and any news about relatives/friends in Hawaii.

And then come nightfall, the Army made everything worse.

In that era radios were usually playing music in the background with some timeslots tending to niche programming. Between 5 and 6PM was mostly the children’s hour, with Captain Midnight, Tom Mix and other popular 15 minute adventure serials (KSRO was airing The Cinnamon Bear, a perennial Christmas series). After that came the news and sports half-hour from 6 to 6:30, although stations usually padded it out with music – at 6:15 KSRO normally switched over to playing records in a segment imaginatively named, “Music to Eat by.”

But the broadcast schedule that Monday was anything but usual. At 9:30 in the morning listeners to KSRO or any of the major San Francisco stations heard live President Roosevelt’s “day of infamy” speech to Congress, followed later by Winston Churchill’s address to Parliament. War bulletins read by local announcers peppered the airwaves at least every 15 minutes. So when it was time for the regular 6 o’clock news programs, you can bet every Sonoma County radio dial was tuned in to hear the latest war news.

Then KSRO and all other Bay Area radio stations suddenly went off the air.

None of the surviving newspapers from that day mention whether or not the stations had a chance to explain why they were going silent, but apparently nearly everyone presumed we were under attack.

An editorial in the Santa Rosa Republican the next day gave a sample of the hysteria that swept the town:

There was certainly chaos in San Francisco after the air raid sirens wailed. Unsure about blackout orders, some people and businesses killed their lights, others didn’t or turned off just a few. Many drivers tried negotiating the city’s hilly streets without headlights, but far from all. A young woman named Marie Sayre was paralyzed after a rookie member of the State Guard shot at their car after her husband failed to pull over on the Bay Bridge onramp; the private was told to stop “anything strange” he saw.

There were no blackouts in the county, but when the alarms sounded the newly-sworn volunteers jumped into action, with 40 men reporting to the Santa Rosa police station within five minutes. Firemen and forest rangers prepared to fight conflagrations, and ambulances stood ready to rush the injured to the nearest hospital, each with a full medical staff waiting in readiness.

The all-clear siren announced the air raid was over about 9PM. Afterwards the War Dept. in Washington declared it all was just a readiness drill, but the Fourth Army commander insisted it was absolutely the real thing and there were “sixty unidentified planes” that came as close as 20 miles from Point Reyes. The radio stations had been ordered off the air so broadcasts couldn’t be used as “guiding beams” for approaching enemy aircraft.

Then a few hours later, at 2:30 on Tuesday morning the alarms again sounded and brought out the weary volunteers. This time Santa Rosa and Petaluma were prepared enough to turn out streetlights. The county hospital covered windows with blankets while nurses at the Petaluma hospital worked in the dark using flashlights. It was another false alarm and lasted until about 4AM.

During the early morning alarm authorities received several calls from people claiming to hear the heavy throbbing of big airplane engines overhead. Residents of Bennett Valley, Graton and the transmitter operator at KSRO all said they heard them, but could see nothing because of the thick fog.

The next day (Dec. 9) a communication mixup led to a shutdown of the Bay Bridge at evening rush hour, resulting in a backup of an estimated 20,000 vehicles. There was also an hour-long alert which ended at midnight after a low-flying plane was spotted near Bloomfield and Jenner which was later identified as a Navy patrol.

The latter incident was also the start of a new wave of rumors that mysterious flares were being dropped from planes. Callers from Fort Bragg said 10-15 were seen close to the shore, and in following days there were claims of flares being dropped around San Francisco. These stories were likely seeded by front page news of Japan’s attack on the Philippines, where flares really were being used to guide bombing raids.

Also on the 9th there was a quite unusual press event after the War Dept. in Washington said there was “no means of verifying the report” of hostile planes approaching anywhere on the coast. Instead of admitting mistakes could have been made, Lieutenant General John L. DeWitt, commander of the Fourth army and top ranking Army officer on the West Coast, dug in his heels like a petulant four year-old.

In an address to civil defense workers, a peevish and angry DeWitt said it would have served San Francisco right if the city had been bombed:

After a lengthy tirade about civilians failing to obey his orders for a total blackout, he turned to threats: “If I can’t knock these facts into your heads with words, I will have to turn you over to the police to let them knock them into you with clubs.”

DeWitt wrapped up by making it clear he would not tolerate being questioned or criticized by the press or public:

There’s more to the story the military’s December 8-9 false alarm SNAFU and others share blame with DeWitt, but this local history journal ain’t the place to dig into all of it.1 (Spoiler alert: The mistakes mostly came down to miscommunication along the chain of command, technicians having problems calibrating their newfangled radar gear and poorly trained radar operators.)

During those same days the government started arresting unnaturalized Japanese residents in Sonoma County. Although Santa Rosa Mayor Robert Madison said on Dec. 7 that citizens of Japanese descent “have no cause for alarm,” eight Japanese men were taken away as “suspicious aliens” by the FBI the next day.

Two each were from Santa Rosa and Petaluma, three from Sebastopol and one was from Forestville. Except for well-known Santa Rosa grocer Yoshio Nagase, all were apparently farmers. “Local authorities said the men had been under surveillance for several weeks as suspects in activities of subversive nature,” the Press Democrat reported. Overall that day 91 Japanese men were arrested in California, along with sixty Germans and 16 Italians.

That was just the prelude. Ten days after his fit over blackouts, DeWitt called for the Army to “collect all alien subjects fourteen years of age and over” and relocate them away from the West Coast. Over the following weeks his views of people with Japanese ancestry continued to harden and after President Roosevelt signed the infamous Executive Order 9066 (on DeWitt’s urging) in February 1942, DeWitt commanded the internment of 110,000 Japanese Americans.2

In those days after Pearl Harbor no one could foresee that such an extreme and unAmerican action would be launched in just a few months, but a hundred members of the Japanese American Citizens’ League of Sonoma County still met in Petaluma to condemn the attack by imperial Japan and vowed to watch for saboteurs and anti-government activities.

Also fearful was Santa Rosa’s Chinese-American community, led by Earl Jann, manager of the National Dollar Store on Fourth street.3 He appealed to the Chamber of Commerce for help and they rushed into production white silk ribbons with an American flag at the top and text reading “I Am Chinese.” The 2×6 inch ribbon also included an ID number and that it was officially “issued by the Chinese committee of the Santa Rosa Chamber of Commerce.”

By itself that was not unusual; in December the Chinese consulates in San Francisco and elsewhere issued ID cards (the consul in Seattle said it was done “to avoid an unpleasantness”). In some places lapel buttons were made with the same message or displaying China’s flag.

But it was noteworthy the Santa Rosa ID ribbons were printed so expeditiously, just three days after Pearl Harbor. That may have been because both Santa Rosa newspapers implied there had been assaults: “Reports of attacks on several Chinese by excited persons, who apparently mistook them for Japanese, and took unauthorized mob action, occasioned the chamber’s move,” the Press Democrat said.