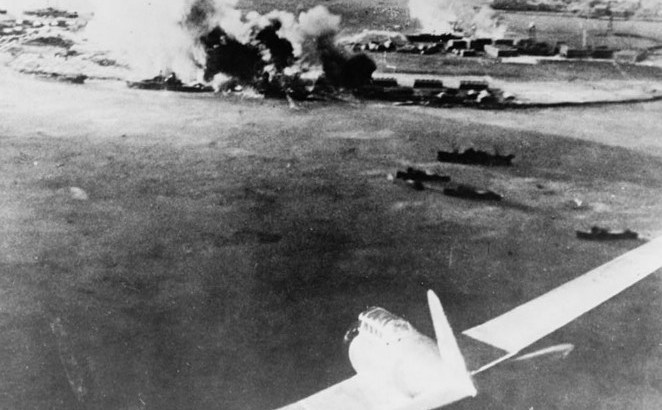 The story of Santa Rosa during the opening days of WWII begins with Roy Vitousek – the first American eyewitness to the start of the war. He was from Santa Rosa and Healdsburg; just more proof a local Believe-it-or-Not! footnote will turn up for nearly any chapter of our nation’s history. Sonoma County: Come for the wine and the redwoods, stick around for our mile-high stack of intriguing backstories.

It was not long after sunrise when Roy took to the air in his private plane. Taking a quick spin was a Sunday morning ritual for him and his teenage son; there was no reason to believe December 7, 1941 would be any different than all the times before.

After flying for about an hour they headed back to their home base, the John Rodgers Airport (now the Kalaeloa Airport) a few miles southwest of Pearl Harbor. Another small plane was also preparing to land, so they looped around to make another approach. Roy’s son, 17 year-old Martin described what happened next:

Their little high-wing Aeronca was now smack in the middle of the initial assault wave on Pearl Harbor. He saw two enemy planes shot down above them and thought another hit the water, although Martin said it might have been dive bombing. “All in all, we were in the air for ten minutes throughout the first attack before we were able to land.”

Once on the ground, they were amazed to find their airplane was undamaged – there was not a “pin-prick in the ship,” Martin said. They were also lucky to not have landed in their first attempt; the airfield had been strafed with the manager of the flight school killed. A Hawaiian Airlines DC-3 preparing to takeoff was pockmarked by bullets but no passengers were injured.

This amazing tale was almost lost in the avalanche of other news about Pearl Harbor, getting its modicum coverage in the Honolulu Star-Bulletin and Press Democrat only because of who was flying the plane. Roy Vitousek was a prominent Hawaiian lawyer and legislator, elected several times as speaker of their Territorial House of Representatives. A native of Healdsburg, Roy attended Santa Rosa High, practiced law in Santa Rosa and was city clerk 1913-1917 before moving to Honolulu in 1919. He remained well known here, having returned for a visit just a few months earlier. (Roy was 51 and his parents still lived in Healdsburg.)

News of the Pearl Harbor attack reached the Mainland just before noon Pacific time (Hawaii being three hours behind the West Coast) and KSRO announcer Gordon Roth read the first bulletin on its 12:15 Sunday news program. The station would remain on the air past its usual 10PM signoff until after midnight, updating listeners every fifteen minutes.

But you can bet few were relying just on KSRO; the big San Francisco stations, with their live broadcasts from the East Coast, were interrupting programs with the latest info as it arrived (listen to a short compilation).

San Francisco was in a panic – as was pretty much every other community on the West Coast – expecting sabotage or an invasion or Pearl Harbor-like attack was imminent. (Japan did launch balloon bombs against the U.S. but not until 1945; see “WHEN JAPAN BOMBED SONOMA COUNTY.”) The SF mayor declared a state of emergency and tripled the number of guards on the city’s water supply system. Employees of the central switchboard handling police and fire calls were issued guns. Unions were ordered to drop labor disputes. Japantown in the Western Addition had a policeman on every block. A false report of an enemy plane sighting caused an hour-long blackout of the Golden Gate Bridge; the last car to cross was driven by Judge Hilliard Comstock, returning with Helen from a weekend stay with their friends in San Jose.

In Santa Rosa, an emergency meeting was held by the Civil Defense Council.* Per their prepared guidelines, they ordered patrols around water supplies all over the county plus guards on strategic bridges and the KSRO transmitter. All hospitals were to have a doctor, nurse and two first-aid providers available around the clock. No sales of guns, ammo or explosives were to be made without written consent of the local chief of police.

The county health officer announced his laboratory would be testing water samples for “contagious diseases that might arise as result of the emergency” and the coroner said he was training deputies on how to identify “possible victims of sabotage activities.” Those with longer memories might have recalled the Council earlier sought out warehouses that could be used for temporary morgues. That all plans centered around contingencies for mass casualties made no one uneasy, I’m sure.

The local captain of the Highway Patrol said he would appeal for 75 men who had a car or motorcycle (plus a firearm) to serve as reserve traffic officers, but people were already coming to the the sheriff’s office to signup for civil defense duty. “A crew of volunteer girls and women is at work in the district attorney’s office sorting questionnaires in order to select personnel required for auxiliary police and fire departments needed in event of emergency,” the Press Democrat reported.

Also: All non-military aircraft was ordered grounded nationwide. The 22 Bodega Bay fishing boats were tied up at the dock under Navy orders. The phone company asked that no one make long-distance calls in order to keep the lines clear.

Santa Rosa Mayor Robert Madison urged residents to “go on about your daily life as usual, and continue with plans for your Christmas shopping.” The PD noted he told Japanese-Americans here to “continue business as usual” because “they have no cause for alarm.”

Despite those calming words, those who managed to sleep that night likely had the worst nightmares of their lives.

NEXT: THREE DAYS OF FEAR ITSELF