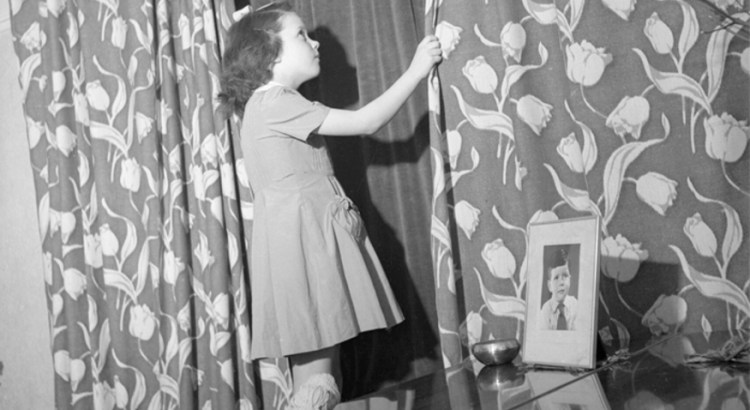 Blackout! In the week after Pearl Harbor, Santa Rosa was hit with “future shock” as the war descended upon us. The blackouts drew everyone’s fevered attention; they made it apparent our lives had changed for the worse – and would likely stay unsettled for a long, long time.

Later they discovered there never were enemy bombers – the reports were all false alarms issued by the Army or hysteric rumors, such as the story of a dogfight with a dive bomber over San Francisco Bay.1 Yet at the time the fear was real and personal; it was the enemy reaching into your home, threatening the very lives of you and yours.

Problem was, there was no “How to Blackout” manual – so when the first two air raid alerts happened on the night of Dec. 8-9, no one knew what to do. There were no blackouts anywhere in the county for the first alert although during the later one Santa Rosa and Petaluma managed to at least turn out streetlights. (Full story found in the previous article.) 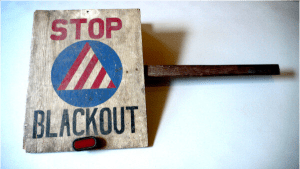 Directions from the Office of Civilian Defense appeared in newspapers nationwide on December 9th but were less than helpful: “Put out lights. Stay away from windows.”

Considering the urgency of the matter – had there really been bombers, that is – you’d expect authorities and/or the press would have offered detailed guidance on how to stay safe besides sitting in a pitch-black hallway or windowless room for hours (just imagine what hell that would be for families with little kids).

By the end of the week commercial options were available. The paint store began selling “heavy blackout paper” at 6¢ a sq. yard and lumber dealers were suggesting plywood (“after the emergency is over, panels can be salvaged and used for cutouts, furniture. built-ins, even wall-coverings”). Pedersen’s Furniture would install blackout window shades and the linoleum store on A street advertised blinds made out of linoleum. Civil defense insisted neither blinds or shades were adequate – windows had to be covered with dark cloth or all lights must be doused. The City Council backed that up by passing an ordinance making light leaks punishable by a fine up to $250 or 90 days. Police were also allowed to walk into any building to click off a light.

All well and good, but there was one other teensy problem that first week of the war: Santa Rosa had no air raid signal.

That Santa Rosa didn’t have a plan to alert citizens during an emergency must have stunned old-timers; thirty-ish years earlier, Santa Rosa was the City of Loud and Shrill Noises. Besides the steam whistle at the Grace Brothers’ brewery reliably blasting off at noon and five there were other industrial whistles and bells; when there was a fire or need to send the public a prearranged signal, the designated noisemaker would toot, scream or ring out a code.2

The day after Pearl Harbor it was announced the old bell at the former Fifth street firehouse would be used as the alarm, clanging three long rings and 10 short ones. “The huge bell, in disuse for several years, can be heard for several miles,” the PD said.

That plan lasted for a single day. The next idea was to park a firetruck by the courthouse and use its siren, at least until a large one with a range of seven miles arrived and could be mounted on the roof of the sheriff’s office. Now the signal would be one long blast “to be given intermittently within the discretion of the officer in charge” and two short ones meant it was all clear.

That night (Dec. 9) the firetruck siren was sounded at 11:05 due to the Fort Bragg false alarm described earlier, although many didn’t hear it or recognize it was supposed to be the new air raid signal. Police Chief Melvin “Dutch” Flohr said people should assume there was a blackout if city streetlights were off, but even that failed as a backup plan because not everyone had a lamp pole within easy eyeshot.

It was unworkable to allow every little town and hamlet to come up with its own unique air raid signal, so on the 11th the civil defense council for the Bay Area ordered a uniform signal for every county within a 50 mile radius. The alert would be a siren wailing up and down and the all clear would be a steady tone, both two minutes long – once Santa Rosa finally got its siren, that is.

Equally important was a new telephone system to network communities together. A special operations room would be built at the sheriff’s office staffed with women volunteers working in four shifts. Besides controlling the local siren, they were to be in charge of a switchboard that relayed the blackout orders to other towns in the county.

All this muddy confusion about window coverings and air raid alerts started during those chaotic three days after Pearl Harbor, when the wildest rumors were flying because the Army commander in San Francisco kept crying wolf. And while they surely meant well, it was not soothing to learn the local chapter of the State Embalmers’ Association was ready to ID and remove “fatally injured victims of possible bombing or sabotage.” As the week progressed Santa Rosa’s nerves became a little less frazzled but people were far from adjusting to their new normal.

The third night with a blackout – yet another false alarm – was December 12, which began with several accidents; some were trying to drive without headlights, leading to five hurt in a head-on crash on Chanate Road. A woman attending a Santa Rosa Grange meeting when the lights went out fell down a full flight of stairs, while an infant was burned after a parent spilled a cup of hot coffee (the PD item stated this was “another” incident, so apparently there had been one or more scalded baby already).

Police were called when Fred Hubner and Oscar Larsen of Healdsburg refused to switch off their lights, telling a civil defense volunteer they would “turn ’em out when we get damn good and ready.” They were jailed for thirty days each. And in Santa Rosa this happened:

The PD also reported kids ran amok through downtown during that blackout:

There was also a situation because the blackout clogged Santa Rosa’s streets, as the new stop-traffic ordinance required autos to immediately shut off even if the car was in the street or an intersection. As bad as it was, the situation was far worse in San Francisco where some streetcars were sliding down hills.

Despite those problems, the blackout of December 12th was the first in Santa Rosa deemed a success. It lasted between 7:30-10:00 in the evening, just when stores were crowded with Friday night Christmas shoppers. Unable to buy presents or even drive home in the darkness, some sought the company of John Barleycorn: “Bars and cafes were filled with patrons when the lights were doused. Many remained in the taverns, drinking by candlelight to drive off worries of air raids.” The movie theaters probably also had packed houses, as their ads vowed they would remain open during blackouts although their marquee lights would be dark. The Tower theater went as far as blurbing, “remember you are 99% safer inside.”

The traffic jam might have been a nightmare if it were not for all the soldiers on hand directing drivers to pull over as much as possible, even if meant double parking.

A few days earlier, on Dec. 9, some 1,200 members of the 17th infantry (7th division) had arrived in town on chartered Greyhound buses and trucks from Fort Ord in Monterey. Their mission was to guard the North Coast from the Golden Gate to Eureka, and the Sonoma County Fairgrounds would be their regimental HQ.

Their deployment was “one of the finest things that ever happened to Santa Rosa,” gushed Chamber of Commerce Secretary Dunwoody, and vowed the Chamber would “do all in their power to make their stay in Santa Rosa a happy one.” Dunwoody put out a call for magazines, books, cards and board games; three days later, there were enough donations to fill two army trucks.

The community embraced “our soldiers” enthusiastically. Normally closed for winter, Santa Rosa’s open-air swimming pool (AKA “The Plunge” AKA “Municipal Baths” at 436 King st.) was made available with the water heated. The Ice Arena (next to the Grace Brothers brewery, at Second and Wilson) welcomed soldier skaters and all movie theaters charged them only children’s admission prices, as seen in the ad to the right.

Looking a little farther past the first week of war, on Dec. 15 the Santa Rosa Moose Lodge called for 1,000 cakes to be baked for the fairgrounds soldiers on Christmas. They ended up with over 1,500. “The sidewalk in front of the Moose hall for several hours looked like Santa Claus had raided a bake shop,” quipped the Press Democrat.

Then nine days past Pearl Harbor, a family on Lincoln street received the telegram no one wanted to read: Their son had been killed in the attack. Billy Montgomery was the first war casualty from Sonoma county.

At home in Santa Rosa a month before leaving for Hawaii and service on the USS California, his mother wanted to take a picture of her 20 year-old son in uniform. “…He told me ‘People know what I look like, Mom, so why should I put this face on paper?’ He was just an average boy who loved life,” she said in 1958.

2 thoughts on “CITY OF WAR AND ROSES”