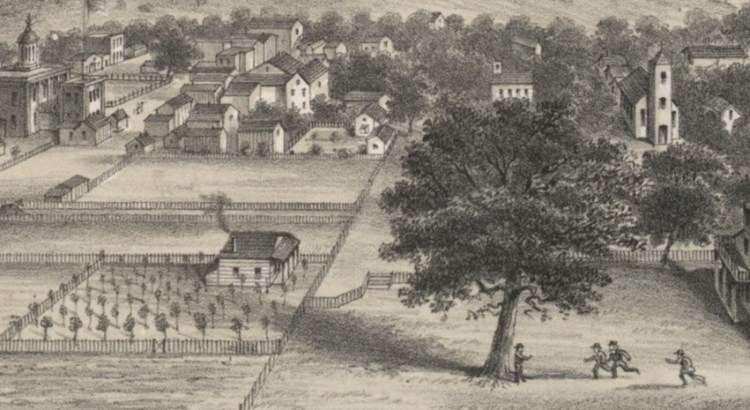 There were worst places to live in California than Santa Rosa in the 19th century – there’s always gotta be someplace worse – but if you were an African-American, this town was a really hard place to call home.

There are 24 African-Americans buried at Santa Rosa’s old graveyard, the Rural Cemetery (listed below). We don’t know much about most of them aside from vitals: Birth/death, coroner’s reason why they died, maybe their job. At least four had been slaves, possibly up to seven. Very few had an obituary in any newspaper; what little trace that remains will appear in the revised cemetery book coming out later this year with thumbnail profiles for almost every person there, which will instantly make it the most important work on local history ever published. About half of the African-Americans buried there are lost, meaning the locations of their graves are unknown. Any wooden or temporary markers are long gone.

But four of them have remarkable histories which are explored in the following three articles: John Richards, Edmund Potter and his sister Elizabeth, and Henry Davison deserve to be remembered and honored.

Their stories are intertwined with Santa Rosa as it existed in their day – which is to say, a shockingly racist small town. While it’s always been generally well known that this village was a cheerleader for the Confederacy around the Civil War, little has been detailed about the way black members of the community were treated here in the decades after, often facing routine cruelty and sometimes violence. Yes, Santa Rosa discriminated against the Chinese and like many communities in the West formed an Anti-Chinese League in 1886, but that hostility simmered down. Not so the feelings toward African-Americans.

Other towns in California were sympathetic to the antebellum South, but try and find another place where anger at its defeat burned for decades like a fire which would never extinguish. Read the old Democrat newspaper and enter a world with upside-down racial grievances; everything would be okay if only African-Americans just went away (somewhere); there was sometimes inchoate rage that slaves had (somehow) instigated the Civil War. The Democrat liberally sprinkled its pages with the “n word” and other racial slurs before, during and after the war, often reprinting the most racist filth scraped from Southern newspapers. The hatefulness in that paper was unrelenting and often savage.

The publisher of the Democrat was Thomas Larkin Thompson, and he bears full responsibility for the shameful things that appeared (or did not appear) in his pages. In my opinion he was the most loathsome man in Santa Rosa’s history, and that’s really saying something.

Thomas L. Thompson does not bear the blame alone; he didn’t edit the newspaper after 1882, when he was elected California Secretary of State and moved to Sacramento. After that he was a one-term congressman and after that a diplomat. His name remained on the masthead (and was often the only name mentioned) as “manager,” although the editing and hands-on work was done by his brother Robert, veteran journalist John F. Linthicum and probably others. While there was a sharp drop in the frequency of actual racial slurs after Thomas L. surrendered the editor’s chair, the Democrat never lost an opportunity to applaud Jim Crow or mourn the Lost Cause; there was an 1889 item headlined, “Slavery’s Sunny Side” describing life on a Georgia plantation as “a colored people’s paradise…only kind treatment from Master and Mistress.” A postscript to this series shows the racism in the paper during the 1890s was still as bad as it was in the 1860s, and even followed the same patterns.

Why any African-Americans chose to live in 19th century Santa Rosa is a complete mystery – and as the summary to the right shows, few did. And having wallowed in the mud pit of the 19th century Democrat by reading it over many years, I still can’t say whether Thompson and the other editors were molding racist attitudes or were only reflecting the hatefulness already ingrained in this particular community. Our hometown race-haters were anything but passive; as shown in the profiles that follow, the cruelty and animus was dished out by the white citizens of Santa Rosa – women, men and children, the city government and city police.

The drawing of Santa Rosa at the top of this page and below was made in the mid 1870s, when Santa Rosa was about the whitest place in the whitest county in the whitest state. Santa Rosa would not exceed three dozen African-American residents for more than a half century after that. It was drawn, by the way, by Grafton Tyler Brown, the owner of a lithography printing house in San Francisco. Besides being a successful businessman and a gifted artist, he was black – which the Democrat never mentioned, even while praising his talent.

That was typical of what the Democrat newspaper did – it erased everything about African-Americans that did not fit racist stereotypes. And it wasn’t just outsiders who were given that treatment; black members of this community were rarely mentioned except when there were opportunities to make fun of them.

The historical record has suffered because of this racial censorship. To profile the three men in this series it was necessary to squeeze out details from papers elsewhere, particularly the weekly African-American newspapers published in San Francisco at that time: The Elevator and The Pacific Appeal.

Those weeklies revealed 19th century black Santa Rosa was far less provincial than one might have expected. African-Americans in Sonoma, Napa and Solano counties were plugged into a network of Bay Area civil rights activists which included storied men such as Underground Railroad conductors J. Madison Bell and William H. Yates. Also out here were the sons of prominent East Coast black abolitionists David Ruggles and James G. Barbadoes. (A h/t for explaining these connections to Lloyd Belton, who is researching black abolitionists for his PhD at University of Leeds.)

Bordered by Santa Rosa on the north and Stockton on the south, this extended 19th century African-American community organized clubs, societies and committees working on equality issues; we can trace activist travels in the black weeklies and resources such as the 1919 book, Negro Trail Blazers of California. As far as I can tell, there is no historical research into this important chapter of the American civil rights movement; should any historian be looking for an original dissertation topic, this is very fertile territory.

Civil rights organizers from Santa Rosa included John Richards and a man named Johnson, who was considered a particularly good orator.* As discussed in his following profile, Richards’ activism took him to San Francisco, San Jose and Sacramento. Much of that happened before the train arrived here, making this no easy undertaking for any of them, nor cheap; they started doing this back when stagecoach trips from San Jose to Sonoma county took at least a couple of days each way.

Coming up here regularly from the Bay Area was Jacob Overton, whose visits to Santa Rosa can be traced over 35 years. He spent much of his time, energy and money as a civil rights activist with his wife, Sarah, who became an important black speaker during the 1911 suffrage campaign. They traveled around the state and Nevada lobbying for African-American schools and joining seemingly every group backing state and national equality causes, forging bonds within black micro-communities such as Santa Rosa. Overton was also a minister and a highly popular restauranteur and caterer around San Jose. He is prominent in two of the profiles that follow.

All three men profiled here had obituaries in the Democrat, and each contained details which revealed the paper knew a good deal about the deceased and his interesting past. Yet none of the obits mention a word about any connections to the civil rights movement, either locally or prior to coming here – even in death that was a forbidden topic in Santa Rosa.

Read through the following profiles and discover the Democrat was guilty of far uglier things than printing rehashed articles tarnished with “n words.” It disappeared African-American townsfolk by not writing obituaries for most of them and avoided mention of any of their doings, not just those which would cast them in a favorable light. Weddings, deaths, births, arrivals and departures were largely ignored. By hiding the lives of our small town’s black neighbors, the paper scrubbed away their identity until all that was left for the rest of the community to see was color.

After 150 years (more or less) time is long overdue to remember who they were, what they did and say their names.

Mr. C. C. Kuchel, the well known lithographer of San Francisco, has just completed a lithographic view of the town of Santa Rosa, a copy of which we have received. The sketches were taken by Grafton T. Brown, Mr. Kuchel’s traveling artist, and the scenes are very correct. Mr. Brown, we understand, will visit Petaluma soon, for the purpose of taking some views in that vicinity. His presence in that city will afford an excellent opportunity to her citizens to get a correct view of Petaluma, as they could not procure the services of any one more competent to perform the work.

3 thoughts on “THE HIDDEN LIVES OF BLACK SANTA ROSA”