No tombstone in the Santa Rosa Rural Cemetery attracts more attention than the one for Davis Wright, “colored boy” – or so it seems, as every few months questions or comments pop up on social media when someone discovers it and expresses amazement. What’s the story behind it? There has to be a story.

We only know four things about Davis Wright. He was 12 when he died in 1865; he was “colored,” but born in California so he was never a slave; he was buried in the Wright family plot. It’s the latter connection which intrigues.

Davis was part of the household of Sampson Wright – a wealthy farmer and horse breeder – where in the 1860 census the 8 year-old boy was listed as a servant. In itself that’s not unusual; also in the census Davis’ 5 year-old brother was likewise enumerated as a servant, as was a toddler at another house in Santa Rosa and an Indian baby in Sebastopol. It simply meant a person of color who was living under a white man’s roof.

What made the Wright situation so unusual in 1860 was that he had six other black “servants” beside Davis.1 No other home near Santa Rosa had more than a couple – and in those situations, the second servant appeared to be the baby/mother of the other.

The other curious thing about the Wright black servants was that they all had the last name “Wright:” Esther (age 50), John (25, but actually 29), Mary (18), James (13), Henry (11), David [sic] (8) and Georg [sic] (5). Except for Davis and George, all of them were born in Missouri, where Sampson Wright had lived before coming to California. Missouri was a slave state and Wright was a slaveholder there, with five slaves counted in the 1850 census. 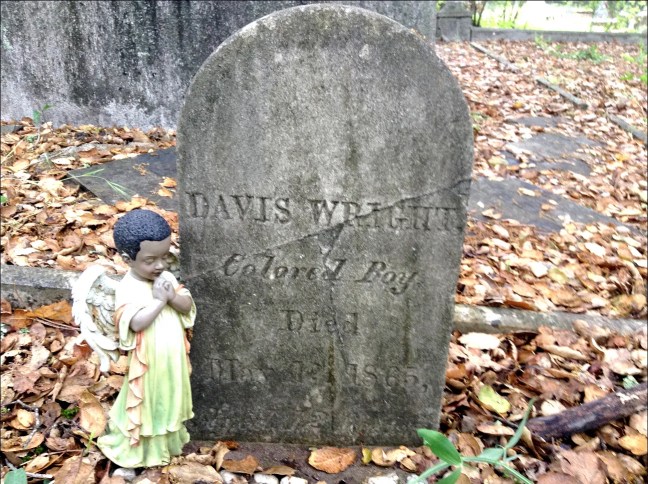 The slave schedules listed only gender and age of Sampson Wright’s Missouri slaves, and three had vitals which corresponded exactly to his California servants Esther, John and Henry. The other two youths on the California census, Mary and James, were almost certainly among those former slaves but the evidence isn’t quite as perfect.2

Wright seemingly had particular affection for John; when he died in 1867, Sampson’s will contained only two special bequests. One was a few acres to his five year-old grandson, Peter (who would die at the age of 9) and the other was “…to my Black man John Wright a homestead of 20 acres…so long as he continues to live on the same [after which it would be returned to the estate] …”3

At this point, Gentle Reader might be looking at the overall picture and wondering if Sampson Wright started a second family with Esther, bringing everybody along when he came here from Missouri in 1852 or 1853. This would go far to explain why a “colored” child is buried in the family plot – it’s because he was family.

Devil’s advocate – there might not be any family connections by blood between the white Wrights and the black Wrights; the five Missouri slaves could be entirely different people from the five California servants, and the matching age and gender was just a wild coincidence. Perhaps the Wrights had a compassionate concern for what would happen to their former slaves once they left Missouri and realized the blacks they owned would fare better if they stayed with them in the free state of California, albeit in a modified role as servants – although that doesn’t explain how it came to be that two more black children were born here bearing the Wright name.

Beyond their unusual number of black servants, what do we know about Sampson and Elizabeth Wright? Sadly, not much. They were both elderly; in 1860 he was 67 and she was 57 (they lied on the census and claimed she was four years younger). They had a 250 acre cattle and horse ranch where Coffey Park is today. The property and animals combined were worth about $750k in today’s dollars, putting them comfortably in Santa Rosa’s top 10 percentile. Their two children were grown and well-established in the area; her youngest child was born in 1827 (“my Black man John Wright” – the first of the black children – arrived four years later).

The Wrights were almost never mentioned in the Santa Rosa newspaper except for Sampson’s horsebreeding, which is quite unusual, considering their wealth and that his two sons with Elizabeth were prominent men. The paper ignored it when he remarried at age 74 (five weeks before his death!) and when he died Sampson was given only a seven-line obituary – which was generous considering how poorly the Democrat treated Elizabeth, who didn’t even merit a death notice. It’s almost as if the couple was blackballed by the community.

All of the different Wrights aside, there’s also the important historical context of when Davis Wright died in May, 1865 (exactly 155 years before the posting of this article). The Civil War had ended just a month before and those were white-hot emotional days in Confederacy-loving Santa Rosa. And there was Davis, the first African-American being laid to rest in Santa Rosa’s Rural Cemetery, which had been established only about a decade before.

Put all of these details together and I see two possible interpretations of what Davis Wright’s tombstone could mean.

Perhaps Sampson was distancing himself from the child being buried there – apologizing, if you will: “This boy shared our last name and lies in our family plot, but he wasn’t really part of the Wright family.” If that was his intent, the grave could have had a simple wooden marker or even no marker at all. But that carved granite tombstone wasn’t cheap, and Sampson certainly did not have to advertise Davis was a “colored boy.”

Instead, I believe the tombstone actually shows him taking a noble stand. Elizabeth had just died and been buried there four months earlier, seemingly having endured a dozen years of being ostracized by the town’s hoi polloi – the same people who now would be griping their nice new cemetery was being defiled by having an African-American grave. What I imagine “colored boy” really means was Sampson Wright defiantly saying to Santa Rosa: “This is my beloved son. Deal with it.”

9 thoughts on “THE GRAVE OF THE COLORED BOY”