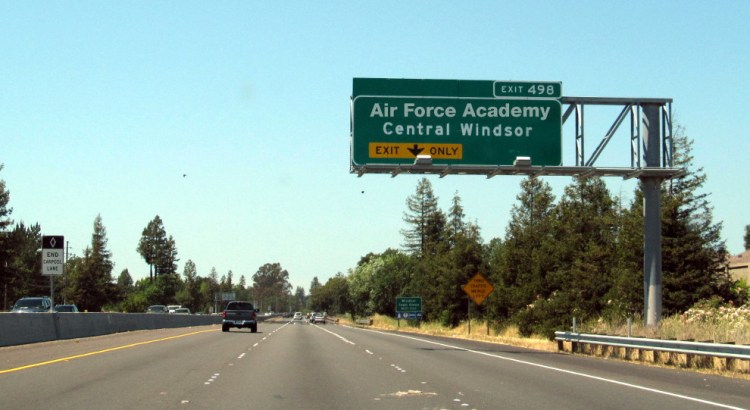 Forget Charles Schulz and Peanuts; forget Luther Burbank and his garden. Forget tourism, with its spas and wine tasting (and for that matter, forget boutique wineries). Santa Rosa and the surrounding area are known for one thing alone – it’s the home of the Air Force Academy.

Oh, you say, that’s in Colorado Springs – and notice how quickly the name of that city comes to mind – but in 1950 the Academy didn’t yet exist and its future location was very much up in the air (sorry), with Santa Rosa among the top contenders. The Chamber of Commerce waged a year-long campaign to bring it here, even though it quickly turned neighbor against neighbor and pitted the city against the county Farm Bureau.

When the new year of 1950 began, the whereabouts of a future Air Force Academy was a much discussed topic nationwide. There were already 150 communities in the running, in part because the search criteria were so broad. Col. Freeman Tandy, chairman of the task force screening possible sites in California, said basic requirements were that it be within fifty miles of a major city, be close to all means of transportation, have utilities available and sport natural beauty. He explained they wanted a place suitable for a university more than an airfield with lots of noisy flight operations.

And there was this: Colonel Tandy said the government expected to spend up to $300M to acquire land and build the campus – the equivalent of spending $3.2 BILLION today. When the Santa Rosa Chamber of Commerce invited the selection board to come here and look around we can only hope there was no obvious drool on the letter.

A survey team from the Army Corps of Engineers was slated to visit in mid-January but there was one teensy problem: We hadn’t settled on a location to show them.

The property was directly across from modern-day SSU on the east side of Petaluma Hill Road. The Air Force was looking for 9,000 acres and the four square miles would be less than a third of that, so maybe they were counting a large chunk of land on the west side of the road – there was no Rohnert Park at the time, remember. It was pointed out that buildings could be on the scenic slope of Sonoma Mountain and part of the site was “a natural football bowl.” Sell the sizzle, not the steak.

When the two guys arrived for the tour, a throng of local poobahs swarmed over them like a pack of dumpster raccoons. Reps from the city and/or Chamber for Santa Rosa, Petaluma, Cotati, Forestville and Sebastopol trailed the caravan driving up and down Petaluma Hill Road and out to Crane Canyon Road – although they couldn’t see much because of heavy rain. Then it was off to Santa Rosa and its lush Topaz Room for lunch and fine speeches about how everyone thought it would be the bestest choice the Air Force could ever make. Afterwards they all piled back into cars and went off to see the “Sonoma County Airport tract.”

Normally you’d expect it would be the last anyone heard of a project like this; competition was fierce from more prominent cities in California and other states in the West. Then suddenly the North Bay became a top contender because General “Hap” Arnold happened to die right then.

Hap Arnold was the indisputable father of the U.S. Air Force. Besides wrenching it away from the Army as its own military branch (no small task, that), he won highest praise for leadership during WWII, winning the air war against both Germany and Japan. Hap retired to his 35-acre “El Rancho Feliz” on the eastern side of Sonoma Mountain and wrote a 1948 article for National Geographic, “My Life in the Valley of the Moon” which spoke of his contentment there. The Santa Rosa-Petaluma site might have been easily extended to encompass his little homestead. He also kept an office at Hamilton Field.

Our congressman lobbied the Air Force Secretary to bring here the “Arnold Air Academy” or somesuch, and letter writers to the Press Democrat urged we take the initiative, beginning with a “General Arnold Day” countywide holiday and a military parade, maybe. We could also start naming things after him – which we did a few months later when the Board of Supervisors changed Glen Ellen Road to Arnold Drive. The Napa Chamber of Commerce, which had its own bid for the Academy, insisted they, too, wanted a nod to “Arnold” should they be given the Golden Ticket (which would have created absolutely no hard feelings over here, I’m sure).

But amid the national mourning for Hap Arnold and locals Burbank-inizing him into our new Favorite Son, the county quietly took the Santa Rosa-Petaluma site out of the running, despite it being the showcase of the presentation to the inspection team – as well as being the only landmark connection to the famed general. From the Jan. 21 Press Democrat:

There are several shaky details in that clip, although some may be due to lousy journalism. Was the Santa Rosa Chamber of Commerce (not the city) really directing the Supervisors to make historic, sweeping changes in county planning? Col. Tandy was not part of the survey party that was here the previous week, so when did he evaluate the sites? Did he officially issue this opinion or was it an offhand remark made to someone? Previously, his only comment was that he didn’t think there was an adequate water supply in Sonoma County, which led the PD to boast there would be more than enough once Lake Mendocino was created (as of this writing in 2021, drought has reduced the lake to little more than a mud puddle).

The proposed site encompassed 14,000 acres, of which 5k would be actively used as the Air Force campus. Roughly all of the Russian River between Windsor and Hacienda Bridge would now belong to the government, with a dam somewhere to create a lake (hey, we could name it Arnold Beach!) for boating and freshwater supply. The site also included the area which is now the Sonoma County Airport, requiring us to develop a different airfield.*

But the Academy’s greatest impact on the county wouldn’t be its whopping size – it would be the sudden pop in population. The Air Force planned to begin with 2,000 cadets and ramp up to 5,000. Together with the staff required to support operations it would add 20,000 people to Sonoma County. That was more than lived in Santa Rosa, which then was under eighteen thousand.

It’s no wonder why the Santa Rosa Chamber of Commerce was racing after this project; it was said the Air Force expected a town of about 8,000 would be built nearby. Whether that would be North Santa Rosa or West Windsor didn’t really matter – those newbies would still have few shopping options except for the City of Roses’ downtown stores.

The big loser in this switcheroo of preferred sites was Petaluma, of course, and it’s a wonder it didn’t destroy what comity remained between Santa Rosa and the egg city. The Argus-Courier assured the Petaluma Hill road site wasn’t fully out of the running and would still be submitted as an alternate. “At least we are not going to give up hope yet,” an editorial said. Yet the 62-page brochure presented to Washington D.C. on behalf of “Sonoma County in the Redwood Empire” had no mention of it, while including several pages just on school districts in and north of Santa Rosa.

Not surrendering graciously were many small farmers who would be required to sell their land. Nor did the Press Democrat soothe their irk by printing op/eds like this: “By far the greatest amount of land taken over by the Academy would be so-called ‘marginal land,’ much of which is now used as pasture or not used at all.”

Leading the opposition was Fulton hops farmer Lawrence (L. M.) Meredith, spokesman for “The Committee on Public Relations” and frequent letter writer to the PD. He insisted this would take out of production “thousands of acres of the most highly cultivated land in Sonoma county river bottom land that is equal to any in the state,” with an annual revenue of about $22 million today. A pro-Academy rancher with a spread in the target area called BS; farmers were no longer getting the big bucks seen “during the lush war years period” and prune growers worried prices were so low their fruit was barely worth the picking.

About a month after the site was announced, Meredith and other protesters had back-to-back meetings with the Santa Rosa Chamber and the Farm Bureau. The Chamber president said they wouldn’t comment “until ‘all the facts’ are learned about the exact site proposed for the academy,” according to the PD. (Hey, bub, YOU were the one who drew the map!) The next night the protesters met with the Hall Farm Center, which was one of the Farm Bureau’s regional branches. Members voted against the site. (RIGHT: The Air Force Academy in Colorado Springs, CO. Imagine this on the west side of Highway 101 near Windsor)

Tensions continued to rise between the Chamber and the farmers. On March 2nd there was a big meeting at the Windsor Grange where around 200 farmers attended, supposedly representing 10X more people living within the site borders. The Santa Rosa Chamber of Commerce snubbed an invitation to attend. Asked why, Al Lewis, secretary-manager of the Chamber gave an answer certain to further antagonize protesters: “If anyone requests you to talk at a meeting, they generally write you a letter asking you to attend. This notice invited me to listen to an explanation of the proposed Air Force academy. I already know about the academy.”

Lewis continued his perfectly tone-deaf reply: “At the present time the Santa Rosa Chamber of Commerce is not plugging the Santa Rosa area at all as a location for the academy. We are merely working with other state chambers in getting the academy located somewhere in California.” Um, yeah.

At another Grange meeting a few months later the Chamber president attended “on a mission of good will” (per the PD) and listened to people voice their opposition to the project. During the meeting a farmer proposed a boycott of Santa Rosa businesses, which was met with applause. A pro-academy resident described the toxic mood at that meeting:

By that time there had been 580 sites proposed for the academy and when the first cut was announced before Thanksgiving, Santa Rosa was among 29 semi-finalists. We were now so close to the jackpot that the Press Democrat editorial writer lapsed into a somnambulatory abstraction and began spewing numbers: “A $3,344,000 annual payroll, a livelihood for 4,000 persons, a $4,300,000 retail market, opportunities for 75 retail stores, sales and service for 1,300 automobiles…”

The site selection commission visited here and took a 90 minute tour of the site, followed by a Chamber luncheon at the Topaz Room where Hap Arnold’s widow was a featured guest. The day before the PD had dedicated a large portion of the Sunday edition to extolling the county’s virtues, including an editorial with a lengthy quote from her late husband’s National Geographic article. The op/ed closed with a reminder Hap lived only “a few miles from the Air Academy site.”

But come March 1951, the list of potential sites was winnowed to seven – and Santa Rosa was no longer in the running. Sad! (Or not.)

It came out years later the commission appeared more interested in the Petaluma Hill Road site than the one close to Santa Rosa. From the June 3, 1954 UP wire: “The group inspected the Windsor site by auto and flew over the southeastern site twice. That location included the Sonoma Valley estate of the late Gen. H. H. Arnold, war-time chief of the Air Force.”

In hindsight, there are a few different ways to look at the Misadventure of the Air Force Academy: