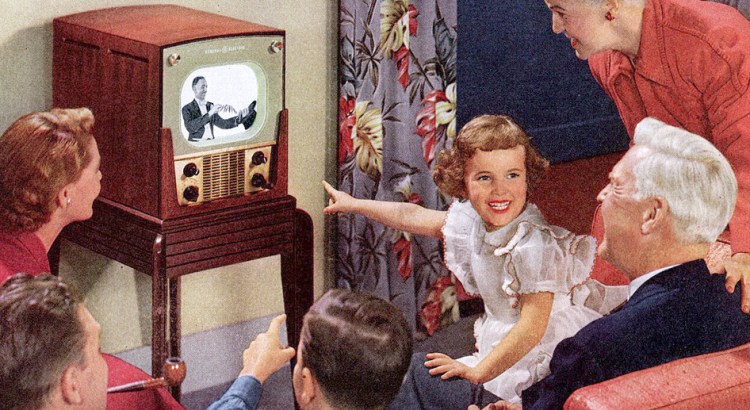 Santa Rosa waited twenty years for it to happen. Twenty years! Yet when the big day arrived almost no one was able to enjoy it.

The date was December 22, 1948; the event was the first TV broadcast in the Bay Area (except for test patterns and other experiments). In Santa Rosa, the lucky folks who had a television got to watch an episode of Howdy Doody, a travelogue about Santa Clara county and a hockey match between the San Francisco Shamrocks and Oakland.

During the game Santa Rosa received a shout-out from the station for getting calls from local viewers. The Press Democrat remarked the KPIX broadcast came in “surprisingly well” while the Argus-Courier noted reception was “first class…[with] a number of excellent clearcut, contrasty pictures on the screen. Such deficiencies as loss of the sound component and flickering were still noticeable.” So aside from no audio and a lousy picture, everything went just swell. 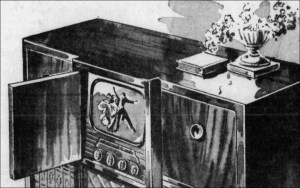 Few were watching that night because there was no reason to have a TV unless something was being broadcast – and it was difficult to justify the enormous cost of building a station without a large audience to watch commercials. Chicken, egg, repeat. Television sets were also extremely expensive; the Admiral console shown at right with its massive 10″ screen cost the modern (2021) equivalent of over $6,000.

Over the prior two decades, however, Santa Rosa was told that television would transform us. Speculating about this brave new world was a frequent topic at Rotary lunches and other club meetings; the Press Democrat used barrels of ink printing editorials and columns on What It Would All Mean – despite, of course, probably no one around here having actually seen a television.

PD editor Ernest Finley seemed determine to wish it into existence. “Television radio” (as many called it in the early 1930s) “will come into common household use, just as the telephone and radio are today. And it will not be long,” he wrote in 1931. Later that year he speculated it was “about three years away” and said it was still “at least three years away” in 1938 and “still far away” the following year.

Finley, who founded KSRO in 1937, had muddled ideas TV would operate like radio with specialized bands, such as used by police: “Crime detection would be greatly facilitated if officers could send a row of suspects across a television screen…’Is the man you are looking for among these suspects?'”

Or maybe it would be more like today’s live webcams, where we could dial in the frequency of places around the world: “…we can view St. Peter’s, Rome, visit Niagara Falls, see the pyramids of Egypt by moonlight without subjecting ourselves to the annoyance and expense of making a long journey…We may be doing a lot of things differently a hundred years from now than we do them today.” Well, he got that much right.

But pundits in the 1930s said it was certain: Television broadcasts would destroy the motion picture industry, wipe out newspapers and empty the sports stadiums. Or maybe television broadcasts would be completely controlled by Hollywood, daily papers would thrive and ballgames would attract far more viewers than could possibly fit in a stadium. It was definitely going to be the best and/or worst of times. 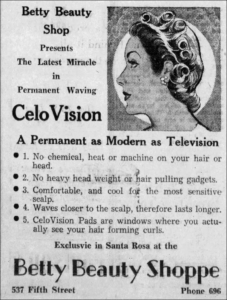 (RIGHT: 1937 ad for “Celovision,” a hair treatment which used cellophane. The name became simplified as the “television permanent wave” when it was still available at the Uptown Beauty Salon on Exchange Avenue in 1948)

Oddly, “television” became a buzzword slapped on things which had nothing to do with, you know, television. There was the women’s hair wave shown at right and also in 1937 the White House toy dept. sold the $1.98 battery-operated “Irwin Television Rifle” which flashed a sharp beam of light when the trigger was pulled. And then there was chiropractor W. T. Abell and his “television radionic instrument” hokum, discussed below.

Come the late 1930s, all the talk of TV being right around the corner was badly hurting the sale of radios, particularly after it became clear the FCC was about to approve TV stations on the East Coast (commercial broadcasting began in New York City and Philadelphia in September 1941).

To their discredit, manufacturers suckered in consumers by promising their radios were “television ready,” “built to receive television sound” or had a “television audio key.” Pedersen’s sold a radio/phono console advertising “Magnavox television can be added to your Magnavox at any time.”

Most (all?) of these c. 1940 radios were probably just providing an input jack so the television’s audio could play through the radio speaker – assuming the TV came with a matching output jack, of course. But by the time KPIX and other stations began broadcasting here, terms like “television attachment” nearly disappeared from newspapers, except in For Sale ads of people wanting to unload their ten year old radios for which they paid a premium price.

Sonoma county was certainly TV-curious; the Ward’s ad shown here was in the Press Democrat August 5, 1948 and invited customers to see an actual television set, although nothing would be onscreen since nothing was being aired yet. Until that first KPIX broadcast in December, the PD continued to write about television as if it were some exotic curiosity, even though stations on the East Coast had been broadcasting for seven years. As a result, the paper still sometimes spouted hyperbolic nonsense. 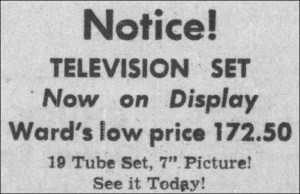 After a 1946 news item appeared about a BBC experiment to see if subjects could be hypnotized remotely, a PD editorial called for legislation against “hypnotic commercials,” writing “it will no doubt be necessary to set up a new set of regulations to govern practices in presentation of television programs when that science reaches out generally into the homes of America.” PD sports columnist Bill Claus in 1948 called for laws against watching TV while driving – although such a rig would’ve filled up the passenger side; the smallest set available weighed 26 pounds, was the size of today’s microwave ovens and would have required its own auto battery plus DC-AC inverter.

After New Year’s 1949 the paper began writing about television more realistically, including a little item on the Brandeburg family of Santa Rosa visiting relatives in Los Angeles where they watched the Rose Bowl game and Rose Parade on TV. A front page box titled “Television Tonight” announced where the public could stop by and see it for themselves: Berger’s Cigar Store, the Tack Room on Redwood Highway South, The Office on Third street.

Even after KGO began broadcasting in May, only thin gruel was offered for viewing. The broadcast day was typically just from 6:45PM until signoff around 10 o’clock, although there would sometimes be a Saturday afternoon ballgame.

In the early part of 1949 there would be a kid’s show at 7, usually film of an episode of Howdy Doody or Kukla, Fran & Ollie. There were many open slots in the schedule “to be announced” or filled by newsreels or promo material (“Washington State: Appleland”). Some shows were seemingly about as interesting as watching paint dry (Clem’s Barbershop, Tele-Tales). There was 10-15 minutes of news on KPIX and a weekly five minute program called Wanted Persons (oh, the late Ernest Finley would have been so tickled).

But later in the year the programming on KPIX, KGO, and newcomer KRON was much improved and the same as seen on the East Coast, albeit a week or so later: Milton Berle, The Goldbergs, Ed Wynn, Arthur Godfrey, Lone Ranger, Studio One. It was a mix of filmed studio productions and poor quality kinescopes of live shows, as there was no coast-to-coast broadcast until 1952 (although a speech by President Truman aired a year before).

By the end of the year likely the entire town had seen sports or a program at someone’s home “television party,” in a tavern or club or in a store window. The most talked about demonstration happened in November, when Armand Saare, who had a radio and TV dealership, rented a hall which was large enough to seat 300 people to watch the Big Game between Cal and Stanford. At either end of the NSGW lodge on Mendocino Ave. (this lovely building from 1909 is still there, but often overlooked) he set up two televisions with 19½ inch screens, which would have seemed huge at the time.

Every family in Santa Rosa didn’t rush to buy televisions in 1949, of course, but enough did to spawn a new little industry: TV installation and repair. Newspaper ads from the dealerships increasingly emphasized their service departments, particularly skill in antenna installation. Anyone paying (the modern equivalent of) thousands of dollars for a set was not going to scrimp on adding an antenna, which was no simple thing. Besides properly mounting it to the house or mast and aligning it for best reception, Santa Rosa then required payment of a $9 building permit per antenna, plus inspection.

Looking backward, it seems we didn’t notice that a kind of earthquake was rippling through the Bay Area in 1949. A new technology had arrived which began disrupting the pattern of our daily lives; it demanded more of our attention than radio ever had and we wasted time watching it even when there was nothing of particular interest to see. TV crept into our lives because we thought of it as just a simple entertainment upgrade, “radio with pictures.”

Everyone of a certain age can recall the year their family got that first television. I certainly do, as well as some of my favorite shows from the time (what I can’t remember is how many countless hours were spent watching dreck). Having a TV gave kids important things to talk about the next day at school – funny things heard on a cartoon show, new toy commercials, who could do the best Klem Kadiddlehopper imitation and whether TV wrestling was phony or not. One thought on “WILL WE EVER GET TO SEE TV?”