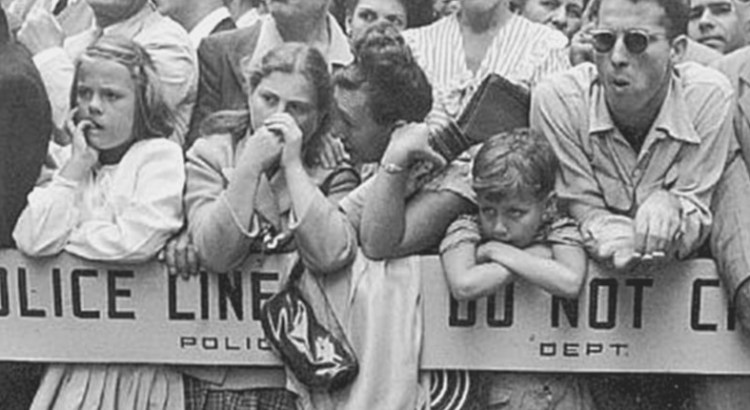 The wait was unbearable. Few probably slept although it was nice August weather, with cool fog after dark. Had it happened overnight? Tune in KSRO at 6:15 for the first morning newscast. Grab the Press Democrat on the doorstep and study it. Every word of news in it. You have to know everything about the situation. TODAY is the day. Okay, it will happen tomorrow, for sure. No need to set the clock. You’ll be awake long before 6:15. It will be THE day.

For five days in August, 1945, Santa Rosa was as wound up as a 6 year-old eating spoonfuls of sugar on Christmas Eve.

Friday, August 10, was the day after the U.S. dropped the second atomic bomb on Japan, destroying much of the city of Nagasaki. Truman warned Japanese civilians to flee industrial cities to save their lives from further atomic destruction. The Soviets declared war on Japan, and the Empire then announced it would broadcast “news of vital importance to everyone” on Sunday night. Everyone presumed it would announce a surrender, marking the end of WWII.

The Santa Rosa Chamber of Commerce laid out the rules: When the fire sirens go off, all bars were to close and to stay closed for the rest of the day. Ditto for retail stores: “…stores will close immediately if official end-of-the-war announcement is received during business hours. In this event – receipt of word while stores are open – they will close not only for the balance of the day, but also for the entire following day provided the following day is a business day. If the word is received in the early morning, before the usual time of opening, they will remain closed all day…” There will be a victory parade, although “…There will be no Sunday parade, however, in event the word is received on that day, or late Saturday…” They apparently spent the entire day in meetings to make sure we knew how to spontaneously have fun properly.

Santa Rosa was having a bad case of the “peace jitters,” as the Press Democrat called it. There was little news on Saturday – Washington was keeping negotiations hush-hush, but it was reported Japan wanted conditional terms of surrender. Not much on Sunday, either. The PD ran a letter to the editor complaining about the new parking meters.

Everyone was waiting for that Sunday night message from Japan. And at the expected time, radio announcers interrupted the regular programming to announce “Japan accepts surrender terms of the Allies.” The PD reported what happened next here in town:

Alas, it was a hoax – a prankster had hacked into the United Press news wire. About 15 minutes later, a correction was sent. “All rejoiced, only to have their thanksgiving shattered within a few minutes by word that the announcement was not true,” commented the PD. “False news that the war was over hit Santa Rosa like a shock.”

Although “Some Santa Rosans dashed for the nearest liquor stores to stock up against the 24-hour drought promised by state officials when the war really ends,” the false alarm had little impact here because the sirens did not wail. The PD – which was keeping the long-distance wire service phone lines open full time (“at an added expense to the newspaper,” a thrifty editor complained) – was waiting for confirmation of the surrender before asking the Fire Department to cut ’em loose.

Those who tuned in at 6:15 the next morning must have been emotionally fried. Now it seemed as if the war might not end soon, after all; Japan had torpedoed a U.S. warship at Okinawa and bombing of Tokyo had resumed. In Santa Rosa, everyone trudged on, pretending as if it were just another war day:

The staff of the Press Democrat had now been on high alert for more than 72 hours, ready to produce an extra edition when the news came. ” Newsmen on the night shift were routed from beds as early as 5AM to return to the office and await the final word that hostilities had ended. Many had no sleep at all, others only two and three hours.”

Then at 3:10 in the afternoon on Tuesday, Aug. 14, 1945, the official announcement was made: Japan had surrendered. Within 10 minutes – ten minutes – San Francisco’s Market Street was filled with people as far as the eye could see from Union Square. The Press Democrat surely exhausted its lead type supply of exclamation marks for its extra:

Santa Rosa went mad – deliriously mad – along with the rest of the world!

Minutes before radio broadcasters announced that the Japanese answer to our ultimatum had reached Washington, Santa Rosans had struck a low ebb their hopes for early acceptance of the Allied peace terms had been dashed and they were prone to believe that the Nips had given us another standup!

And then came the electrifying flash that the Swiss delegation had received the all-important note from Japan and that in a matter of just 11 minutes President Truman would meet in conference with the news and radio reporters in the White House.

That was enough for Santa Rosa!

Before the historic statement of the President of the United States, declaring the war ended had hit the street, semihysterical crowds were forming at every street intersection. In a matter of minutes Santa Rosa’s business houses had closed their doors and employees were pouring into the streets – some shouting – some laughing and some in tears.

That was the start of the most hilarious, uproarious and most demonstrative celebration ever seen in the history of Santa Rosa. Men and women wept, shouted for joy and slapped perfect strangers on the back, kissed them or clasped their hands.

The party went on for the next two days.

NEXT: THE PARTY OF THE CENTURY 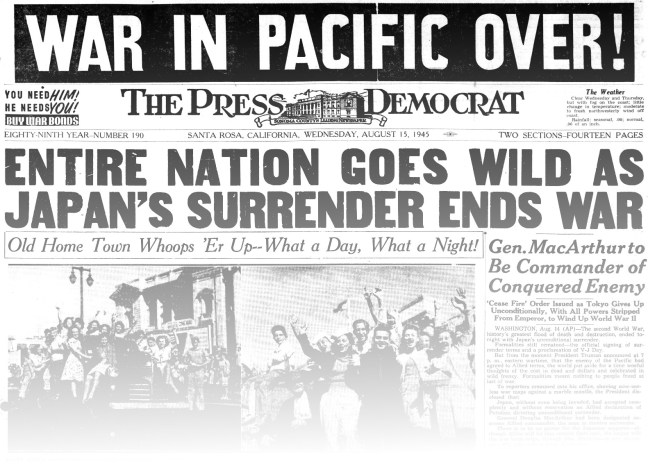