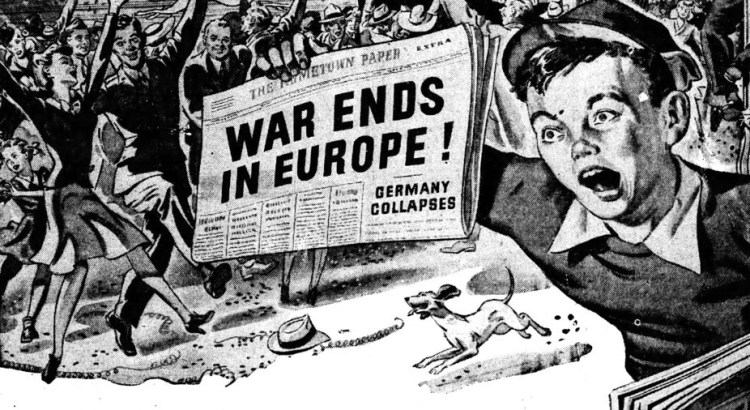 The V-E Day celebrations in Sonoma County didn’t have much bang to them, but that’s okay – we were saving our juices for the wild hell-raising that would come three months later when Japan surrendered.

For a week before the official V-E Day on May 8, 1945, two stories dominated the news: The United Nations Conference on International Organization AKA “World Peace Conference,” which had just started in San Francisco. (Fun fact: In Nov. 1946, the 1,640 acre Sobre Vista estate near Glen Ellen was among the sites considered as a possible location for building the UN. And you think traffic on Highway 12 is sometimes bad now…)

The other big news at the top of the front pages concerned the fall of the Nazis and when V-E Day would be officially declared. Joe Stalin had proclaimed the war over on May Day. Eisenhower had said on May 4 that Germans were “thoroughly whipped.” So why the wait? In newsrooms across the country, there was much squirming in editorial chairs. “Don’t blame your newspaper and its press services for not telling you in this edition that ‘It’s all over in Europe,'” griped the Press Democrat. “Evidently there are good and valid reasons why the responsible military leaders of the Allies, and their governments who depend upon their judgments do not give out that final, fateful symbol ‘V-E DAY.'”

Then early on Monday, May 7, the wire services broke the news that the war in Europe would be declared over at 9AM Eastern War Time the next day, as Truman, Churchill and Stalin made simultaneous radio announcements.

The PD did not publish a Monday edition at the time, but within an hour the staff rushed back to work and created an extra edition. Images of the May 7 extra don’t exist online, but the May 8 front page included a photo of a woman praying in front of a copy, with the entire above the fold screaming: “VICTORY!”

A possible public rally at the courthouse had been discussed the week before, but the Chamber of Commerce followed President Truman’s lead in calling for a day of thanksgiving rather than celebration. There was no partying in the streets, although barkeeps had agreed to shut their doors if the scene “got out of hand.” Instead, the PD reported “Word of Germany’s complete collapse and end of the war in Europe was greeted here yesterday with calmness.”

On the Tuesday morning of V-E Day there were church services and school assembly programs. Bars delayed their early morning openings by a couple of hours. Church bells rang. That was it. Everyone go back to what you were doing.

There’s an unexpected parallel between those events 75 years ago and life in virus lockdown today (2020) – everyone wanted to know when life would get back to normal.

When will food and gasoline rationing end? When can I buy a set of tires? A refrigerator? A new dress or suit? And somewhat peculiar to Santa Rosa, when can we start horse racing again? (“This is one of the ‘horsiest’ communities in all of California,” a Press Democrat editorial gushed, a couple of weeks later.) While restarting most of the domestic economy was still several months away, we were allowed to again bet on the ponies starting with the May 19-20 horse show at the fairgrounds.

The one local business that received an immediate boost from the war’s end was the Press Democrat, which saw its Tuesday edition expand from 14 to 24 pages. The additional space was aimed at making the edition collectable, filled with wire service overviews of the war in Europe along with many, many large display ads from local businesses (see sample below). Delaying the V-E announcement for several days gave the PD’s sales department plenty of time to peddle commercial art to downtown merchants. Sorry, the drawing of a cheery but slightly psychotic-looking G.I. is taken – wouldn’t you like this cartoon of Hitler in a noose wearing cowboy boots with spurs?

Our obl. Believe it or Not! concerns Ray Olsen, a popular public speaker at service club meetings. The PD always identified him as a “newspaperman” but he was a freelance advertising salesman who worked out of his home at 1203 College Ave and was also an avid shortwave listener. Through the radio he heard first-hand reports from overseas, which probably made him one of the best informed people in Sonoma County.

Starting in 1942, Ray’s most popular topic was his forecast of what would happen in the war. The PD variously said he made 19 or 25 predictions and got all but three of them right. He supposedly hit several on nearly the exact date, including the attack on Stalingrad and the American invasions of the Philippines and of North Africa. Although he later said V-E Day would be around April 25, 1945, he also had predicted it would be over November 1, 1944. His worst miss was his keystone prediction, which was that V-J Day would be around Sept. 25, 1945, where he was off by over five weeks. Still, he had a remarkable number of precise dates. 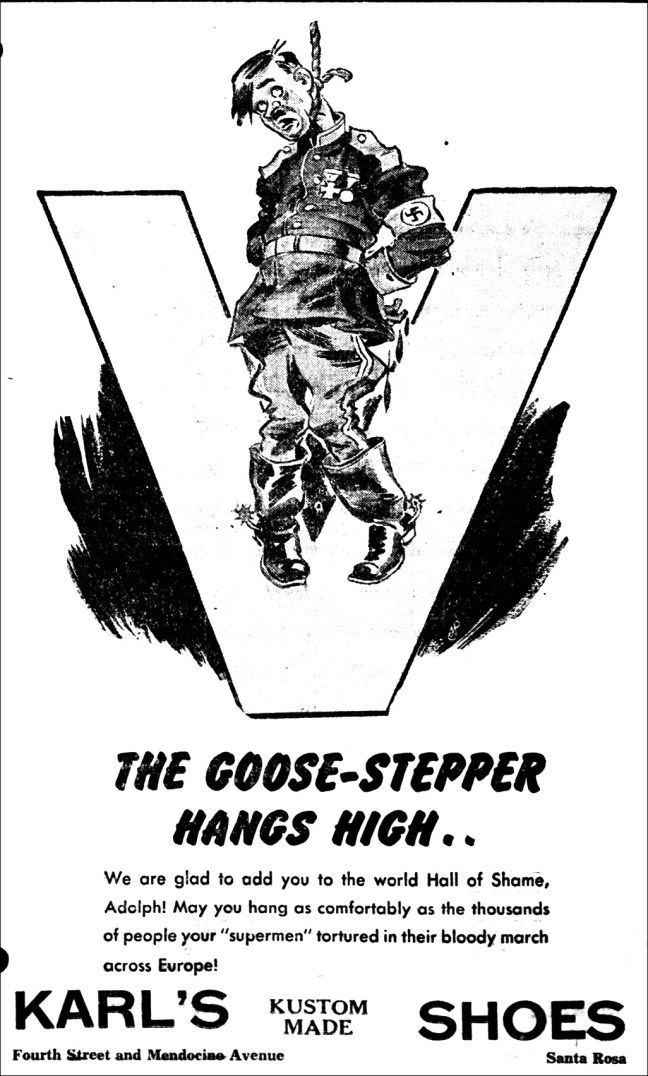