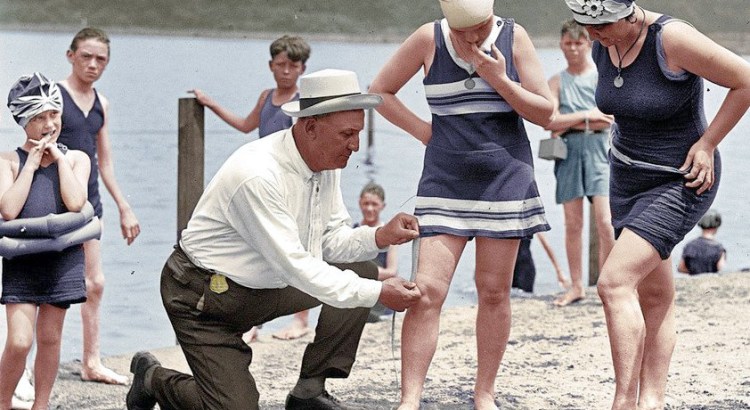 Imagine an America which seems to become increasingly divided with every passing day. One side is mainly rural and feels their values are under attack. They are warned by religious and political figures that evildoers could be plotting to sneak into their neighborhood to commit terrible crimes, these fears also being fanned by popular media repeating stories which are lies and exaggerations. This group disdains city folk as being morally weak and believe urbanites must be forced – by new laws, if necessary – to behave properly. They think sex outside of marriage is dangerous and children should be taught to be afraid of it. Meanwhile, the Republican party is being torn apart by the loud upstarts who now dominate the party, much to the dismay of the old guard.

This is the story about the swirling conflicts in the years leading up to Prohibition – a kind of cultural civil war that started in 1914, so it’s probably fair to say that was the year when the 1920s really began.

The divide was not red-state versus blue-state, Bugtussle Miss. vs. Boston Mass. The nation was still mostly rural/semi-rural and small towns like Santa Rosa were almost evenly split between those who were certain the country was headed on the wrong track or not.

On one side was a loose alliance of crusaders who sought the betterment of society (under their terms) along with a crackdown on vice (as they defined it). Many churches, conservative social groups and temperance organizations believed America was facing a morality crisis – a view also shared by the women’s clubs which became a formidable political bloc in California after suffrage passed in 1911. Those who scoffed at those notions rarely spoke up lest they be accused of being against decency, law and order, patriotism or suspected as evildoers themselves.

Today the best known outcome of this cultural war was Prohibition and the ensuing chaos of bootlegging. But the ban on alcohol was just the centerpiece of a suite of repressive laws the crusaders convinced legislatures to impose upon California and other states during those years. If the 1930s are known as the years of the Great Depression, then the 1920s should be considered the Great Repression.

More than anywhere else in California, Sonoma county was in the middle of all this turmoil and not just because of our ancestor’s skills (or lack thereof) at making jackass brandy or bug wine – although there are plenty of good stories to tell about that later. It was a no-holds-barred demand for sober purity but it was also, as described here in previous articles, schemes to force the crusader’s sexual mores upon others.

Before 1919, the Sonoma State Home performed sterilization operations rarely, and only on patients deemed to have “hereditary insanity or incurable chronic mania or dementia.” But a new superintendent was a firm believer in eugenics and by the mid 1920s the surgery was routinely performed (forcibly) upon women who were considered “sexually delinquent,” with notes in their records that they were “passionate,” “immoral,” “promiscuous,” or similar.

And then there was the so-called “American Plan,” which started when the U.S. entered World War I and continued through most of the 1920s. That was a morals crusade under the guise of patriotism – in this case, arresting women accused of prostitution and holding them under “quarantine” without due process. The state bought the Buena Vista mansion near Sonoma and in 1922 made it the Delinquent Women’s Home, where women were held until they were rehabilitated, although what that meant was ill-defined. The Home was enthusiastically backed by women’s clubs and managed by a woman who had no background in penology or social work, but had organized efforts during WWI to compile a government list of every immigrant in the Bay Area.

This posting is the introduction and index to a series on the 1920s cultural wars, always with special attention to what happened in Sonoma county. This is an important topic because we’re still fighting over many related issues in our nation today – yet almost all of the discussion (currently) available online about this history is general and superficial: Flappers! The Monkey Trial! Speakeasies! Al Capone! Billy Sunday! Nothing about the Delinquent Women’s Home, for example, had appeared on the internet (or in print, for that matter) until the article here.

Call me a nitpicker if you want, but I happen to think it’s important to know we were unconstitutionally locking up women indefinitely without the right to a trial – and there were other abuses which were as bad or worse to explore. As Bette Davis famously (sort-of) said, fasten your seatbelts, it’s going to be a bumpy ride.

One thought on “SONOMA COUNTY IN THE 1920s CULTURE WARS”