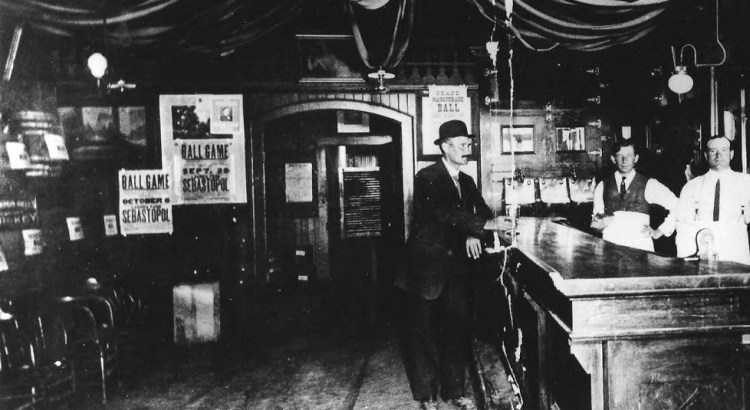 On January 17, 1920, Prohibition came to Sonoma county, as it did the rest of the land. While San Francisco marked the event by carousing and debauchery excessive even by Barbary Coast standards, the milestone passed with little notice up here. At midnight some bozo on Western avenue in Petaluma began shooting in the air and managed to knock out a PG&E powerline, likely pitching that side of town into darkness. With church bells clanging in celebration, residents suddenly without lights probably wondered if the end of the world had come – and many in wine-making, wine-loving Sonoma county were nervous that it had.

This article is part of a series on the 1920s culture wars, an era with numerous parallels to America today – particularly now that the nation is as divided as it was during the ignoble experiment which was Prohibition.

Much has been written about Prohibition; there’s a substantial number of books and internet resources on the topic although all seem to share the same flaw – events before it started are given short shrift and then it’s quickly on to Chicago gangsters, bathtub gin and the jazz age. You know: The fun stuff.

But take a step further back and a bigger picture emerges: Fear and loathing of alcohol was the moralistic glue holding together the various threads in America’s culture wars. Many preachers howled liquor must be scourged from the earth via a rigorous crackdown by law enforcement, which was a militant stance shared with the revived Ku Klux Klan – and while you were at their lecture, the boyz in the hoods also had a few other things to tell you about immigrants and white nationalism. The Women’s Christian Temperance Union didn’t just demonize demon rum; the group had a “purity lecturer” who addressed their 1913 convention in Santa Rosa, where she spoke about “social immorality” and “race betterment” (eugenics, in other words).

Here I’ve written dozens of articles about doings regarding alcohol both trivial and notable, such as the anti-suffrage propaganda that women would vote as a bloc to ban alcohol and that the first speakeasy in the county was the Electric Hotel in Forestville. Below the main stories are arranged to show how the prohibition movement gained steam in Sonoma county; the article following this one takes us from 1918 to the start of Prohibition and shows the early impact it had here. Spoiler alert: Prohibition generally turned out to be a good thing for Sonoma county.

As everyone probably knows, the “dry” prohibitionists saw themselves as crusaders fighting to save the nation; in Sonoma county and elsewhere there were Protestant activists eager to reform the bejesus out of drinkers. But until I began assembling this article I didn’t grasp how much of their clout leaned on intimidation; their bullying tactics were shockingly similar to the incivility found in today’s politics.

The Santa Rosa papers of the day seemed taken aback by church leaders mobilizing their flocks to pack City Council chambers (although that would hardly seem unusual now) and were unsettled that they would use children to disrupt public meetings with demonstrations. But it truly crossed a line when ministers did not shy from making threats – that they had better get their way or they would direct their congregation to inflict pain on their foes in the community with economic boycotts, blacklists and recall petitions. As noted below, when one of the most respected men in town simply remarked at a City Council meeting that history showed prohibition laws never succeed, he was attacked personally and shamed by a preacher.

There was no equivalent “wet” crowd in Sonoma county pushing back against them. Part of the reason was likely fear, but until 1918 most people here did not have to choose sides; there’s no evidence the public body was worked up about banning alcohol, either pro or con. When drinking holes were shut down it was because of specific vice complaints such as the place abetting prostitution or being a public nuisance. Roadhouses were closed after an uptick in drunken driving and because they were sometimes close enough to town to put constrains on development.

Before Prohibition Santa Rosa was always a saloon town – during the peak years of the early 1910s there were over forty places downtown where a fellow could belly up to the bar as early as 6am. Sure, some of the barroom traffic was driven by this being the county seat, but there also had to be lots of hometown support to have so many bartenders going to work even before roosters were up in winter.

Following the 1906 earthquake saloons were ordered closed for about a month and then allowed to reopen during daylight hours, soon after stretching the times to 6am – 8pm. When the saloon ordinance was considered again the following year, the City Council was surprised to find their meeting room mobbed with churchfolk demanding limited hours and Sunday closures. Two ministers there were spotted making a list of everyone attending (“to keep a record of the names of the people we saw” and was definitely not gonna be used as a blacklist, no sir) and at the followup Council meeting a few days later a preacher boomed their anti-saloon crusade “is a fight to the death!” He then insulted former Judge Barham by sneering that his son “…was now in an insane asylum, sent there by drink.” The Press Democrat commented, “As the last words were uttered, one could have heard a pin drop, so tense was the feeling.” The old man stood and walked out of the room in tears.

The dry crusaders lost that round in 1907, but three years later had better luck in Sebastopol, where they hectored the town into raising the annual liquor license from $200 to $1,000. Five saloons immediately shut their doors, not counting the three Chinese and Japanese places where liquor was served – those were closed automatically by another proviso in the new law which ruled no license should be granted to “Oriental residents.” (Liquor was already outlawed in Sonoma County for Native Americans; since 1908 you could be fined $500 and sent to jail for six months for selling alcohol to anyone with just one-fourth Indian blood.)

That was followed by mixed temperance success in 1912, starting with a portion of West County voting for prohibition (more of an issue about farm workers and real estate values) followed by a countywide ban on the sale of alcohol anywhere outside of major towns. That might seem like a moral victory for the drys because it closed 110 roadhouses, but as mentioned above there were public safety and economic reasons. Country hotels could still get a liquor license and a Grand Jury the next year found barkeeps trying to qualify by claiming tents, sheds and stables as hotel rooms. (The winner in this game of chutzpah was Guerneville’s main drinking spot, the Louvre, which insisted every guest room in town was part of their “hotel.”) Still, the prohibitionists chalked up the roadhouse ban as a big win for Team Sobriety.

That was also the first year women could vote in California, and about twenty towns had ballot items in 1912 to decide if their community would go dry. Cloverdale voted for leaders who promised to clean up the saloons – particularly gambling and serving liquor to minors – but rejected outright prohibition by an almost 2:1 majority. Overall, about half of the towns voting on alcohol went dry; in the Bay Area, only Los Gatos and Mountain View closed their saloons. That election showed women did not vote as an anti-alcohol bloc after all; “FEMALE OF SPECIES AS THIRSTY AS THE MALE,” quipped the Santa Rosa Republican in a headline.

Now the teetotalers were on a roll; in 1913 the Board of Supervisors amended the liquor ordinance so there could be no booze sold within fifty feet of place where dances were held. I’m confident their vote was not at all affected by what happened two weeks earlier, when a recall effort was launched against the Sonoma Valley supervisor charging he was “guilty of misconduct in office” for not demonstrating enough anti-roadhouse enthusiasm. The temperance side got locals to sign their recall petition by spreading lies that the supervisor was a drunk who had accepted “a sack of money” from Fetters Springs to obtain a liquor license.

And finally the league of morals and piety managed to get their Sunday closures. All major towns in the county tried it on a voluntary basis starting in 1916, with Santa Rosa being the only place where every saloon was shut down for the full day – saloons elsewhere in the county chose to close for the day, open late and close early, or keep their usual hours.

When Santa Rosa saloon owners made noises about Sunday reopening the PD reported several preachers met with the mayor. A “leading Santa Rosa minister” did not hesitate to threaten they would bring their well-funded state organization to town and make this place as dry as Death Valley. “If a move is started to reopen Sundays we will call an election and will bring all of the state forces of the Anti-Saloon League to this city and put up the strongest fight that has ever been waged in this city against the liquor interests. We have no doubt whatever as to the results of the election.” (Nice little town you got here. It would be a shame.) The saloons remained closed on Sundays and the next year the City Council passed an ordinance requiring it.

This brings us to the chaotic year of 1918. With the country now fully involved in the Great War, the federal government had given itself broad powers to ration and restrict goods, as well as creating new police powers to enforce those rules. Schools, military camps and any factories involved with war production were now surrounded by a five-mile radius “moral zone” where alcohol was banned. Propaganda from the Committee on Public Information not only made hate and fear of all things German into a patriotic duty, but also borrowed old tropes from the temperance movement to demonize everything to do with drinking.

With drys controlling the legislatures in most states as well as Congress, Prohibition was fast becoming America’s de facto policy even before the Eighteenth Amendment was ratified. Over the following two years it became like a runaway train; many tried to stop it (including President Woodrow Wilson) and failed to even slow it down. And during that time the nation became increasingly polarized as Americans found themselves being forced to choose a tribe as Prohibition became more of a certainty.

In the glum final days before Prohibition began, Sonoma county and other places in wine country pondered what kind of future awaited, with every option looking risky – and some certainly illegal. But then on Christmas Eve 1919, the Press Democrat published a remarkable letter from Charles E. Bundschu, which showed there was indeed a path forward.

NEXT: WINTER IS COMING: THE YEAR BEFORE PROHIBITION