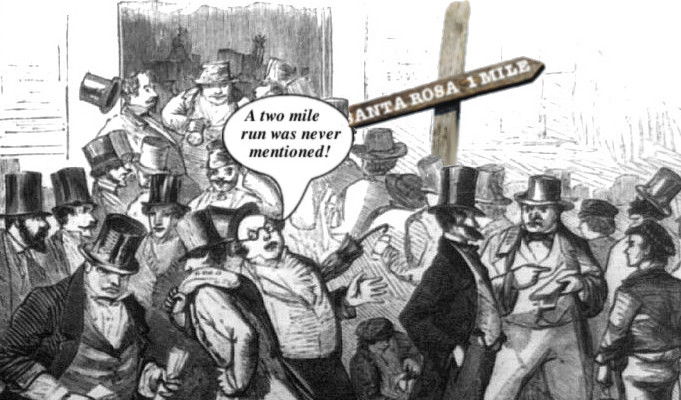 Portrait of a bad dream: After years of dashed hopes, your greatest desire suddenly comes true. You are awarded a great honor, win the lottery jackpot, whatever. Now a thousand of your closest friends as well as VIPs (whom you’ve always hoped to meet!) are on the way to your house. Except your place is a mess, you don’t have enough food or drinks and everyone will have to hike in from a mile away because of work being done on the streets. That pretty well sums up Santa Rosa’s nightmare that came true on New Year’s Eve, 1870.

By that time, Santa Rosa had been yearning for a rail connection to the Bay Area for over five years. Several times it looked like a deal was a Sure Thing, only to have investors pull out or the developer lose interest. Some of those involved were interesting characters with wildly ambitious proposals (building a suspension bridge across the Golden Gate in 1868!) but that’s a complex story too long for today. Besides, I couldn’t tell the story any better than what’s found in “Redwood Railways” by Gilbert Kneiss – the county library has several copies available for borrowing.

For purposes here, only two bits of background are important: First, the guy who finally made it happen wasn’t a banker or empire-building tycoon, but rather a San Francisco foundry owner named Peter Donahue. It didn’t hurt that his iron works made locomotives and ships.

Also, there were years of heated debate on what route the train should take from the Bay to Santa Rosa and points north. Santa Rosa pushed hard for the train to go through the town of Sonoma and terminate in Vallejo, where there were grain elevators to store Sonoma county wheat. The alternative was a straight shot north/south similar to modern Highway 101, where a ferry at “Saucelito” could take passengers into San Francisco. The route through Vallejo would not connect to Petaluma, so their town would probably wither away. There was a county vote on this in 1868 and the straight shot won.

But a referendum does not a railroad build. Nearly two years passed after vote with little to show; at the close of 1869 there was only 1½ miles of track laid north of Petaluma. Work had been suspended for the entire summer. The developer was having money troubles and a load of railroad track from England sank after the ship rounded the Horn. (There was so much railroading going on nationwide that U.S. iron foundries were at capacity.)

A popular conspiracy theory spread that Petaluma – whose high turnout of voters in the 1868 referendum settled the route question – was working behind the scenes to scuttle the railroad (or at least drag out construction as long as possible). “Cracker barrel gossip agreed the ‘earth scratching’ was just a vaccination to ward off a railroad,” author Kneiss remarked. Petaluma’s motive was supposedly to protect its monopoly on San Francisco travel via paddlewheel steamers.

Then suddenly, in August, 1870: “THE RAILROAD IS COMING! HURRAH FOR THE RAILROAD!” cheered Santa Rosa’s newspaper, the Sonoma Democrat. Voters had approved a $5,000/mile bounty for the first company to lay ten miles of Sonoma county track, and that month Peter Donahue bought the San Francisco & Northern Pacific from the developer who had made such little progress. Donahue’s operation hit the ground running with a crew of fifty Irish immigrants grading the road while schooners – with railroad ties and iron rails from his own foundry – were queued up to unload at Petaluma’s wharf.

Everything now was moving fast, and there were lengthy updates almost every week in the Santa Rosa and Petaluma papers. A month after the whirlwind restart, some folks from Santa Rosa went down to check it out and beg a ride on the little construction engine on the rails. “Although there were no cars of any kind yet, when you’re building a railroad you have an itch to ride on it,” quipped Kneiss. He added that later that same week, “Petaluma’s tycoonery [was] clustered over the little engine like flies on a cook tent pie.” (Seriously, you’ll enjoy this book even if you’re not a railroad buff.) The Petaluma Argus had a full account of their September 13 trip:

Crowded as they were, room was still made for a ten gallon keg of Edwards’ Cream Ale before the little engine went tootling down the track, stopping a couple of miles from town at Cinnabar Knoll where they polished off the keg with tributes and toasts to all involved.

Before another month passed the rail would be closing on Santa Rosa which was now suddenly a cause for worry – there were no firm plans about where the depot should be built. There were rumors that Donahue was planning to put it somewhere south of Santa Rosa Creek, or was negotiating with property owners to put it between the Creek and Third street. They didn’t settle on the final (current) location until just before Thanksgiving.

Sans depot and with not even a railroad bridge across the Creek, the first passenger train came up from Petaluma on October 22, 1870. “To many, it was a novel sight, as they had never seen one before,” gushed the Democrat, “and they could scarcely find words to express their admiration.” A week later they began running two trips daily, although the rail south of Petaluma – to the depot town named “Donahue” – was still under construction.

Still, the Santa Rosa paper purred with contentment: “At last the good work is accomplished… A new era has been opened in the history of our county, and its future is bright with promises of renewed life and activity.”

And then came the fiasco of December 31.

The Donahue river depot was now finished and ready to receive the first batch of visitors arriving directly from the city. And thus on the last day of the year, a steamer owned by the railroad left the Jackson Street Wharf, “loaded with passengers, among whom were some of the most noted and substantial men of the state,” according to the Argus.

Once aboard the train, they made the short hop to Petaluma, where “an immense concourse of people had gathered at the depot.” The tourists were greeted by the Hewston Guard (yes, that’s the correct spelling) and the Petaluma Brass Band. The cannon in the plaza was fired as well as rounds fired by the militia. It was a grand reception – but now on to Santa Rosa!

“Vague rumors were in circulation, during the early part of last week, that an excursion party from San Francisco was coming up to Santa Rosa on Saturday,” the Democrat explained later. “Nothing definite was known, however…On Friday, however, one point was settled, namely, that some excursionists were coming at the time mentioned, but as to the number all were in the dark.”

So picture this: It’s early afternoon and a “large throng of ladies and gentlemen” as well as the Santa Rosa Brass Band are waiting for the train to arrive. Until train service began a couple of months before some had never seen a train at all and since then, only an engine with a single passenger car and maybe a flat car. And now, here comes the excursion from San Francisco.

“There were, in all, eighteen cars, most of them open freight cars fitted up with temporary seats,” reported the Democrat. Over 1,200 people were on board.

And now the nightmare begins: The train got no closer than a mile from Santa Rosa – think of today’s Costco shopping center, or perhaps more accurately, the Baker avenue/101 interchange.

Making matters worse, the train would be going back in an hour. Worse still, there were only a few buggies and wagons waiting to transport the mob into town. Those who wanted to see Santa Rosa would have to run for it.

As this was suposed to be a day of bigwigs speechifying and drinking toasts, it’s safe to believe they were dressed in their finer clothes, and not prepared for a two mile sprint there and back. “The advance on the village itself was made in a disorderly manner,” reported the Alta California. From the Sonoma Democrat:

Owing to the great number of those present, it was utterly impossible to find vehicles enough to bring them all to town, and many of both sexes were compelled to walk in, a distance of nearly a mile. This was not very pleasant to begin with, particularly as but one hour was allowed to get to town and return in time for the homeward trip. Such a pushing, rushing and scampering down the road and across lots, has not been seen for many a day in these parts.

And still it became worse! Those who made it to Santa Rosa found there wasn’t enough food available. The Democrat continued:

In a short time Santa Rosa was full of people, nearly all of whom had arrived with appetites sharpened by fasting from the time of leaving the city, some six hours before. Again came disappointment, as it was utterly impossible to wine and dine such a multitude without preparation and within the brief space allowed for their stay.

According to the Alta, “…provisions were dreadfully slack in Santa Rosa. The hotel openly confessed its inability to meet the requirements of so great a host; shut up its dining room remorselessly; could not do it; could not begin to do it, but melted when besought for the sake of the Blessed Virgin a cup of tea for a suffering lady.”

“The visit was neither pleasant to our citizens nor to the excursionists,” the Santa Rosa paper admitted with admirable honesty, and “after bustling about for a few minutes in a most disagreeable and unsatisfactory manner, a grand rush was made for the cars to take them home.”

Back everyone went to Petaluma (“the down trip was remarkably jolly, under the circumstances” – Democrat) where they recovered from their Santa Rosa rout for an hour, then returned home to San Francisco on the boat where they enjoyed a banquet catered by Hendrick’s Hotel in Petaluma.

Santa Rosa probably could not have made a worst impression, nor Petaluma a better one. Looking over all that happened, you almost wonder if Santa Rosa had been punked by Petaluma and Donahue – revenge, perhaps, for pressuring the county to choose the route to Vallejo instead of the one that favored them. 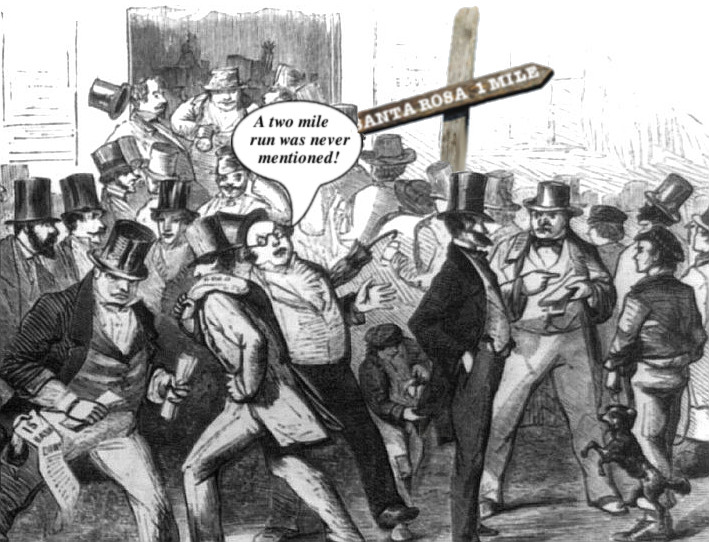