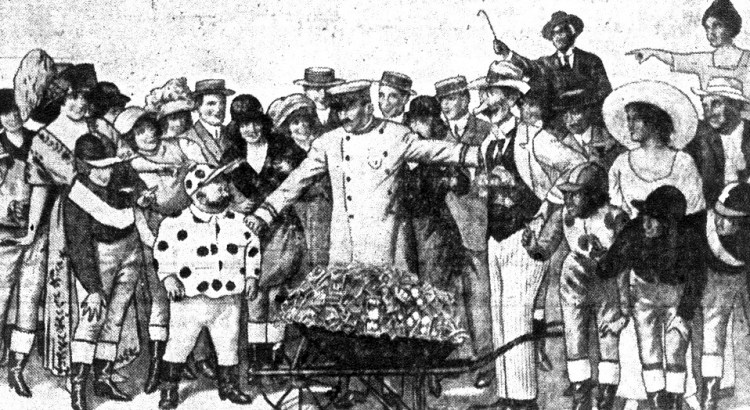 Everyone in Santa Rosa was expecting a good time that Sunday in 1913: Mutt and Jeff were coming to town.

The Press Democrat could barely contain its excitement over the musical comedy. “The mere announcement of this sterling piece of laughter and mirth should occasion considerable pleasure,” gushed the PD, “for it is a rarity nowadays to witness a play that can really tickle one’s risibilties.” After readers paused to consult a dictionary and check if risibilties were something you would want strangers messing with, the article continued by promising the audience “infinite joy…’Mutt and Jeff’ were created to make this gloomy mundane sphere of ours happy and contented.”

Well, golly. Although this was the most expensive theatrical event in Santa Rosa for the year – with best seats going for the equivalent of forty bucks now – it was still a bargain price for the promise of infinite joy.

The show had been a broadway hit a couple of years earlier, but it wasn’t that reputation which drew the Sonoma county crowd: It was the excitement of seeing Mutt and Jeff – or at least a couple of guys who looked and acted like the pair.

For around a quarter century (roughly 1910-1935) Mutt and Jeff enjoyed an unprecedented popularity we probably can’t imagine today. Besides the daily comic strip and Sunday funnies, their animated cartoons were big hits at the movies. They were the first characters to have a line of spinoff merchandise – toys, games, dolls, figurines, playing cards, cigars, golf balls, and lord help them, Mutt brand oranges.

If the names are unfamiliar, Mutt was pencil-thin with a long nose, bristly moustache and devoid of chin; Jeff was a little person, balding with ear-to-ear whiskers and usually dressed like the Monopoly game tycoon for no apparent reason. Both were always drawn wearing white gloves, even to bed. In later years the comic books and strips were churned out in cartoon artist sweatshops and became merely gags and jokes; the old stuff was zany and sometimes more bizarre than funny. There was also frequent political satire: A series of 1908 dailies had Mutt running for president for the “Bughouse” party.

Both Santa Rosa newspapers ran publicity photos for the show and ads promised a cast of fifty with enough scenery to fill two train cars. We know from reviews the production had a chorus, pretty showgirls, lots of singing and dancing numbers and a slapstick bit with collapsible stairs. There was a series of souvenir postcards (seen here) portraying various scenes and the cast in full makeup, including Mutt with an absurdly long putty nose.

The Santa Rosa performance bombed. “All who attended the performance of ‘Mutt and Jeff’ at the Columbia theater Sunday evening and paid a dollar and a half for a seat, or even a dollar, to use a slang phase, not elegant, but expressive, were ‘stung,'” The Santa Rosa Republican complained the next day. Never before in the old papers have I seen a negative review like that.

“[A]ll the members of the company evidently thought they were performing in a fifty acre field and were required to yell as loud as they could in order to be heard,” the Republican continued, and “all of them talked so fast that nobody could understand what they said.” The review also said the curtain didn’t go up until 9:45 and by then the audience’s patience was worn out. “There were some good musical numbers, and if everybody had not been tired out, they probably would have been enjoyed.” Had the theater manager been smart, he could have killed time during the long wait by calling Jacques Fehr to the stage. He must have been in the audience that evening, and it was common knowledge around Sonoma county (although possibly not as early as 1913) that the Jeff character was based on him.

Jacques, or Jacob, or “Jakie” Fehr ran a bodega in Occidental with his wife, Tillie. They sold the whatnot such stores always sold – things like soda pop, candy, tobacco, magazines and newspapers. Jakie picked up the San Francisco papers when they arrived on the train that came up the valley from the Sausalito ferry. As the often-told story goes, one morning in 1908 a passenger en route to Bohemian Grove stepped off the train to stretch his legs when the train stopped in the village. San Francisco Chronicle cartoonist Bud Fisher watched as Jakie bantered or argued with the railroad’s “candy butcher” (the person who walked the aisles selling snacks and smokes) and was amused by the contrast between the tall and lanky salesman and the four-foot-nine storekeeper. Thus sprang in his mind the inspiration for Mutt and Jeff. 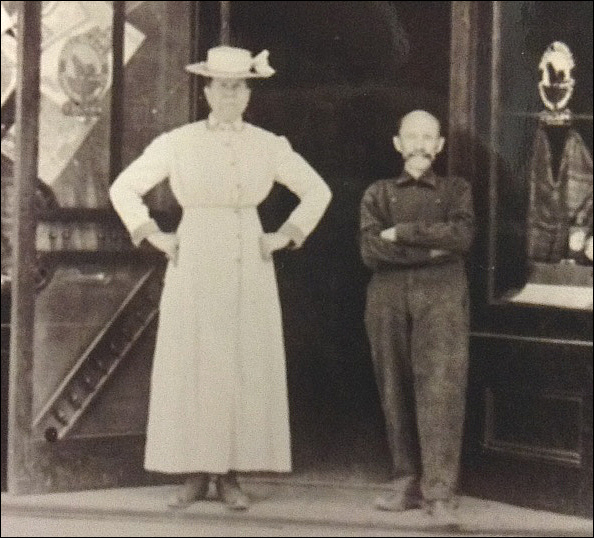 Harry Lapham grew up in Occidental in the 1930s and memorialized Jakie in a 1991 profile for The Sonoma Historian. By trade Fehr was a Swiss-born watchmaker and still did repairs; half the front window displayed watches and clocks for sale. He was actually four-foot-eight according to Lapham, and a hunchback – apparently the kids in town had “animated conversations” worrying whether his condition might be contagious, as he always licked the ice cream scoop before putting it back in the water.

It’s not known when or how Fehr learned he was the model for the cartoon character, but Lapham quotes an Occidental old-timer as recalling Jakie say, “I think I will sue this man Fisher. He has put me in his comic strip as this man, Jeff.” When Fehr died in 1938, the Press Democrat headline was, “‘Jeff’ of Famous Comic Strip Dies In S. R. Hospital” and the obituary rehashes the origin story. “From that scene,” the PD wrote, “Fisher is quoted as having said the idea of creating the strip that brought him fame and wealth was born.”

There’s only one problem with the story: I can find no proof it’s true – but lots of evidence that it isn’t. And I’m very sorry to write that; originally this article was going to be another celebration of the little storekeep with the big claim to fame.

The first problem is that the bones of the story don’t fit. Jeff first appeared in March-April 1908 comic strips (more about that in a minute) so the encounter had to happen sometime before that. As the Bohemian Club hosts its annual camp in mid-July of each year, either Fisher was passing through Occidental for a reason other than going to Bohemian Grove in early 1908 or it all happened some time before. Regardless, this wrong timeline is only a quibbling detail.

More significant is that Bud Fisher repeatedly insisted both Jeff and Mutt were invented out of whole cloth. Interviewed by a Duluth paper in 1912 and asked if they were based on two characters he knew in San Francisco, he replied: “Nothing to that. Mutt and Jeff are no one in particular except themselves. They were merely created for amusement purposes and in time came to be fixtures. They ‘growed’ in other words.” Asked a similar question in 1915 by the Washington DC Star he said of Jeff: “It is always a small ‘nut’ who believes he can whip any one in the world. The little filbert is constantly getting into musses [sic] and receiving the worst of it. To make him look more foolish I put whiskers on him.”

But that’s not quite true either – although he deserves full credit for developing two of the most memorable characters in comic history, he sure as hell didn’t invent them.

Before Jeff appeared, Fisher had a very popular strip in the San Francisco Chronicle called “A. Mutt” which appeared on the sports page. The comic had a gimmick: Every strip ended showing Mutt placing a bet on a real horse running that same day at a Bay Area racetrack. The concept wasn’t original; even back then people noticed this was exactly the same gimmick from an earlier comic strip, “A. Piker Clerk,” which had appeared in a paper in Chicago, Fisher’s hometown. The Clerk character could have been Mutt’s older brother – he likewise had a long nose, bushy moustache, no chin, and was string bean skinny.

A. Mutt was an instant hit and three weeks later Hearst hired him away to continue the comic for the San Francisco Examiner. Here the comic began turning political and moved away from being just a rip-off of the older cartoon. A story arc in early 1908 has Mutt sent to an asylum (“bughouse,” in slang) where he meets delusional patients who believe they are Napoleon, Shakespeare (etc.) and one says he is boxer Jim Jeffries. This was soon shortened to just “Jeff” and once Mutt is released, Jeff joined the strip’s cast of characters. 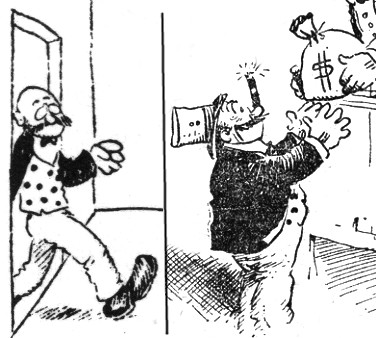 (LEFT: The “Jeffries” character drawn by Bud Fisher in March, 1908. RIGHT: Mr. Proones drawn by George Herriman in December, 1907. Other views of Mr. Proones can be seen here and here)

The original gag was that the guy who thought he was heavyweight champ Jeffries wore glasses and was probably an academic. In no way did he resemble the later Jeff character – he was slightly built but not extremely short. He did not have the top hat or formal suitcoat and shirt collar. All those elements, however, exactly match a character that appeared in Hearst’s Los Angeles paper at the exact same time Fisher began working for Hearst. The cartoon was “Mr. Proones the Plunger” drawn by George Herriman, who later created the acclaimed “Krazy Kat” comic stip. Like Mutt, Proones was also a racetrack gambler (“plunger” was slang for someone who lost on big wagers).

Today this would be called plagiarism – the equivalent of drawing Superman but replacing the “S” on his chest with a “Z” and writing he came from the planet “Clypton.” But in the day, comic artists did not own their own work, with the notable exception of Bud Fisher. Publisher Hearst owned A. Piker Clerk and Mr. Proones and was not about to sue his star cartoonist over a little matter of intellectual property theft. Still, Herriman and others knew what Fisher had done, as reported in a 1919 item in the Los Angeles Graphic, reprinted elsewhere as “The Inside on Mutt and Jeff:”

We’ve now probably wandered farther into the weeds of golden age comics than interests most Sonoma county history fans, but it’s all to make a point. Yes, Jakie Fehr looked just like comic strip Jeff. Most likely everyone passing through the village in those years commented on that. And the notion that Bud Fisher was only inspired by the confrontation between the shopkeeper and the trainman is a good GREAT story, which is why it’s repeated endlessly in writings about Occidental’s past as well as a multitude of comic history resources on the internet. But it’s going to take damn compelling evidence to show that all this “growed” out of a scene on a train platform in Occidental.