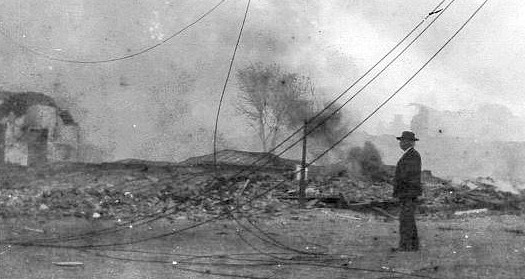 More deaths from the 1906 Santa Rosa earthquake have been found, although these victims died far away at an asylum.

Before getting into that, some bookkeeping is in order. The unofficial death toll for that disaster now stands at 82, with 85 being a reasonable bet. Although the full count can never be known, it’s still likely to fall in the 100-120 range.

This new total of 82 represents two asylum discoveries and an upgrade of three victims to “certain” status. A full list is available as a PDF or a spreadsheet, and a single-page 1906 Santa Rosa Earthquake fact sheet can also be downloaded.

Briefly: The upgrades are thanks to clearing up confusion dating back to the time of the disaster. There were four death certificates for “unknown” persons and the monument over the earthquake victim’s mass grave specifies “FOUR PERSONS UNKNOWN.” Rural Cemetery Archivist Sandy Frary uncovered the original death certificate for unknown #1 and found it was for three unknown persons, not a single individual. The monument also lists the unknown as “NOS. 1-4-6-7” which implied seven burials, so this now synchs up with a newspaper story at the time describing a coroner’s inquest of seven unknowns. All this is hashed out in greater detail in a previous article, “WHO LIES BENEATH?” which has been slightly updated to include the new confirmations.

Sandy Frary also came across an obituary I had overlooked. From the Press Democrat, August 13, 1907: 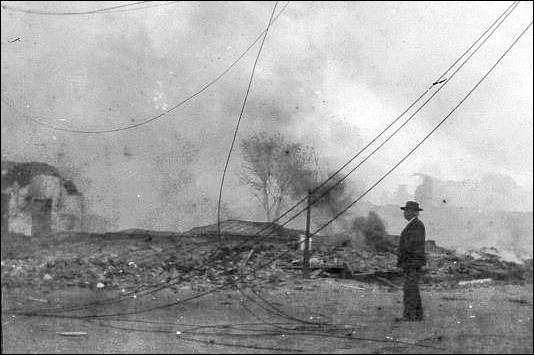 (RIGHT: Smoke and downed lines on Fourth street in the aftermath of the 1906 earthquake, one of only two photographs believed to have been taken that day. Courtesy Sonoma County Library)

Emma Stebbins, a 40 year-old housewife who lived on Ripley street, had died at the Mendocino State Hospital at Talmage, near Ukiah. She had been there almost exactly a year, her mind gone because of “earthquake of [April] 18th and death of father,” according to her commitment record. She spent her days staring into space and answering questions incoherently. Then she stopped eating and died.

The Mendocino hospital was the only place in the North Bay for regular people who lost their wits; the asylum in Napa was then used for the criminally insane, and Eldridge (Glen Ellen) was mostly for those deemed “feeble-minded” – for more background on these mental hospitals, read “THE ASYLUMS NEXT DOOR“. Those admitted to Mendocino were usually alcoholics/drug addicts who cleaned up and went home or those with senile dementia who died there. In the wake of the great 1906 earthquake, there was a surge of people whose cause of mental illness was deemed to be the disaster.

Between the April 18 quake and the end of 1906, fifteen people from Sonoma county were sent to that hospital, almost half of them for reasons apparently linked to the quake. Of those six whose sanity was shaken by the shaking earth, three died. Besides Emma Stebbins, Jacob H. Schlotterback of Santa Rosa was sent there (cause: “earthquake of April 18, 1906”) and was dead in less than a month. Like Emma, he refused to eat. Emma and Jacob count as Santa Rosa earthquake victims #81 and 82. Here we’re only collecting names of people whose deaths were attributed to being caught in Santa Rosa’s disaster, but another local who later died at the asylum was William Newcom/Newcome of Healdsburg, committed because of the “shock of earthquake.” Should it be determined he was in Santa Rosa that morning he’ll be added to the list.

Not everyone with earthquake madness went to the asylum. America Thomas died at home about ten weeks later from “general disability following general neurosis caused by shock” according to her death certificate, and Elwin Hutchinson, a 15 year-old schoolboy who died at the end of 1906, suffered from “partial paralysis and nervous prostration” (Hutchinson’s death certificate did not specify the earthquake, so he is among the three unconfirmed disaster victims). Nor did everyone with serious mental problems die; Hattie Runyon’s family kept her breakdown secret for two years.

But there was a Santa Rosan who died during the quake at an asylum: 26 year-old Annie Leete, who was working as a waitress at Agnews State Hospital in Santa Clara. Agnews was the other general population asylum in the area – the South Bay equivalent of the Mendocino hospital.

The tragedy of what happened there is probably the last great untold story of the 1906 earthquake; the destruction at Agnews was worse than either San Francisco or Santa Rosa by comparison, with over ten percent of staff and patients killed (11 employees plus 107 of 1,075 inmates).

Helen Warwick, a writer for the Oakland Tribune who was in quake-ravaged San Francisco just a few days before, wrote “never, in all my life, had I dreamed or imagine anything so totally and absolutely demolished as the Agnew Asylum.” The roof of the administration building pancaked, all five stories of it. Some brick walls fell exposing the infirmaries and some floors collapsed.

It’s impossible to imagine the terror the mental patients must have experienced being captives in their locked rooms as the world seemed to collapse around them. They were lucky no fire broke out and immensely fortunate that hospital superintendent Dr. Leonard Stocking kept a level head. After digging himself out of the debris he freed the inmates without hesitation, mobilizing about forty men into a search-and-rescue operation. Given that the hospital would have been short-handed to supervise over a thousand unconfined patients even in the best of conditions, it was a courageous action.

Dr. Stocking later wrote a report where he claimed “very few wandered away,” but that was putting the best face on it. The Santa Cruz Sentinel wrote, “Scores of the demented escaped from the boundaries of the institution and are wandering, many half clad, about the surrounding country.” The San Francisco Chronicle reported “200 inmates of the asylum escaped and are roaming over the countryside,” although most newspapers were printing 40-50 had escaped.

Rumors of all sorts flourished in the following days. Governor Pardee had a staff to refute wild stories appearing in East Coast press that San Francisco had been hit by a massive tsunami and that thousands were dying of plague. Also circulating was the claim that the superintendent of State hospitals had ordered the shooting of a hundred patients at Agnews to prevent them from escaping. 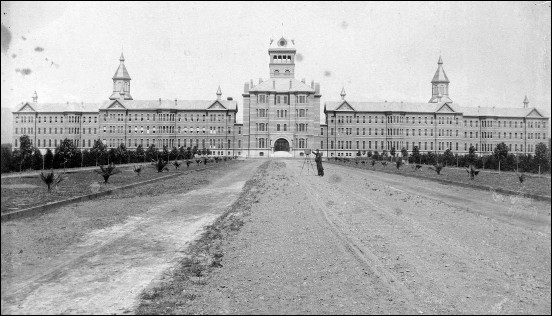 (RIGHT: Agnews State Hospital in Santa Clara before the 1906 earthquake)

For months, papers were describing deranged people arrested around the state as being allegedly Agnews escapees. A man in Los Angeles who attacked a woman at the train station and tried to drag her away; a guy “in a demented condition” found near Fremont; someone in San Francisco who threatened his mother and others with a pistol.

Fortunately, few from the “ward of the desperately insane” seemed to have escaped. Their housing was on the top floor of one of the buildings most damaged, and seven died. Deputies from the Santa Clara Sheriff were quickly on the scene and followed by other officers – by remarkable good luck there was a state sheriff convention underway in San Jose. The most violent 99 patients were sent to the Central Valley asylum in Stockton by train, according to a wire service story, “crowded into two [rail] cars and were raving and yelling. Many of them attempted to jump from the cars and the attendants had great difficulty in restraining them.”

Volunteer doctors and nurses also poured into the grounds of the wrecked hospital, where medical care was provided under the trees to the approx. 180 patients injured. By nightfall a tent city had arisen. Dr. Stocking’s report described it in glowing terms: “..so comfortable and contented are they that many, both employees and patients, ask to be allowed to camp all summer.” But reporter Helen Warwick painted a different picture: “Some were chatting rationally enough, wandering about from one place to another, others stood and gazed, wild-eyed and dumb–an awful rigidity in face and figure arguing desperate insanity. Some were strapped to benches; some threw their hands in the air and grappled with some imaginary foe, while one woman shrieked and screamed, that the walls were falling, falling, and cowered to the ground begging the others to keep them off.”