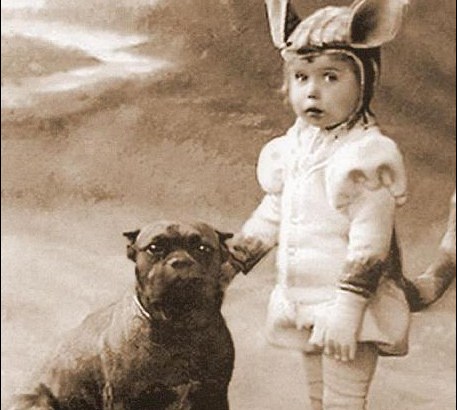 Once I heard a renowned journalist asked about his worst assignment as a newspaper cub reporter. “Dog shows,” he answered without hesitation. “People get miffed if their own personal details are slightly wrong in a story, but misspell the name of their prize-winning dog or make a mistake about its precise breed and the owner will call your editor, publisher, and chairman of the board demanding a front page correction and your head on a plate.”

Yikes! If dog show assignments were that dreaded in the 1950s and 1960s, one can only imagine how nervous reporters must have been a half century earlier when the events were a really big deal, with newspapers devoting several pages to list the complete judging results. Photos of selected dogs and their owners often accompanied the coverage, which typically appeared in the sports section – unless the show was sponsored by a “ladies” kennel club, in which case it was shunted off to the society pages.

The first contest in America to judge dogs supposedly happened in 1876, but I’ll bet it probably occurred about five minutes after the guy with the second dog stepped off a ship from England and encountered the guy with the first dog. Dog shows also appear to function as a kind of cultural barometer; lots of shows in good times, not so many when times are lean. The years following the Great Earthquake and the 1907 Bank Panic were not happy ones in the Bay Area, and there were only three shows each in 1907-1908, one of which was a combined dog and poultry affair. But the boom year of 1912 witnessed seven around the Bay Area, including one in Santa Rosa. (There was also a single Bay Area cat show that year, but it turned into a “free for all,” according to the San Francisco Call, after cat owners took umbrage at the judging.) That 1912 dog show generated considerable excitement in Santa Rosa; despite the town being filled with visitors, most downtown stores closed early that Saturday night so store clerks could attend the show. Less clear today is what kind of impression the show left upon them because our attitudes towards our pets have changed so much. Dog show attendees back then might have been shocked at the idea of our modern pampered pooches living indoors as members of the family, and considering neither kibble nor canned dog food existed yet, they would have been gobsmacked to learn that feeding our doggies is now a multi-billion dollar industry.

Not to say our ancestors did not have great affection for dogs; when Santa Rosa’s fire department dog, “Buster,” was hit by a car he merited an obituary in the Press Democrat. “He was run over and killed by a careless auto driver who had the entire street, and yet would not get by without killing Buster,” lamented the PD, noting the pup was “a favorite with all who have occasion to visit the house or pass it regularly.” Years earlier in the coverage of the heated 1905 Battle of Sebastopol Avenue the only true “human interest” story described “Bum,” a dog that became the mascot of the Petaluma & Santa Rosa Railway, catching rides back and forth as workers competed for his/her attention. And one of the most popular stories ever to appear here involved the 1905-1908 court battle between two men over ownership of “Queen, a valuable varmint dog” – even though the dog had actually died in 1906.

The dark side of the dog show event is whether the economic boost it brought to Santa Rosa caused its newspaper editors to censor themselves. A few weeks before the 1912 show, the San Francisco papers reported Mrs. Maude Duffy, a 24 year-old mother of two, had died of rabies (it was called “the violent disease” in that day) which she contracted from a Santa Rosa dog. Although this was exactly the sort of horrible and tragic death the Press Democrat loved to feature, not a word about her fate appeared in either paper. On the day of her funeral, the Santa Rosa Republican even offered a little editorial about the cruelty of docking a dog’s tail, comparing it to cutting out someone’s tongue so they could not speak.

When the show was over the PD ran an article where the judges and dog owners praised Santa Rosa for its swell show, accompanied by a three page list of ribbon winners. Among them were “Aviator Wonder” and “Dictagraph C” (bull terriers), “Wally von Bluetenwinkle” (dachshund), “Pom Patch Psyche” and “Fluffy Ruffles III,” which took the prize as the best toy dog. Champions all.

Unless you chance to be a 1913 model of the toy dog fancier, whose fetich [sic] in dogology is real blue blood of the bluest color, you are quite naturally oblivious to the fact that Santa Rosa is at the very crater’s edge of a social function in dog land that is setting the aristocrats of the dogdom of the state into a frenzy of expectant excitement.

You have lazily read, or perhaps heard of the fact that the Kennel Club of this city is arranging its first annual dog show. Perhaps you have yawned your indifference, but the fact may not so much as have percolated your cuticle that the same dog show, with its very first bow to the public, is going to prove one of the most aristocratic events in highly bred dog society ever attempted in any city of the state, aside from the home of dog shows, the City of San Francisco itself.

Because of your possibly near confession of indifference, this is  solemn warning for you to wake up and rub your eyes and then bestir yourself, for Saturday, next Saturday, and all day and evening Saturday, this city is to be the guest of scores of the most famous prize winning, heart capturing dogs of every class, color, size and breed you have ever seen assembled.

World’s champions, national champions, state champions and several score of aspirants for championship honors to come are to be here. To be exact, there was the glittering total of one hundred and sixty dogs entered last night. And there may be more to come.

And with these dogs, one hundred and thirty of which come from the most famous breeding kennels of the state outside of Sonoma county, will come many of the elect in society from exclusive Burlingame, San Mateo and Piedmont to battle for supremacy with the owners of dog kennels in this portion of the state. Great Danes and Bernards and Newfoundlands will yelp and bark their challenges to English Bulls and Scotch Collies, while pink- beribboned poodles of the fluffiest and softest of coats will strut their pride to the delight of the women and children and the disdain of their more powerful brother and sister canines.

Sixty-one handsome trophies have already been hung up as rich prizes to the dogs of most decided points of superiority. With such an array of trophies the reason for such a phenomenal entry list is not far to seek.

The show is to be held in the old armory, adjoining the A street rink, which is fast being prepared for the blue bloods of dogdom. And you who still lazily read these lines would better beshake [sic] yourself and view these dogs on dress parade next Saturday. All Sonoma county dog lovers will be there in force and it will be a dreary day for you if you attempt to find your ordinary relaxations in your usual haunts, because they will be deserted. Everyone will be at Santa Rosa’s first aristicratic [sic] dog show.

A little army of men is as busy as bees pushing the work at the old armory on A street, preliminary to the big “toy dog” show which the local Kennel Club is offering as its curtain raiser in Sonoma County.

Two facts in themselves will make Saturday’s “toy dog show” unusually notable, if there were not a dozen or a score, other casing to accomplish that result.

These two principal facts are, first, the large number of blue ribbon winners from other dog shows, which will be brought to Santa Rosa for competition, and second, the famous dog show judges who will come here to indicate the blue ribbon winners.

To name the famous prize winners that are coming would be to name many of the nation’s finest canines. In all there will be fully 170 pure blood dogs of every breed and size displayed on the benches that are now being built around the entire outside of the immense floor space. Thirty of these animals will come from Sonoma county, while the balance, some 140 in number, will come from the most noted kennels of the state, including the kennels of many wealthy dog fanciers of Burlingame, San Mateo, Piedmont and other fashionable society sections.

Probably the most notable dog, from the standpoint of “perfect,” is Miss Vera Lindgren’s toy poodle. Nicholas Longworth, said to be the most perfect poodle in America. No less a dog authority than Judge James Mortimer is responsible for the statement that Nicholas Longworth is as near 100 per cent correct as he believes a dog can be bred. Nicholas, although diminutive in size, carries his championship honors with a dignity that would do a Great Dane proud, holding his somber, though baby-like face, at an angle that reflects an almost snobbish knowledge of his doggish superiority. Even the curl of his tassel-cropped tail shows that Nicholas realizes he is “some dog” and doesn’t care who know its [sic].

– Press Democrat, October 17, 1912
THE STORES TO CLOSE AT EIGHT
Everybody Will Visit the Dog Show Tonight and Business Will Be Suspended Early

Local merchants are interested in the first bench show given under the auspices of the Santa Rosa Kennell [sic] Club and to manifest this interest in a way to assist the mangagement to make the show a success have agreed to close their places of business tonight at 8 o’clock to allow employes [sic] and others to attend the show.

Under the rule adopted some weeks ago all grocery stores close at 8 o’clock. In addition for tonight the following will also close at that hour: