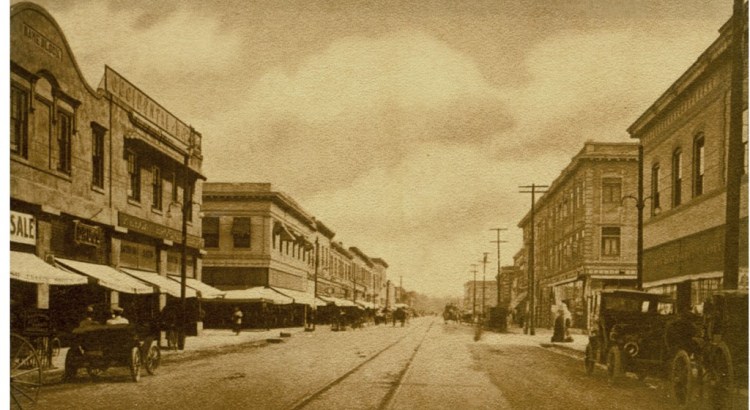 Driving to Santa Rosa? Be forewarned police there are enforcing unreasonable new laws, such as requiring cars to have mufflers, red tail lights, and drivers to stay on the right side of the street.

It was 1912 and cars were now seen everywhere, thanks to new inexpensive designs such as the Ford model “T” and the introduction of dealership loan financing. But California still had no motor vehicle code, aside from some basic laws such as requiring drivers to stop after an accident. Cities and counties were expected to set their own rules and regulations. In Santa Rosa drivers were required to honk the horn at intersections; in Lake County motorists had to stop and turn off their engines if a horse was approaching. Petaluma police would write a ticket for having a car without a muffler but until 1912 Santa Rosa didn’t care. Speed limits varied everywhere, leading to the birth of the speed trap as a boon for government budgets everywhere. All that and more is covered in an earlier item, “The Rules of the Road are Relative.”

Santa Rosa’s City Council passed a few new road rules in the summer of 1912, none of them seemingly controversial today. No U-turns in the middle of the street; have lights on after dark; stay to the right, pass on the left. The latter may seem like a particular no-brainer but consider the two photographs of Fourth street below, from 1910 (L) and 1911 (R), both showing a car toodling down the wrong side of the street. (Photos courtesy the Larry Lapeere Collection)

According to the local newspapers, these new laws created a terrific uproar. “[M]any persons expressed disapproval of the new law in the most expressive terms,” reported the Santa Rosa Republican. “One man even declared he would never return to Santa Rosa again. Several times during the day it seemed that trouble would ensue and that arrests would have to be made.”

Tempers flared at a big Chamber of Commerce meeting a few days later as store owners complained “many of their patrons had told them and many other merchants that rather than be held up for failing to comply with the ordinance they would trade elsewhere.” A resolution was passed to create a committee to advise City Council on what downtown wanted for traffic enforcement, and by the end of the year the part of the ordinance was repealed that made U-turns illegal in the middle of the street. The police officers, who had been “busier than bird dogs” when the new laws took effect, also backed off writing tickets.

But come the beginning of 1913, enough was enough. According to the Press Democrat, “Every effort has been made to instruct the traveling public in the new ordinance and to give them the benefit of all doubt. Recently a man has been placed on duty at Fourth and Mendocino avenue, to enforce the ordinance, and he has barely escaped being run down repeatedly himself.”

It seems Santa Rosa’s driving maniacs were keeping to the proper lane only on the straight-away, but when they made turns some were cutting the corner dangerously. “Plans are being made to place officers on duty at various corners in the city without further warning and arrest every one who fails to make proper turns…A string of fines will, it is believed, have the most effect that warnings have failed to give,” noted the PD.

Of course, this gave the city cops – who already had great discretionary power to judge who was speeding, in those days before radar guns or other tools – the ability to write tickets based on the degree to which they thought drivers strayed out of their lanes while turning. “It will also enrich the city treasury,” the PD added. You bet it would.

LOOK OUT! DON’T VIOLATE THE LAW
Traffic Ordinance Regulations Regarding Cutting of Corners, Etc., Will Be Strictly Enforced Now

Owing to the persistent ignoring of the traffic ordinance by auto and team drivers, drastic steps looking to a strict enforcement of the measure. Every effort has been made to instruct the traveling public in the new ordinance and to give them the benefit of all doubt. Recently a man has been placed on duty at Fourth and Mendocino avenue, to enforce the ordinance, and he has barely escaped being run down repeatedly himself.

Plans are being made to place officers on duty at various corners in the city without further warning and arrest every one who fails to make proper turns. The law is made for the safety of drivers as well as of those in vehicles, and when an accident occurs it is always because some one has ignored the right of road.

Monday afternoon a motorcycle was run down at the above-named corner, owing to an auto driver ignoring the law and cutting the corners. The police are determined that the practice shall be stopped. A string of fines will, it is believed, have the most effect that warnings have failed to give. It will also enrich the city treasury.

– Press Democrat, February 11, 1913
WARNING GIVEN AUTO DRIVERS
Must Carry Tail Lights as Required by Law or Arrests are Likely to Follow

The attention of the police department has been called to the fact that many of the automobilists are not observing the law in regards to carrying tail lights on their machines. Several rear end collisions have been narrowly averted of late.

Chief of Police John M. Boyes wishes automobile drivers to see to it that they carry lights as prescribed by law, and which includes a tail light. He hopes this warning will be obeyed immediately or else arrest and prosecutions will follow. A lamp in time means the saving of a fine.

– Press Democrat, January 28, 1912
AUTOS AND MOTOR CYCLES MUST ALL BE MUFFLED

There are doubtless many people who will give vent to a fervent “Amen,” or something of the sort equally as expressive when they read that at last night’s council meeting an ordinance was introduced by Chairman R. L. Johnston, and passed the first reading, which provides among other things for the use of mufflers on all automobiles, motor cars and motorcycles driven or ridden in the city limits. When this ordinance is adopted it will mean the ending of a decided nusiance.

The ordinance contemplated also provides strict regulation for the observance of the rules of the road, compelling drivers of machines, etc., upon meeting each other to go always to the right, and in overtaking to go to the left. It also provides for the proper turning of street corners and a number of other desirable changes from the old order of things, which daily causes much confusion.

It also provides that after nightfall all automobiles, motorcycles and ordinary bicycles shall carry lights. There are many other requirements in this ordinance which was referred back to the Ordinance Committee.

Bicycle and motorcycle riders must not ride without having hands on their handlebars. Vehicles must run to the edge of the curb and stop when the fire bell rings. The penalty for disobeying the ordinance is a fine from $10 to $250 for each offense.

The Santa Rosa traffic squad, consisting of Officer I. N. Lindley and Officer George W. Mathews, had a busy day on Saturday. As one of them expressed it, they had been “busier than bird dogs,” and at nightfall they felt that they had doubly earned their stipend.

It was the duty of these officers to instruct drivers of vehicles in the new ordinance which has been adopted and to them many persons expressed disapproval of the new law in the most expressive terms. One man even declared he would never return to Santa Rosa again.

Several times during the day it seemed that trouble would ensue and that arrests would have to be made. These were avoided, however. After a certain time in instructing the people, arrests will be made for violations of the ordinance.

The special feature of business at the meeting of the Chamber of Commerce Thursday night was a discussion of the new traffic ordinance. There was the largest attendance of the members that has been noticed in some time, and the interest taken in the discussion was very marked. Many business men of the city participated and gave their view. Two resolution prevailed.

A further resolution, offered by A. O. Erwin and seconded by Max Rosenberg and carried was to the effect that the present ordinance, inasmuch as it provides a regulation that traffic keep to the right, is all that should really apply to Santa Rosa at the present time, this suggestion not including, of course, those regulations regarding speeding, riding on sidewalks, lights and other essentials for the safety of the public alson in the ordinance.

Among those who spoke on the subject were…

One of the main faults found with the ordinance by the speakers at the meeting was the requirement that wagons be unloaded alongside the curb and not permitting wagons to be backed up against the curb at heretofore. It was stated by several that in large cities where similar ordinances are in force wagons are allowed fifteen minutes to unload or load while backed up against the sidewalk.

Another objection was the requirement that people drive to the corners of streets before they can turn around. An opinion was expressed that this requirement rather aggravated instead of relieved congestion.

It was suggested that people be permitted to turn in the center of the street, where it could be done without putting traffic in a hazardous condition.

It should be stated that the speakers made it plain that they were not speaking in a spirit of criticism of the City Council’s enactment of the traffic ordinance, but rather in the interests of the city as many of their patrons had told them and many other merchants that rather than be held up for failing to comply with the ordinance they would trade elsewhere.

Mayor Jack Mercier and members of the city council passed an amendment to the traffic ordinance at a meeting of the city fathers held on Friday evening.

Under the terms of the amendment section five was permitted so as to permit teamsters and drivers of any kind of vehicles to turn any place on the streets without the necessity of going to the intersecting corners, as was necessary under the former ordinance.

The ordinance regarding vehicles keeping to the right side of the street is still in full force and effect and all vehicles must turn to the left in reversing their direction on the street.

Many persons will hear with pleasure that the obnoxious section of the ordinance requiring the going to intersecting streets has been abolished and that they may turn at will wherever they find it necessary or take the notion.