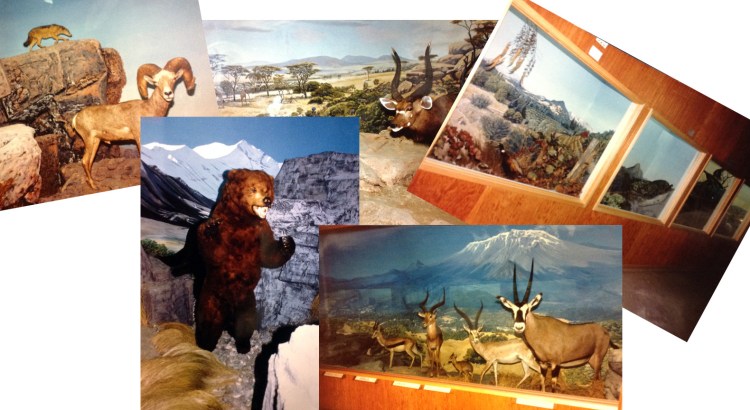 Santa Rosa schoolkids in the 1960s-70s may remember field trips to the museum. No, not to the place on Seventh street with its neoclassical architecture – that didn’t open as a museum until 1985. Before that the schoolbus drove to a nondescript industrial building on Summerfield Road which was the “Codding Museum,” although in truth it was mostly Hugh Codding’s hunting trophy room.

Codding, it seems, had been blasting away on all continents (except Antarctica) since the late 1940s. “I don’t say hunting is good,” he told a biographer, “it’s just the way I am. I don’t play golf. Hunting and fishing I like because you get a little reward at the end. It’s like a stick with a wienie on it.”1

Inside the “Codding Foundation Museum of Natural History” (as it was formally known) there were some four hundred stuffed animals or parts thereof. There were bears of all kinds in scary poses, a Bengal tiger and a leopard along with other animals that had menacing claws or antlers. There were entire walls of mounted heads and sometimes the big game wasn’t so big; there was a South African dik-dik which was about the size of a cocker spaniel when Hugh killed it. There were glass eyes staring back at you from all directions. There were dioramas where the animals were arranged in something like their natural settings, except the animals never moved or blinked. It was like visiting a dead zoo.2

That museum at 557 Summerfield Road was shared with the Sonoma County Historical Society, which rented the front lobby from Codding for $1/year. What was displayed in their room was mostly random old bric-a-brac better suited for an antique (or junk) store, as described in the previous article. But Codding was using the Historical Society’s participation to lend his taxidermical souvenirs a measure of legitimacy. That motive was clearly on display in early 1963 when he sought permission for a 5,000 sq. ft. building at the NW corner of Hoen and Farmers Lane. He told the Santa Rosa Planning Commission it was to be charitably offered to the Society while the “remainder would be devoted to items of natural history interest.” That plan was scrapped later that year when Codding’s tenant at the Summerfield Road address moved out, making a space of the same size immediately available. The Historical Society and Hugh’s stuffed things moved in there and opened a few months later.

Having his trophies on display did not end or even slow down Codding’s hunting trips and safaris, and when the museum opened he said it would need to be expanded in a couple of years. If anything his urge to bag wild game only increased after the mid-1960s. When he was on the City Council many votes were missed because he was shooting up in Alaska or elsewhere. Wyoming was a favorite; he and a handful of buddies would disappear up there for a week or more at a time.

Although he had killed one elephant (at least), Codding bought a baby one for $7,500 and avoided paying sales tax by claiming it was livestock he was fattening up. “The city attorney threw a fit,” he told a biographer.3 He had his construction crew build an elephant house near his home, hired a trainer/handler to care for it and after awhile the animal was making regular appearances at the newly-opened Coddingtown, which was then unroofed. He kept it about six months before sending it back to the Southern California dealer.

The curator for the overall museum was Ben Cummings, a retired chemical engineer and Hugh’s brother-in-law. He had no experience with managing any sort of museum but was a conservationist, having been chairman of that committee at the Sierra Club’s big New York chapter. Ben was also a fine artist and the landscapes seen in the dioramas were his work. He quit in 1981 1984 to take up painting fulltime after declaring there was nothing more for him to do at the museum, according to a Press Democrat interview.

In truth, there was lots of work to be done. While his dioramas were realistic, that sort of static tableau was widely considered outmoded. In the photos below it’s shown the signage was just a card naming the animal(s) seen behind a plate glass window – unless visitors were being guided by a very adept docent, there was nearly zero educational content to be gleaned. By then, better museums were incorporating videos into displays or using Walkman cassette players to provide high quality self-guided tours.

Besides being over forty years younger than Cummings, the new curator was an actual scientist committed to environmental education: Paleontologist Raj Naidu. He put most of the trophy heads in storage, added new regional geology and fossil/dinosaur displays, expanded community outreach and began programs for docents and teachers. Naidu told the PD that “our visitors these days know we’re not a ‘glorified trophy collection.'” It’s said Codding did not get along well with Naidu, and it may be because of that.

Attendance was now better than ever, drawing 10k visitors a year. But once the history museum on Seventh street opened in 1985, Codding’s offering was at a crossroads. Yearly operating expenses were $100,000 and completely underwritten by the Codding Foundation. In May 1989 the Coddings gave Naidu notice they were shutting it down. Hugh told the PD the closure “has nothing to do with finances” and today Connie Codding says Hugh was crestfallen to learn people were disparaging the museum because of the wildlife trophies.

Closing the museum meant those many hundreds of wildlife trophies would need to be rehoused or liquidated. Some would be kept by the family or given away. Selling many of them, however, would be difficult or even impossible; the world had changed since Hugh’s killing spree began in the 1940s and many states now banned the sale or purchase of wildlife taxidermy, particularly when the species was endangered/threatened. California (as might be expected) has the strictest laws in the nation.4 To Hugh Codding’s great good luck, in to his newly shuttered museum walked Ron Head, who was hoping to score a Tule Elk trophy for his classroom.

Ron was a hugely popular instructor at Petaluma High School, teaching environmental/natural resources classes. Earlier that same year he had taken the school’s Outdoor Activities Klub [sic] whitewater rafting on the American River and had launched the “Animals for Everyone” program, where high school students visited elementary schools and community groups to show and speak about exotic animals including pythons, a boa constrictor and a tarantula.

“Kids come in expecting Bambi, but I do my best to burst their bubble about the natural world,” Head told the Argus-Courier. “Our class is not like a Disney movie; there’s never a dull moment.” In 1976 he invited an owner of a tame mountain lion to bring it in to his classroom where it roamed around unleashed.

Codding and Head hit it off well enough, as both were outdoorsy types and especially because of their shared interest in hunting. Ron was offered a job which he turned down.5 Undeterred, Codding made another offer: Head could have the entire inventory of the museum. Free. There was only one catch: He would only give the collection to a non-profit.

For Codding this would be the sweetest deal possible. There were no restrictions on donating a taxidermied creature, even those species which could no longer be stuffed under state, federal or international laws. And since it was to be a charitable donation, there was a tax write-off for its full value – which was pegged at $1,000,000.

For schoolteacher Ron Head it would be like cliff diving into unknown waters. He would immediately have to create a 501(c)(3) corporation, convince the school board to allow that and allow him to accept the collection. He would have to find a large enough space to house it all. And he would have to fundraise hundreds of thousands of dollars.

Against high odds, Ron pulled it off. Aided by an outpouring of support from the Petaluma community, a small army of volunteers and workers from the Codding construction company, an old bus garage on the high school campus was converted into the Petaluma Wildlife Museum, which opened in 1992 (see sidebar).

There are still some heads on the walls but the larger animals are no longer encased behind glass in dioramas. It is very much a hands-on experience for small kids to have memorable encounters with the museum’s living “animal ambassadors” and for the older students serving as docents to gain confidence and teaching skills.

As for questions about the dead mounted animals, the docent handbook suggests explaining honestly that Codding killed them “because he wanted trophies.” If the visitor struggles with understanding that answer, a docent can offer a carefully balanced perspective: “Mr. Codding came from a different era, one in which attitudes towards trophy hunting were different than they are today. You can also continue to explain that, today, we know that trophy hunting is usually a destructive practice, but because Mr. Codding donated these animals to us, we can use them as examples to teach you why it’s important to protect them.”

Connie Codding says she and Hugh visited the Petaluma museum many times and a child once recognized him, presumably from the bronze bust on display. The youth told them he couldn’t wait to be old enough to be in high school and learn to become a docent. “He just glowed with happiness when he heard that,” she recalls. 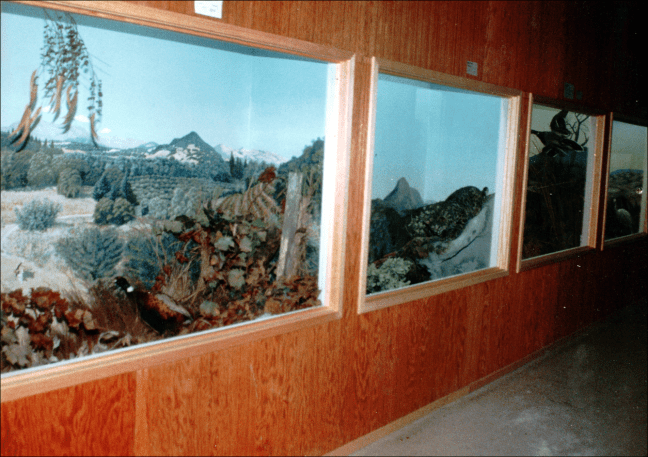 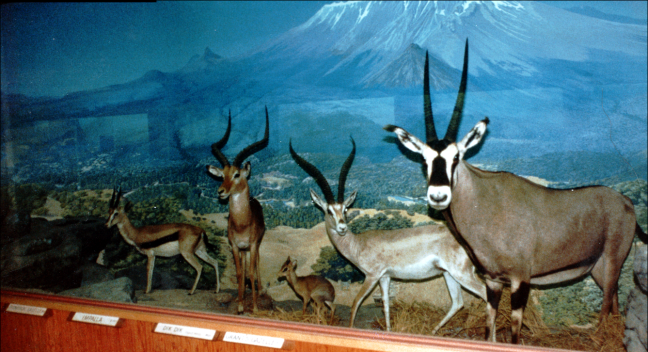