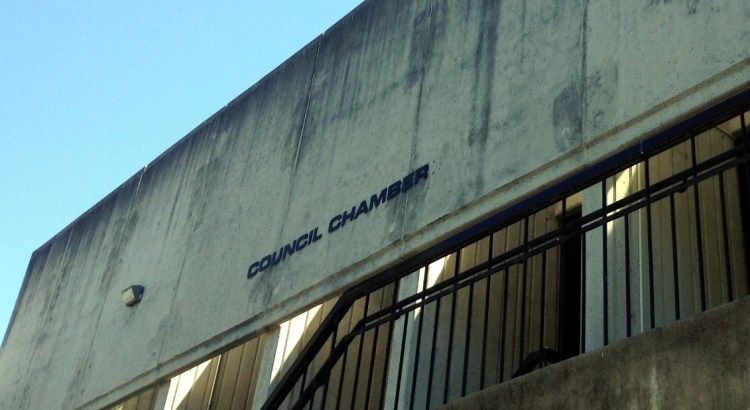 “This is why we can’t have nice things” was a popular quip a few years ago; it’s something to say after discovering something cherished has been trashed. Every time I step into the courtyard of Santa Rosa’s city hall complex that’s the phrase I mumble (okay, whimper) because underneath this reinforced concrete monstrosity is the filled-in bed of Santa Rosa Creek.

(This article is the back half of the story which began in “HOW WE LOST SANTA ROSA CREEK…” and should be read first, as it explains why the creek was covered and traces the origins of the Urban Renewal Agency.)

Even in the URA’s early days – while they were still pondering how much of Santa Rosa’s historic downtown deserved to be wiped out – there was agreement there should be a “civic center” built somewhere within that area. The contrary voice in 1960 was developer Hugh Codding, who volunteered to donate “as much as you need” on Steele Lane, near where he was building his new shopping center.

Codding’s quest to sell, lease, or give away land for a civic center is one of those epic tales about our town’s wild and irrepressible developer. He first offered the city space in 1950 at Montgomery Village – although it was then outside of city limits. In the mid-1950s he offered another spot near his shopping center, this time at the corner of Fourth St. and Farmers Lane. Once Coddingtown was up and running he offered either of two Steele Lane sites in 1963 and when the City Council still didn’t bite, he tried to broker a deal for city hall to become part of the new county administration center (which would have put Santa Rosa’s city offices on unincorporated county land). After this the Press Democrat editor wrote, “a city hall is not some toy on wheels, to be moved around from one outer boundary of a city to another where property developments happen to be going on.” Undeterred, Codding once more pushed the Steele Lane location in 1964. The next year Hugh was back again, this time with site plans. But he was now a member of the Council, and the city attorney pronounced Santa Rosa could never consider any of his properties because it would be a conflict of interest. True to form, Hugh offered to resign on the spot – as long as they would accept his deal.

Although Codding remained the key player in the overall tragedy of Santa Rosa’s urban renewal scheme, that’s the extent of his involvement in this chapter on the city hall and what was to be built over the entombed creek. This time center stage belongs to one of his main adversaries: The Santa Rosa Burbank Center Redevelopment Company, which was formed in 1963 to “compete” for properties under the URA’s control. (“Compete” is in ironic quotes because their bids won even though they paid nothing until the price was negotiated at a later date – a sweetheart deal that never failed to raise Codding’s ire.) The locally-owned investment company was headed by five general partners, including Henry Trione as CEO/President. In the newspapers it was commonly called “the Burbank Center” or “the Burbank group,” but since those names have other uses today they are referred to as simply SRBCRC here.

The SRBCRC hired a team of top-notch architects and redevelopment experts, launching with an ambitious $12 million proposal to redevelop the entire downtown area including Courthouse Square. It was already presumed that the courthouse would be demolished and the square would be split in half by the new Santa Rosa Ave/Mendocino Ave connector.

Foremost among their celebrity consultants was architect John Savage Bolles who designed Candlestick Park, the spiky Birkenstock building in Novato beside Hwy 101 and most NorCal Macy’s. Straddling the divided Courthouse Square he envisioned a 6-8 story “Civic Tower,” later expanded to fifteen floors. The attorney for SRBCRC boasted it would be a “landmark…people will be able to see the tower from as far away as seven miles.” The description in the PD said there would be parks on either side, including two lakes (!) and a constant-flow artificial creek.

For the lost creek area, SRBCRC proposed to build a retail complex which would cover eight acres including a major department store with three floors, a junior department store and numerous specialty shops, according to the PD. There was to be some sort of 800-foot covered walkway from downtown. Also, “an attractive artificial creek would replace the natural Santa Rosa Creek, which has been placed underground.”

The Agency gave SRBCRC the nod in 1964 to develop the creek site, followed by tentative approval to build the retail complex there. (You just know they would have added insult to injury by naming it “Creekside Mall” or similar.) The 15-story skyscraper on Courthouse Square was less of a sure thing, although one of the SRBCRC principals said experts had assured them that the “best way” to guarantee Santa Rosa’s commercial development would be for the civic center to be on the Square. A 22-member civic center site selection committee was appointed – with Judge Hilliard Comstock, chairman – and Henry Trione quickly asked the City Council for them to delay picking a location for up to 12 months.

There were legit reasons to postpone the decision. While a large citizen’s group had earlier voted for the redevelopment area to include a “civic center,” there was no agreement on what that meant. Some were thinking it would be an art gallery, museum and cultural center with an auditorium; others interpreted it to mean a new city hall/municipal center, or a combination of both. Complicating the situation was that Santa Rosa already had a perfectly serviceable city hall next to Courthouse Square, and that building was not scheduled for demolition (yet). 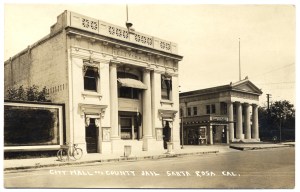 Plus there were sticky legal questions of whether SRBCRC could build their civic tower at all. The deal SRBCRC wanted was to buy Courthouse Square, build the tower and lease it back to the city. But the Square wasn’t for sale – it was not deemed a “blighted” part of downtown by the URA and Washington apparently didn’t allow redevelopment projects to be amended once they were approved. Nor was it clear whether the Square was city or county property – a debate readers might recall also came up in 1883, as told in “HOW COURTHOUSE SQUARE TORE SONOMA COUNTY APART.” Site committee chair Judge Comstock looked into the issue and reported that although the county feels it owns the Square because of its long use, ownership remains unclear because it was originally the city plaza; the descendants of Julio Carrillo et. al. might have a case to demand it back if it were now sold as private property to SRBCRC.

Hilliard’s report was apparently the death sentence for Courthouse Square tower. Two months later, in April 1965, the site committee announced it had chosen the “Luther Burbank site,” meaning the current city hall location. A bond was placed on the ballot to buy it which passed with a whopping 92 percent voter approval. Curiously, this same bond deal – a city hall over the creek – had been offered two years earlier and failed badly.

An architectural competition followed, and out of 73 entries the winner was Richard L. Heglund of Marin County. The Press Democrat only published a drawing of the first runner-up (see below), so one has to recoil at the thought of how awful the rest of the pack must have been.

On the day it opened on June 7, 1969, the PD editor had written: “Efficiency does not have to be ugly, and the new home of incorporated Santa Rosa has not sacrificed attractiveness.” Mayor Jack Ryersen swooned that the design met “the challenge of excellence.” How things change: Recently former Mayor Chris Coursey told the paper “I’ve always thought it was one of the ugliest buildings in town…a complete waste of space.” You would be hard pressed to find anyone who disagrees with Chris; I’ll add only this is how I imagine Chernobyl looks.

In defense of the architects, “brutalism” was much in vogue at the time for public buildings, and this is far from the worst example – take a gander at Boston City Hall which was built at the same time, likewise the spawn of a urban renewal project. And while I personally couldn’t imagine approving this design in 1966, the courtyard drawing is more appealing than real life, making the space appear light and airy instead of being overshadowed by those meaningless obelisks and oppressive, top-heavy buildings.

But is there an “attractive artificial creek” as officials had been promising ever so often? Funny you should ask. 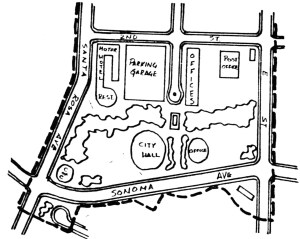 Gentle Reader might recall this faux creek was first mentioned while decisions were being made to enclose the real thing inside the box culvert. At the same time in early 1963, the city was preparing for the bond (the one that failed to pass) which was to pay for a city hall complex on top the lost creek location. The PD published an unattributed, back-of-the-envelope site plan seen here at right; those big squiggly areas in the middle are the fake creeks – or more likely a single fake creek with a bridge over the middle, as the accompanying article mentioned landscaping “somewhat like that in Juilliard Park.” And as noted earlier, SRBCRC said there would be an artificial creek on the site when they were planning to make it a retail complex.

Instead of any of that, we got a splash fountain in the courtyard (see photo below) and only because the Saturday Afternoon Club was willing to chip in half of the $15 thousand cost. It’s now been filled in and used as a planter.

The only upside to this dismal tale is that Santa Rosa Creek had its revenge, of sorts. The box culvert swings towards the south end of the property and the buildings are built directly above the original creek. When the contractor began pouring the foundation pilings 1967-1968, they ran into serious problems because they encountered uncompacted soil – rubble that had been dumped on the banks of the creek following the 1906 earthquake. Construction work came to a halt until it was removed.

We knew that hundreds of loads of bricks and debris were used near the E street bridge to specifically fill in the approaches for a new bridge, but apparently the whole length of the creek near downtown was used for refuse disposal.

That stretch of Santa Rosa Creek also had received quite a bit of misuse in earlier years, being an open sewer in the late 19th century and then in the early 20th, being used for the discharge of toxic waste by factories and PG&E. Despite all of that the creek always bounced back, with kids hooking trout in it through the 1950s.

The Press Democrat tried to put an inspirational spin on the delays caused by the earthquake debris, writing it was “fitting because the new would rise phoenix-like from the buried ruins of part of old Santa Rosa.” Here’s a better metaphor: Abuse Mother Nature at your own peril – because the bill always comes due, often in ways no one expects.

One thought on “…AND HOW WE GAINED AN UGLY CITY HALL”