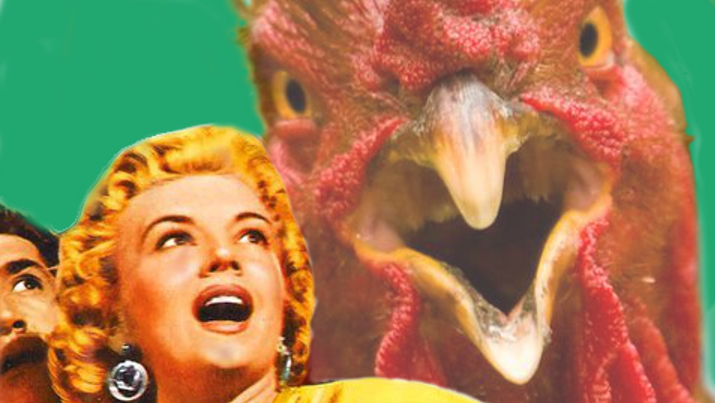 All Bernice wanted was a good night’s sleep. She didn’t mean to throw the town into an existential crisis. At least, I don’t think so.

On July 2, 1951, she went to a City Council meeting. “I am complaining about roosters that wake us up,” she said. “I think we should get rid of these birds.”

It was a shocking proposal. The birds in question were chickens and Bernice Gardner lived in Petaluma, a town which had long shackled itself to the Leghorn and its skill at reliably cranking out lovely white eggs – which sometimes pop out fuzzy baby chicks, hence: Roosters.

“We must consider the poultry business,” Councilman Walter Brown said, adding helpfully “all roosters crow.” Perhaps he was wondering if Mrs. Gardner didn’t understand she was complaining about chickens. In Petaluma.

The acting City Manager pointed out there was no prohibition on keeping animals within city limits and presented a thumbnail history of an earlier tussle over the issue that limited the animal kingdom to dogs and cats. This was useful, as it gave the Council members a moment to recover from shock and gather their political wits about them.

Councilman Norwood suggested they could write an anti-noise ordinance. A zoning ordinance might be the thing, Councilman Shoemaker thought. Norwood added that they could make it a nuisance ordinance. “We would do something about a howling dog. It’s the same thing, only a different noise.”

City attorney Brooks offered his two cents, although I’ll bet he billed the city at a considerably higher rate. He said the Council could write a general ordinance or a specific rooster ordinance – but if roosters were being kept with malicious intent, a special specific ordinance could be enacted. With that said, the council voted to hold the item over for the next meeting.

Note there was no thought of restricting – much less banishing – chickens within city limits.

Bernice and husband Ralph, both in their early sixties, lived in the 600 block of Baker street, a Westside neighborhood off of Bodega Ave. where many homes have big backyards and plenty of room for a hen house. She told the Council, “at 5AM it’s anything but trivial. There are two across the street from my house, and another large one nearby which crows every five seconds. I have called the neighbors at 5AM to complain but nothing has been done about it.”

She seemed to make a valid point but at the next Council meeting, a woman named Clara Perry said she represented the neighbors and they had something to say – and not about chickens, but about Bernice. This was an eccentric thing to complain about, Clara charged, and surely the Council had more serious matters to consider. The record does not reveal whether she was, or was not, in possession of a rooster.

Again punting on a decision, the Council decided Bernice should next visit the Planning Commission. She also needed to file a complaint with the police signed by six other persons. It’s likely they now believed she was an isolated crank – although there was always a risk the rooster fight could turn into a replay of 1948.

That was the year of the petition against “fowls and livestock within the city limits” (Bernice was one of the three ringleaders in that effort). Petaluma was no longer a rural community the petitioners argued, and animals were both a nuisance and health risk, specifically “chicken raising in residential areas [is] an insurmountable source of rat nuisance.” About 300 signed the petition and a draft ordinance was hammered together. At the first Council meeting of 1949 the room was packed with protesters and a counter-petition with 900 signatures was presented. Their lawyer made a 15-point argument against the ordinance; #7 was that seized animals would be denied due process. The Argus-Courier headline the next day was, “Livestock Ordinance Beaten Down by Opposition Barrage.”

Alas for Bernice, her 1951 appearance before the Planning Commission didn’t go so well, either. Commissioners were only willing to discuss future considerations on the “subject of nuisances.” Nor could she muster even six people to sign her noise complaint. All the city had received was a single letter which condemned all “roosters, hens, flies, rats and odors” within the city. It was anonymously signed, “A Petaluma Citizen.”

Petalumans, it seems, were a remarkably tolerant bunch when it came to barnyard noises; a quick search of mid-century newspapers turns up surprisingly few police blotter items. In 1952 a woman on I street called the police over her neighbor’s cow, who “mooed all night and was still making a noise the next day.” A couple of times the Argus-Courier joked that rooster complaints were resolved via a dinner table. In fact, there’s only one other occasion that can be found where a resident thought roostering was serious enough to merit the government’s attention.

The year was 1945, and a woman complained to the City Council that roosters were waking her up each morning at 4:30. At the next Council meeting five of her neighbors showed up to defend the right to crow. “Mostly all the speakers felt the situation could be amicably corrected by the neighborhood itself,” the A-C reported. Note the article implied at least one of them thought the matter couldn’t be settled peaceably.

So here’s the obl. Believe-it-or-Not! reveal: The warring neighborhood in 1945 was Baker street, same as in 1951. One of the neighbors fighting the complaint in 1945 was again Clara Perry, who lived three door away from the woman who was so bothered by the crowing. The woman who said she couldn’t sleep in 1945 was again Bernice Gardner. And Bernice – who apparently couldn’t stand to be around chickens even though she was living in the most chicken-y town in America – knew well what roosters do, having spent about twenty years of her early married life on chicken ranches in Vallejo and Cotati. Familiarity breeds contempt, as they say. In her case, lots.