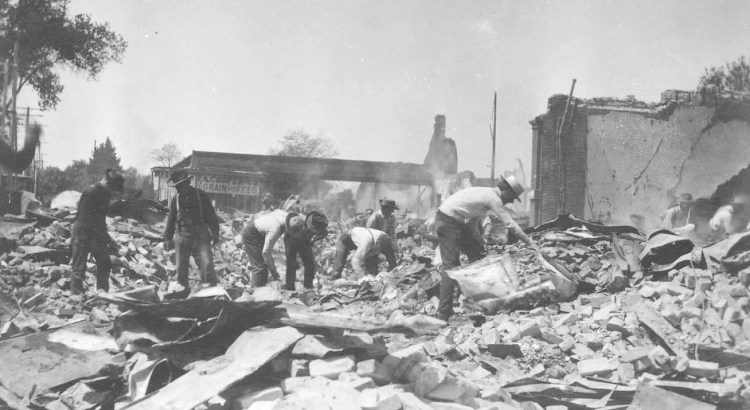 “All of the buildings fell at once; no one first,” a man named Green Thompson told an investigator into the 1906 earthquake in Santa Rosa. He added the dust was so great on Fourth street he couldn’t see.

Yes, the buildings that collapsed downtown were almost all brick, and mostly built 1883-1885 during the town’s first building boom. Yes, unreinforced masonry buildings are not particularly earthquake friendly. But it has always rankled that the official 1908 State Earthquake Commission report put the blame on our ancestors not knowing the basics of building construction:

It’s understandable that too much loam is undesirable (although there’s a 1903 researcher who says up to 10 percent dirt is actually beneficial) but we don’t know what the investigator meant by “considerable”, nor how he learned this. That goes to the heart of the question: before all the buildings fell down, did anyone know the mortar was weak? If it was always crumbly, that would have been apparent soon after the first brick buildings went up in 1883, and surely they would not have continued making the same mistake for another two years.

Nor is this my first beef with the official report; it was superficial and littered with errors, as I’ve mentioned here several times. Besides apparently inverting a couple of digits for the population of the town (6700 instead of 7600) which exaggerated the scope of the death toll, it claimed there were “61 identified dead, with at least a dozen ‘missing’” without explanation even though no missing persons had been mentioned since the weeks immediately after the quake.

I’ve long suspected that the investigator (name unknown) was misled by Santa Rosa boosters who wanted to underplay the scope of the disaster. Details found in the Petaluma Argus rewrote the story significantly; the big takeaway was that the interim newspaper published by Press Democrat editor Ernest Finley didn’t mention there was serious looting and the stench of death lingered over the town for days. Most significant was that neither the investigator nor the PD ever mentioned the massive explosion at the Haven Hardware store, which was so huge it took out one side of its block on Fourth street, killing at least eight. (As it turns out, Haven Hardware was one of two places in town that sold gasoline.)

In this case, I believe the investigator had important information in front of him but did not know what to make of it.

A quarter-century had passed since those bricks were laid, during which there had been a revolution in the building trade. Victorian-American bricklayers, like masons around the world, were still using traditional lime mortar in the early 1880s; like bricks and building stones, it was permeable so an entire wall handled rain (and more importantly, frost) as if it was all the same material. Some of the drawbacks of sand-lime-brick was that it took a long time to fully cure and had to be repointed after 30-50 years. When quick-drying Portland cement came along, builders rushed to add it to their mortar; transcribed below is a little snippet from the 1883 Santa Rosa newspaper showing the contractor and architect arguing over the mixture to use for the foundation of the new courthouse.

We don’t know the exact ratio used by other Santa Rosa builders at that time, but can assume they used a high ratio of lime to concrete, as was common practice. And here’s the other drawback to using the old lime formula – when it’s exposed to high temperatures it bakes, as the carbon dioxide is driven off and it begins to break down into calcium oxide (CaO), or as it’s better known, quicklime.

After firefighters train water on this weakened mortar it reverts to being a putty, with the result being powdery when dry. That seems to match the “easily crumbled to incoherent sand by pressure of the fingers” description in the report. (Disclaimer: I have not checked my theory with a material science expert in Victorian mortar, nor do I know if such a person exists.)

If this is all correct, it rewrites another part of the 1906 Santa Rosa earthquake story – namely, the fire was far more intense than is believed.

Lime-based mortar begins to break down to quicklime at around 850°C (1562°F) which is around 30 percent hotter than an average house fire. But if everything collapsed at once, it had to reach those temperatures after the buildings had fallen – which would mean that much of downtown was an inferno, at least for a short period of time.

That is not at all hard to believe; eyewitnesses including Luther Burbank said the gas was still on, so there would have been hundreds of gas jets feeding the flames. A man who nearly burned to death said the heat was “unbearable” and another witness later wrote, “the heat was overpowering and all that saved the town was the absence of wind.” In his 1908 speech laying the cornerstone for the new courthouse, Herb Slater reminded people what it was like that day:

In another account, Miles Peerman, a former Santa Rosa constable, was pinned down by wreckage at corner of 5th and B streets. “They did their best to dig him out, but the heat of the raging fire became so intense that they could no longer stay by him.” And then there were six known who were completely cremated into “nothing but burnt bones and ashes.”

The last bit of evidence I’ll submit is this: Look at any of the photographs from the following days, including the one below, and you’ll see only piles of scattered bricks – not even small sections of walls fell intact, which suggests the mortar completely failed, either while standing or while on the ground.

This item wouldn’t be complete without its obl. Believe-it-or-Not! coda, but it’s not about Santa Rosa – it concerns the Notre Dame Cathedral catastrophe. Much of that day I spent weepy-eyed and watching the excellent (English language) coverage from France24. To fill airtime they aired snippets from various news items on the Cathedral from earlier years, particularly about the restoration that was underway before the fire.

This brief segment about bad mortar repairs left me shaking. Anyone involved with old house restoration would recognize it as undesirable “tuck-pointing” – modern concrete being used to fill in gaps where old lime mortar has fallen out due to weathering. Because cement mortar is impermeable, water ends up trapped in the adjacent brick or stone which over time starts to crumble away, as seen on the video.

But what was not shown is even scarier. Tuck-pointing is patchwork; the worker never digs out all the old lime mortar before slapping in the new stuff, which means (I assume) that the interior sides of the stone still have soft lime mortar. And if the fires we saw on TV reached those critical temperatures, there is now weakened or even no viable mortar on the scorched cathedral walls – but stuff that’s hard as rock on the outside. And, of course, some of the exterior sides are being pressed inwards by those famous flying buttresses. (UPDATE: The yellow smoke seen during the fire was 210 metric tons of lead cladding vaporizing, which was just a small portion of the entire weight of the roof.)

I pray to the goddesses that some engineer in Paris is thinking about that, or an even greater tragedy may soon follow. 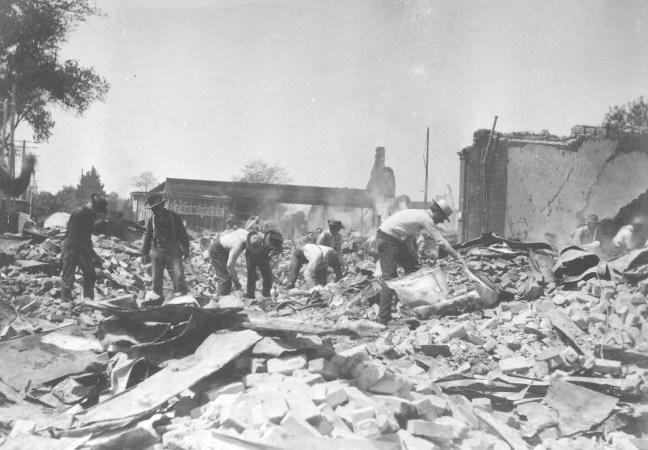 S. Carle spoke in relation to using lime in the rockwork for the foundation of the Court House. He would like one barrel of lime to one barrel of Portland cement and three barrels of sand. The specifications call for one barrel of Portland cement to three of sand, no lime mentioned. He claimed that the use of the amount of lime spoken of will make just as good a job as to have it all cement. Mr. Bennett, who was present stated that the proposition of the contractor would result in doing just as good a job as the other, and that he had drawn the specifications in that way so as to have full control of the material that went into the foundation. A long and desultory debate ensued, and finally the matter was informally referred to Messrs. Morse and Proctor.

A new building material called stone brick, harder than the hardest clay brick, is made from simple mortar, but a scientifically made and perfect mortar; In fact, a hydraulic cement, and the grinding together of lime and sand in a dry state — including, also, some alumina, which is usually present in sand — and the subsequent heating by steam, give the mixture the properties of the burned hydraulic cements at present in use.—Public Opinion.