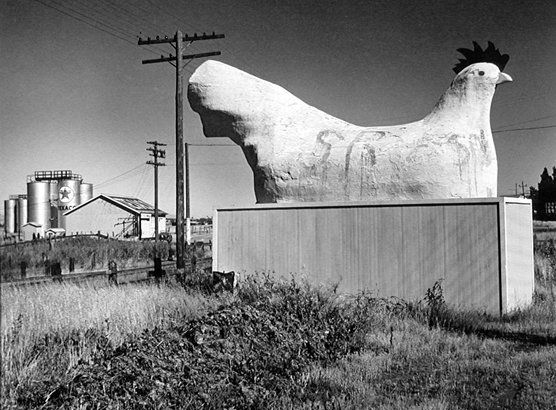 She was a good hen, sitting patiently on her nest for nearly twenty years. Then she loudly blew up.

In the 1920s and 1930s she was Petaluma’s first goodwill ambassador, greeting visitors driving into town from the south.

Her name was Betty.

She was originally part of a float for the very first Egg Day parade in 1918 and made by Albert Welchert, a German carpenter turned chicken rancher. “Mr. Welchert is building the biggest hen that has ever been made,” the Argus-Courier noted. “It will be twelve feet long, ten feet high, five feet across the back and will be sitting on golden eggs.”

There’s no photo of her debut. We first see her in a picture from 1920 when a couple of flappers are dancing on her back for a newsreel movie – quite a change from seven years before, when Petaluma banned “rag” dancing and arrested people for it. (All images shown below.)

The Welcherts moved to Oregon in 1921 and presumably gave the big hen to the Chamber of Commerce, who built a perch for her a mile south of city limits on the old Redwood Highway (roughly where Petaluma Blvd. South meets McNear avenue, close to the Vets Building).

She didn’t have much company out there, except for her noisy neighbor: The Colony Club, about a quarter-mile further down the road. Petaluma’s nightclub!

Bill Soberanes, Argus-Courier’s columnist and “peopleologist” later wrote often about the Club as a place where “Petaluma’s Cafe Society set” dressed up for dinner and dancing. It wasn’t very big – about the size of a modern three-bedroom ranch house. Still, it had a dance floor, and outside it advertised both “DRINKS” and “COLD DRINKS.”

Like other swanky places it often had a floor show. Among the headliners were contortionist Rue Enos (“Making Both Ends Meet”), harmonica virtuoso Ernie Morris (“formerly with the Minevitch Harmonica Rascals”), “tap tumbler” Tommy Konine and song stylist Charlotte Day (“she’s gorgeous to look at”). Should Gentle Reader think I’m cherry-picking the really unusual acts, note that I have avoided descriptions of the ventriloquists and puppeteers.

The joint closed every night at 2AM when the master of ceremonies said, “You don’t have to go home, but you can’t stay here.” That sounds less threatening if it can be imagined said in Garrison Keillor’s Lake Woebegon voice.

Some artistic pioneer happened to notice her big, beautiful white sides were like a blank canvas. And get this: If someone wrote a comment there, officials would eventually paint over it, thus providing a fresh canvas for a response! It was like instant messaging, except not so instant.

In 1934, the Argus-Courier reported the “big hen” had been vandalized by someone “placing obscene language thereon… This is the second time within a year that obscene language has been painted on the ‘big hen.'”

Not to worry: The paper also stated, “Officers at the Chamber of Commerce have information that will lead to the arrest and conviction of the offenders, it is said.” Uh, nope.

Apparently this cat-and-mouse game with the vandals went on for years. The next evidence was shocking: Betty was now disfigured! A 1936 image shows the remains of the latest grafitti, but also now gone was her lovely wattle; no more the red mask around the eyes, so typical of the Petaluma’s noble leghorn. Both were clearly visible in the 1920 picture.

It gets worse. An undated photo (1937?) shows Betty with eyelashes! What next, lipstick?

“A blast that shook the outskirts of Petaluma on Thursday night and blew its ‘advertising chicken’ to smithereens,” the Petaluma paper announced. The Colony Club shook like there was an earthquake. A man who lived about a mile away said “it seemed as though the walls would fall in.” The explosion “scared the wits out of passing motorists,” the Press Democrat observed, and plaster chicken nuggets were “littering the highway with chunks of stucco, twisted wire and sticks.”

Petaluma police and the Highway Patrol rushed to the scene. No evidence was found, except for a piece of a dynamite fuse. An investigation began immediately, and the result was possibly my favorite newspaper headline of all time:

“Both Kelly and I are of the opinion that Tam students are the logical ones to be involved,” said Dutch. “Tam” meant students of Tamalpais high school, whose football team was about to play against Petaluma. The Tam principal told the Argus-Courier a “thorough investigation of all Tamalpais students revealed that none were involved.”

The other suspects were from Santa Rosa Junior College. Kelly said Santa Rosa students were spotted in Kentfield around 10PM, where they were trying to sabotage a pre-game bonfire before a football game against Marin Junior College. That gave them time to reach the chicken. But Floyd P. Bailey, president of SRJC “didn’t believe any [investigation] was necessary…Santa Rosa students were too busy at their own bonfire and rally Thursday night to be bothered with any trips or blastings.”

Whodunnit remained a mystery. An A-C article years later mentioned in passing that she was bombed because of the upcoming “Santa Rosa-Petaluma annual football classic.” No one was charged.

The crime was finally solved via an anonymous confession which appeared in Lee Torliatt’s Golden Memories of the Redwood Empire (the most enjoyable book about Sonoma county history, IMHO):

So there you go: It was the dirty rotten sneaks from Santa Rosa – as if there really was any doubt.

There’s an epilogue to our tragedy: Some time later, Betty’s spot was taken by “Chantacline.” This chicken was nearly as old as Betty and stood for many years between the Petaluma train depot and Hotel Petaluma, which was her owner. Chantacline was smaller and more delicate, supported with guidewires. There would be no dancing on the back of this hen, no sir.

Like her predecessor, Chantacline was repeatedly vandalized. The worst happened in 1945, just a day after her most recent repainting had finished. Both legs, tail and head were broken and her wires were cut. Since Chantacline belonged to the Hotel Petaluma and not the town’s Chamber, hotel manager Harold Eckart was determined to Sherlock out the perps. He succeeded; five Santa Rosa High School students were taken into custody and ordered to pay $500 in damages.

All of this is now gone, of course. There are no giant statues of plaster poultry on the old route, and Colony Club burned down in 1955 (another place was built north of Petaluma). With the heyday of Betty and the nightclub now about eight decades in the rearview mirror, there’s few still around to be nostalgic about their passing. Even in the 1970s, details about the Club were Trivial Pursuit-type items in Bill Soberanes’ columns.

Places like that little stretch of road are suspended in a kind of twilight zone, reserved for locations which were landmarks even though nothing historical happened and no one noteworthy setup home or business. Yet for a generation or more, there was probably no patch of Sonoma county better known.

It was where stylish couples and flirty singles danced to the tunes of Kim Kimmel on the Hammond organ, the women in their rayon dresses from Carithers and men in their worsted tex sport coats bought at the Penny’s.

For those traveling through or returning home from San Francisco, there was also that whimsical super-sized chicken announcing the egg basket of the world was up ahead, just around the curve. And sometimes there was a bonus message concerning the pitiable intelligence or lack of personal hygiene possessed by some local football team, which was always quite informative.