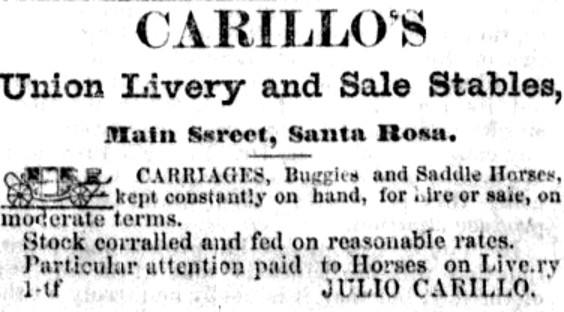 Writing history’s easy if you do the homework and know the facts; what’s hard is getting across the flavor of the time. Even a town like Santa Rosa is a pretty alien place when you reach back to its earliest days, 160+ years ago, because glimpses of what it was like rarely appeared in the local newspapers – why would subscribers want to read about what they saw every day?

While researching the next item to appear, I stumbled across a little poem in a Civil War-era Santa Rosa paper which was supposedly written in 1856. As poetry it’s sheer doggerel (as the editor admits) but it’s not without its charms.

The poet looks back at the old days – meaning a couple of years prior – when Santa Rosa was little more than a saloon, a store, and Julio Carrillo’s corral. Now there were three or four stores, a stable, a hotel, flour mill and a church. Why, there was even a building with two stories! This had “made Santa Rosa a —— of a place,” but it’s left to Gentle Reader to decide whether the author’s missing word was meant to salute or spit upon the changes wrought by progress.

The poem might have been written later or earlier than 1856, although it really doesn’t matter. The last line is a pitch to elect “Dr. Johnson and me,” which is probably a reference to J. Neely Johnson (elected governor in 1855) as no one named Johnson was running for a Sonoma county office in that time period.

(ABOVE: Advertisement from the 1857 Sonoma County Journal)

LOCAL VERSES. – The following doggerel was picked up in the streets of Santa Rosa in 1856. The author of the lines is not known, but suspicion rests upon one “Horace,’ of the olden time:

Not far from the ford at the forks of the creek,
between where Jack Stiles and Peters made brick,
Where Colgan kept bar in a temperance Hall,
Where the small-pox pitched into J. W. Ball—-
Stands a neat little town that was located near
The house of a Spaniard, named Julio Carrillo.

Two years ago you could see nothing more
Where that little town stands, than a tavern and store,
Where they retailed their whiskey at two bits a pull,
And when low, with creek water they kept their casks full;
Where they marked up their goods, and complained of the times,
When they’d get the last red of their customer’s dimes.

But a short time ago, I recollect well,
There were big droves of cattle in Julio’s corral,
And near where that barber has stuck up his pole
Once a horse bucked me head over heels in a hole;
I disliked that arrangement, and whom would it please?
I asked, as I sat with my hands on my knees.

Those times, we wouid work all the week, hauling rails,
And Sundays, were as proud as a dog with 2 tails!
We’d get up our ponies and get a gal each
To ride with to meeting, to hear Riley preach;
Then we’d hump ourselves home and get us some grub,
Then each pop a dirty shirt into a tub;
We’d give it a twist, a squeeze, and a rinse,
Then hang it out doors to dry on the fence;
The dog would soon carry it under the floor,
And we’d sit down and cuss, for we had but one more.

But 2 or 3 years have wrought a great change,
Have swept off the cattle, have fenced up the range,
Built a house for the archives brought over the hills,
And Cameron’s, the Scotchman’s and Leffingwell’s mills;

Made men out of monkeys, and princes of goats,
Old cows of young heifers and bacon of shoats;
Have spread Spanish needles all over the ground,
And brought down potatoes to 2 cents a pound;
Put the deuce in the ladies and mud in the lanes,
And married maids to unfortunate swains;
Drawn the first wrinkle on many a face,
And made Santa Rosa a —— of a place.

We’ve some of the fastest get-ups of the age,
There’s Doc. Boyce’s mare and Chil. Richardson’s stage;
Fast horses, fast youths, with their Jacks, Kings and Queens,
And gaIs who are mas before reaching their teens.

You know Charley Smith (the first of the name)
Who built the log house for the set-em-up game,
Though somewhat religious he couldn’t forbear
To furnish a chance for a strike and a spare;
At daylight, at midnight, at sunset, at noon,
You could hear the pins fall at this bowling saloon,
While their incessant lumbering endangered the quiet
Of a most worthy citizen—Thomas H. Pyatt.

There’s Jim Williamson’s stable, Eureka Hotel,
The house kept by Mat and old Kitty Purcell,
The 2 story hall for the Mason and Son,
Know Nothing, Odd Fellow, and Thousand and One.

Your taverns, your dead falls, your 3 or 4 stores,
And then there are those fruit stands, Billy Gray’s and Mam More’s,
Will make you a city with council and seal
If you’ll put Dr. Johnson and me at the wheel.

One thought on “A SHORT TIME AGO I RECOLLECT WELL”