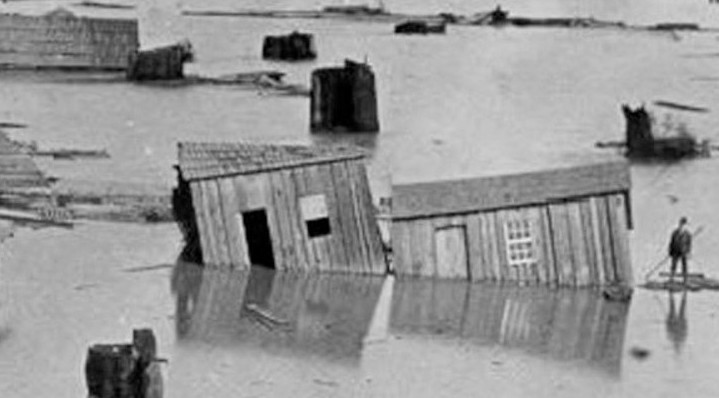 We’ve certainly gotten a lot of rain this year. Now imagine getting even more than this during just 25 days.

The Press Democrat recently (March 2, 2017) offered an article, “Santa Rosa on its way to wettest year on record.” As of that date, according to the “Press Democrat Data Center,” the city had recorded 52.07 inches of rain, “more than all other years save for two since 1904 when record keeping began.” The PD also claimed the wettest rain year was “1982-83, when 55.68 inches fell in the city.” (UPDATE: On April 6 the paper declared an all-time record was set with 55.75 inches.)

Well, no. For starters, weather records didn’t suddenly begin in 1904; the old county histories list rainfall totals going back to 1853-54, and the PD used to print annual tables before the turn of the last century. Although there are a few years around 1920 where summaries aren’t reliable, we’ve got a pretty good picture going back over 160 years. Going by all that data, 1889-1890 was the wettest rain year with 56.06 inches measured.

I posted a correction to their article on my OldSantaRosa Facebook page and thought it was a settled matter – until I came across an article from the January 2013 Scientific American. “California Megaflood: Lessons from a Forgotten Catastrophe.” Described there is the winter of 1861-62, when there was so much rain that the Central Valley became a giant lake up to 30 feet deep. Napa was flooded to four feet and Sacramento was under ten feet of water, remaining accessible only by boats for months. It was a disaster hard to imagine today.

Lucky Sonoma County! According to the histories, that rain year we received 46 inches – higher than our average of about 30 inches, but certainly manageable. But just for fun, I decided to see what the Santa Rosa newspaper had to say at the time.

The items from the 1862 Sonoma County Democrat, transcribed below, documented Santa Rosa receiving 58 3/8 inches of rain over six weeks – more than the all-time record for entire season. And there were two snowstorms, with the last one leaving more than an inch in the town.

“The roads everywhere are almost impassable, and wrecks of buggies and stages are common,” reported the paper after New Years’ – and it was about to get worse. On January 9 “the town was completely submerged – the water being in several of the streets about fifteen inches deep…Almost every bridge in the county has been carried off, and for four days we were entirely deprived of communication with any section.” Again Santa Rosa Creek flooded the town on January 21 and the town was cut off from the outside. “As we write our town is just overflowed from the creek, the water reaching to our office door – a distance of quite two hundred yards. Rain has fallen heavily all day, accompanied toward night with thunder and lightning! What a time!”

All together it rained for 25 days over six weeks. No one died (as far as we know) but animals drowned and “a few houses in various parts of the county… [lost] their perpendicular ‘posish.’” It was such a mess that a wagon with a team of horses took sixteen days to travel from Petaluma to Santa Rosa.

Why did the old county histories coverup this historic flood? The reported 46 inches for that season first appeared in Robert A. Thompson’s 1877 “Historical and descriptive sketch of Sonoma county, California,” and his numbers were copied in later histories. Thompson’s booklet – which was unabashedly a promotional item to encourage people to move here – did mention Santa Rosa plain lightly flooded sometimes. But to reveal only fifteen years before there was a disaster that killed livestock and destroyed property might understandably make a few potential property buyers skittish.

So how much total rain did Santa Rosa received in 1861-62? Alas, the local newspapers never reported a total, as far as I can tell – probably also to not scare away newcomers. But we can make a guess: Normally, roughly 45 percent of our annual rainfall happens during that window, and it otherwise was an exceptionally wet year overall.

If the Santa Rosa newspaper was accurate in measuring over 58 inches during that time, it could mean the rainfall total for 1861-62 was over 130 inches. That may seem crazy, but it’s in line with other parts of the state mentioned in Scientific American where they experienced four times normal precipitation that year.

Even if you shave those numbers back, our ancestors still received around twice as much rain as we have (so far) in 2016-2017. Could we cope with a disaster of that magnitude? I don’t want to think about that – and unfortunately, I doubt our public agencies are spending any time thinking about it either. And did I mention that a flood of that magnitude apparently happens less than every 200 years?

The Weather and the Roads. — During the last week much rain has fallen. Some of the rain-storms were accompanied by violent wind. No serious damage has been done, and the creeks generally have graciously kept within (under the circumstances,) reasonable boundaries. The roads everywhere are almost impassable, and wrecks of buggies and stages are common. Daily stages have become per force semiweekly, and daily mails ditto. But the heavy rains of the season, we doubt not, are now over.

Wintry. — On Saturday night last the good folks of Santa Rosa and vicinity were visited by quite a snow storm. It lasted about two hours, and on Sunday morning the hills surrounding the town presented a very beautiful appearance — the tops being clad in white.

A day or two previous, we were visited by a thunder-storm, which is also very unusual in this locality. We have heard of a very pleasing incident which occurred on that day, and which we think is worthy a place in our columns. Little Edgar C., about 4 years old, was playing in his father’s yard when the first clap of thunder came. It was probably the first he had ever heard, and he ran immediately in the house to his father and asked, —“Pa, did you hear the clouds bursting?” Shortly after, when the thunder had ceased, he went to the door and observing the clouds beginning to disperse, he turned to his mother and remarked, —“ Ma, it is not going to rain—God was only fooling you.”

The Storm in Sonoma County. – During Wednesday and Thursday of last week, the rain came down in torrents, causing a great flood, which has probably done more damage than even the great flood of ’52. From every section of the State we have news of the most terrible results. In Sonoma county, though comparatively less property has been destroyed than in other portions of the State, yet we, too, have suffered. On Thursday night, about midnight, the Santa Rosa creek began to overrun its banks, and by two o’clock the town was completely submerged – the water being in several of the streets about fifteen inches deep, and flooding several buildings. It remained in this condition until about daylight, when it commenced to recede, and by 10 o’clock the streets were free of water. Our greatest sufferers this time were persons residing immediately on the banks of the creek. Mr. Wm. H. Crowell, Deputy County Clerk, sustained heavy damage by the caving and washing away of a large portion of his land, together with fences, etc.; he estimates his loss at $1,500. Mr. E. D. Colgan of the Santa Rosa House, was damaged in the neighborhood of $1,000, by loss of stock, land, fences, and a beautifully cultivated garden, that was entirely covered with sand from the creek, and all the plants destroyed. Mr. John Ingram suffered a great deal, from loss of fences and damage to his orchard. These are the principal sufferers that we have heard of, though all persons residing along the creek were damaged to some extent by loss of fences and stock. The Santa Rosa bridge still holds on, notwithstanding the foundation at each end is partly washed away. Almost every bridge in the county has been carried off, and for four days we were entirely deprived of communication with any section. We are informed that the saw-mill of Messrs. Caldwell, Levy & Witty, at the month of “the canon,” on Russian River was swept away, and a great amount of damage done all along the banks of the river.

At Sonoma, we learn the old courthouse, an adobe building, settled down and fell to pieces. The upper story of the building was occupied by the Odd Fellows and Sons of Temperance, as a lodge room, and the ground floor by Mr. N. Kavanaugh, as a saloon.

The Great Storm and Freshet Rain has fallen hereabouts without material cessation, since the last issue of the Democrat — the severest storm and fresh, et ever experienced in this part of the country, since its settlement, still continues without any sign of abatement. The sensitive streams rise and fall with the capricious falling of the rain. The banks of Santa Rosa creek have been washed away to that degree, that the capacity of its bed is nearly doubled. Wo do not learn of much damage other than all may imagine in the destruction of such ordinary kind of property as fences, bridges and cattle, beyond the carrying away of the dwelling of ’Squire Spencer, situated upon a slough near Healdsburg, and the undermining of a few houses in various parts of the county, causing them to lose their perpendicular “posish.” Santa Rosa bridge was doubtless prevented from floating off, from the fact of its being secured by ropes. The roads are impassable, and not a few of our citizens have experienced some inconvenience from a want of provisions and other necessaries, as well as the utter absence of postal accommodations, in consequence. No mails have been received since Thursday of last week, no stage has reached here from Petaluma, since then, and but one from Sonoma, which got through on Sunday, bringing San Francisco papers of the 18th — our latest intelligence from the outside world. A loaded team bound for Ukiah, reached this place the other day, from Petaluma, having been sixteen days on the road, a distance of as many miles. It resumed its course, but only got a mile and a half from town, when it was obliged to “lay over.” As we write (Tuesday evening.) our town is just overflowed from the creek, the water reaching to our office door – a distance of quite two hundred yards. Rain has fallen heavily all day, accompanied toward night wit – thunder and lightning! What a time!

Snow.—The second snow storm of the remarkable season, took place on Tuesday night, when it fell to the depth of quite an inch. So seldom does snow visit our inhabitants, that the oldest of them cannot remember that the valley has been thus visited before since its settlement.

The Weather, etc. — since the heavy rain of Sunday, the weather has been such that our farmers have been enabled to re-commence plowing. They wisely exert themselves to the utmost to put in as large crops as they possibly can. Roads are improving every day.