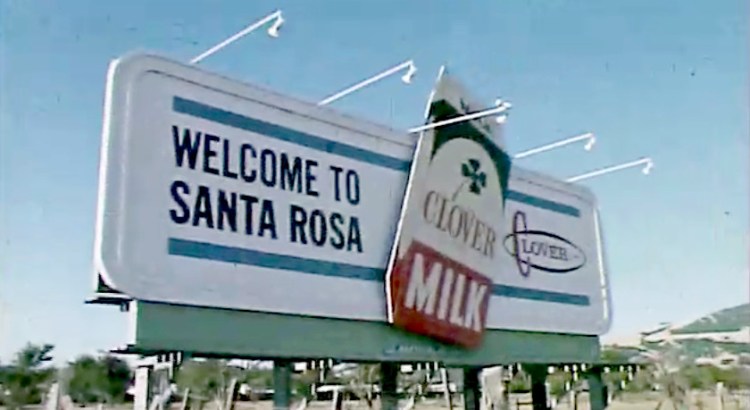 Want to remember (or discover) what Sonoma County looked like in the 1960s? You’re in luck; there’s an online archive of documentaries and news footage shot in that decade.

Sadly, it’s hard to find unless you know where to look – since this material is not available on YouTube, Google does not list any of it in video search results, even if the exact title is entered. Overall there are thousands of hours in those archives and they are a treasure for anyone interested in what happened in Northern California in the latter part of the Twentieth Century. Here are discussed only those most relevant to Sonoma County, along with a bonus section looking at other obscure – and sometimes bizarre – historical videos per our corner of the woods.

The videos are part of the San Francisco Bay Area Television Archive, which sweeps together decades of leavings from major Bay Area TV broadcasters. Maintained by San Francisco State University, the older stuff offers a glimpse of a time we’ll never see again – and by that I mean an era when local stations produced educational programs to show they were operating in the pubic’s interest, an FCC requirement for having a commercial license. These programs usually aired during the off-off-hours on Sundays and were produced on a zero budget except for film and a little staff/studio time. Quality varies greatly, as one might expect; the footage is sometimes puzzling or as awful as an unedited home movie, but there are also treasures such as the 1953 interview with Frank Lloyd Wright, where he talks for half an hour about architecture and his proposed design for the “Southern Crossing” (a companion to the Bay Bridge which was never built).

There are nine videos in the archive related to Sonoma County. Here are summaries and links to most of them:

PORTRAIT OF PLEASURE (1963) is a half-hour travelogue on Sonoma County. Like most of these amateurish documentaries, the script doesn’t add much and is sometimes misleading or outright wrong – apparently Burbank’s home and gardens are somewhere near Bodega. But, hey, we’re here for the pictures, right? Highlights are the aerial shots near the beginning, scenes of downtown Sebastopol and views of vintage (not then!) cars on Hwy. 101. It was county fair season so there’s a long segment which won’t be very interesting unless there’s someone you know slurping ice cream or watching the cattle judging. Unfortunately, that time wasted on boilerplate footage of carnival rides cuts into coverage of Santa Rosa, which is limited to a few downtown scenes. The streets are surprisingly empty; the only person clearly seen is on Fourth Street – and surprise, it’s a cop writing a parking ticket. Was ever thus.

LUTHER BURBANK: A GARDENER OF EDEN (1967) is mostly a generic Burbank bio but it contains some footage I have never seen elsewhere, including film taken during his funeral. Other highlights include a few views of a Rose Parade c. 1920 and a two minute interview with Judge Hilliard Comstock that begins at the 13:30 mark. Hilliard reminisces about working for him as a teenager and the time Burbank scolded him for eating on the job.

THE STORY OF THE GRAPE (1962) covers that year’s harvest and crush in the manner of an industrial video along with some sketchy history of the Buena Vista winery. The best parts are the many aerial views of Sonoma Valley and a full segment on the 16th Valley of the Moon Vintage Festival, including the children’s parade. There are some nice shots of the Sonoma Plaza and surrounding streets during the festival.

EARTHQUAKE IN SANTA ROSA (1969) A ten minute news segment from KPIX on the aftermath of the 1969 earthquake. Includes a short press conference by Police Chief Melvin (Dutch) Flohr, images of downtown and residential damage and the cleanup at the Fourth street Safeway.

Other material in the archive includes an interview with a PG&E spokesman on their intent to build a nuclear power plant at Bodega Head (1963) and a story on Bobby Kennedy visiting a school on the Kashia Reservation (1968). There is also a Jack London documentary which is too dim to watch and has a particularly weak script.

These videos either were made before 1960 or come from sources other than the Bay Area Television Archive. Some of these I have found over the years, lost, then found again, so it saves me grief to offer them all in one place.

THE INNOCENT FAIR is footage from the Panama-Pacific International Exposition of 1915. The film has a mysterious past; it was discovered at a Marin junk shop in 1961 and aired with narration the following year on KPIX. There are several copies floating about the Internet, but this one is the best quality, even with the station logo in the corner. Skip to 13:30 for the shots of Burbank, Edison and Ford together.

A VISIT WITH LUTHER BURBANK, THE GREAT AMERICAN NATURALIST (1917) is a short produced for the Ford Educational Weekly, a newsreel series the Ford Motor Company distributed free to nickelodeons and movie houses. Seen by an estimated 4-5 million people every week, these productions made the auto company the world’s largest film distributor at the time. A much higher quality copy of this is available for purchase via shutterstock but lacks the title cards revealing its origin.

THE LARGEST OMELET IN THE WORLD (1930) According to the Argus-Courier of May 3, 1930, “eleven Petaluma girls left here early Saturday morning for San Francisco to assist in the ceremonies of preparing the world’s largest omelet, which was cooked in a 16-foot frying pan…those who made the trip were Vivian Foster, Hazel White, Janet Perry, Hazel McDonald, Mildred Keller, Lola Hames, Jeane Sweeney, Helen Kenneally, Nettie Rorden, Marie Hames and Dorothy Swan” (spellings as printed).  Why they had to do calisthenics in the frying pan is anybody’s guess.

THE LIBRARY STORY (1964?) The old Carnegie library was condemned in 1960 and Santa Rosa was in no hurry to pay for a new one, so for years the town’s main library was on the second story above a saloon and a beauty shop on Exchange Avenue. This video, produced by the Friends of the Santa Rosa Public Library, was an effort to shame the town into building a replacement so the children didn’t have to hustle past the “Bambi Room” cocktail lounge to do their homework. It worked; voters approved a 1964 bond and the new main library building was opened in February, 1967. Thanks to architectural photographer Darren Bradley for an interesting blog post on this history and a fine profile of the current building.

????? (early 1960s?) This was apparently raw footage for an industrial video or commercial promoting the Italian Swiss Colony winery, but it’s such a bizarre 55 minutes of random junk I would love to slip it to conspiracy theorists and watch them spin their wheels. Why all the ominous views of the deep shadows in the redwoods at Armstrong Grove? Why shots of highway 101 south of Petaluma followed by views of empty beaches? Why do the people in the tasting room scenes seemingly not know how to dress themselves – and why do they never swallow the wine they eagerly tipple? Why keep coming back to the ladies making straw chianti bottles? The film goes black for three minutes and when it returns…hand puppets!! There is a scene in a puppet store and another at the side of a puppet swimming pool. The puppets appear to be arguing. One sits in a puppet chair and dies, or at least collapses. The footage immediately cuts to a real swimming pool, as the camera pans over to show barrels of (poisonous!) chlorine stacked at poolside. This. Explains. Everything. 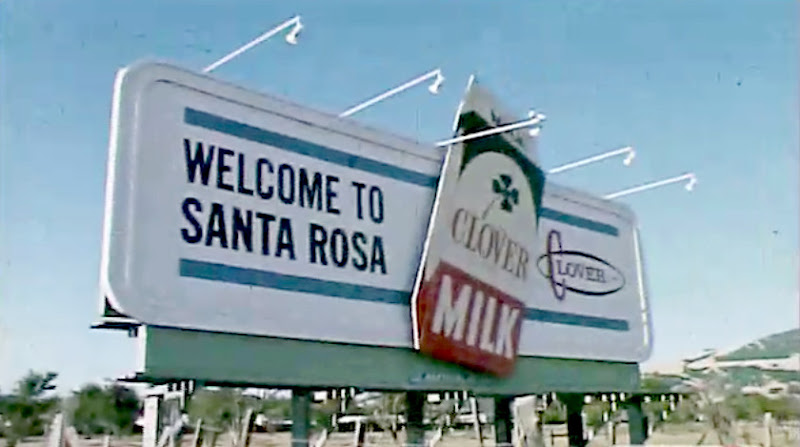