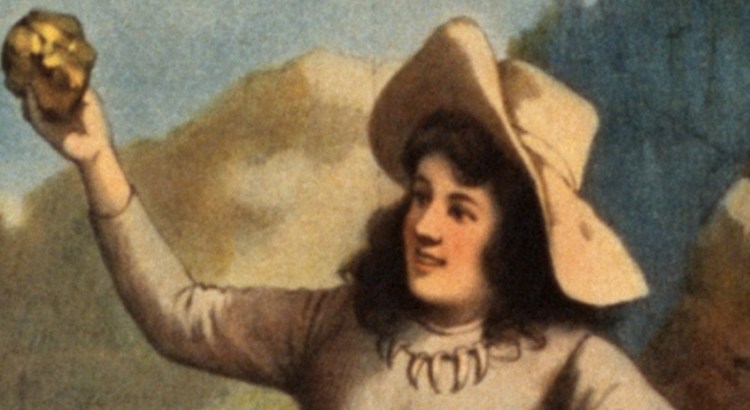 Think those grizzly old Klondike prospectors had it tough? Try panning for gold in -30° temperatures while wearing a dress.

In February 1898, Minnie Stansbury and husband Warren left Santa Rosa bound for the goldfields of the Yukon. Both town papers offered little items about local men when they were leaving for Alaska but as the first woman, Minnie was a novelty and the Daily Republican sent a reporter to interview her. Unfortunately, the result was a fashion piece about what the well-dressed woman was wearing in subzero temperatures. “A figure in fur” was the headline, “gowns of blanket cloth and robes of fur.” 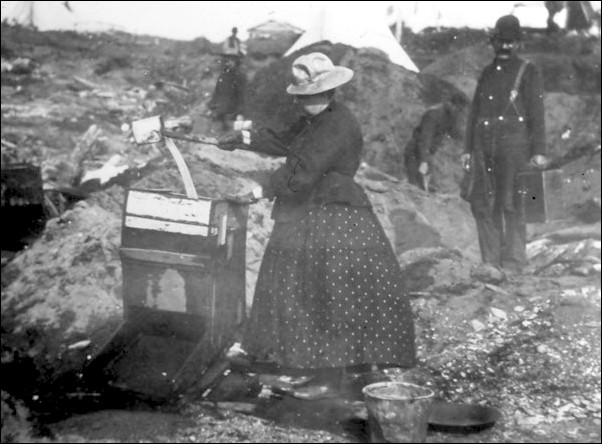 Minnie modeled her arctic attire, complete with her “blanket cloth dress with bloomers of the same material.” Her fur coat fell only to the bottom of her skirt. That was not unusual; while looking for images of women there I was surprised not to find a single photo of a woman in trousers – it was always a heavy skirt and usually a coat with a cinched waist. Given the dangerously low temperatures, freezing winds and their required constant physical labor it seems completely impractical.

It was even more of a surprise for me to discover women prospectors and entrepreneurs had a significant presence in the Klondike Gold Rush. For more information the National Park Service has a good overview with profiles of some of the more famous women, but my highest recommendation is a thesis by Alaska historian Sara Bornstein, which is captivating reading and offers a bibliography for those seeking a deeper dive.

While Minnie was the first, she wasn’t the only woman from Santa Rosa for very long; six months later, Virgil Moore returned to the Klondike with his wife, Ada, along with their two young daughters. Moore – called “Santa Rosa’s poet-journalist” by the Press Democrat – will have his own profile here someday, and here’s a spoiler alert: Some twenty years in the future he would become the manager of a plantation while his wife (real given name, “Allibelle”) would claim to be a professional astrologer.

Minnie wrote to her parents, but either they didn’t share the complete letters with the newspapers or the editors considered them only worth thumbnails. “Mr, and Mrs. J. D. Cooper received a very interesting letter Monday from their daughter Mrs. Warren Stansbury from Skagway. She writes that they are both well and gives an account of their experience while sleighing over the snow.” Another time: “Mrs. Stansbury writes that there is a great deal of sickness at Skagway, and that a number of people are dying.” That seems pretty newsworthy to me.

One letter which was summarized at length described her making a pet out a month-old bear cub after a hunt which killed three bears. She further described “Swiftwater Bill” passing by with forty dogs pulling sleds carrying 25 “girls.” She later heard that farther down the trail “they all went under the ice and had to be fished out.”

Minnie (her birth name was actually Myrtle) and Warren stayed in Alaska nearly 2½ years and returned to Santa Rosa in July, 1900, sans pet bear. Warren worked at his father-in-law’s grocery store at the corner of B and Third streets for a couple of years before growing restless. He ran an advert seeking partnership for Kern county oil speculation, then both of them were off to Idaho and Goldfield, Nevada to continue mining. They settled down, finally, in the Los Angeles area around 1917, where they rented out rooms in their house. Minnie died in 1934 a day short of her 65th birthday. They had no children.

She obviously didn’t leave much of a fingerprint on the pages of Santa Rosa’s history, but she deserves a nod for having done this mad thing of tackling the arctic in winter with her blanket bloomers. She was 28 years old and like other local prospective prospectors, all she or Warren knew about mining for gold near the Arctic Circle was what they had read in newspapers and magazines, most of which was colorful fiction. Those articles either tilted towards describing it as a get-rich-quick opportunity while having a ripping good adventure — or a fool’s quest which would probably end in starvation and/or frozen death. “I know I will have to endure great hardships but I guess I am equal to the occasion,” she told the Republican with a laugh.

Hers is also a story of lost opportunity. While most correspondence from miners were little more than, “hi, mom, I’m fine” postcards, Minnie apparently wrote full letters, and of course, from a woman’s unique perspective. There was probably a great deal more interesting written about incidents like the sleighing and dying and sleds filled with girls falling through the ice – hopefully someone in the Cooper family has them and will donate them to the library. 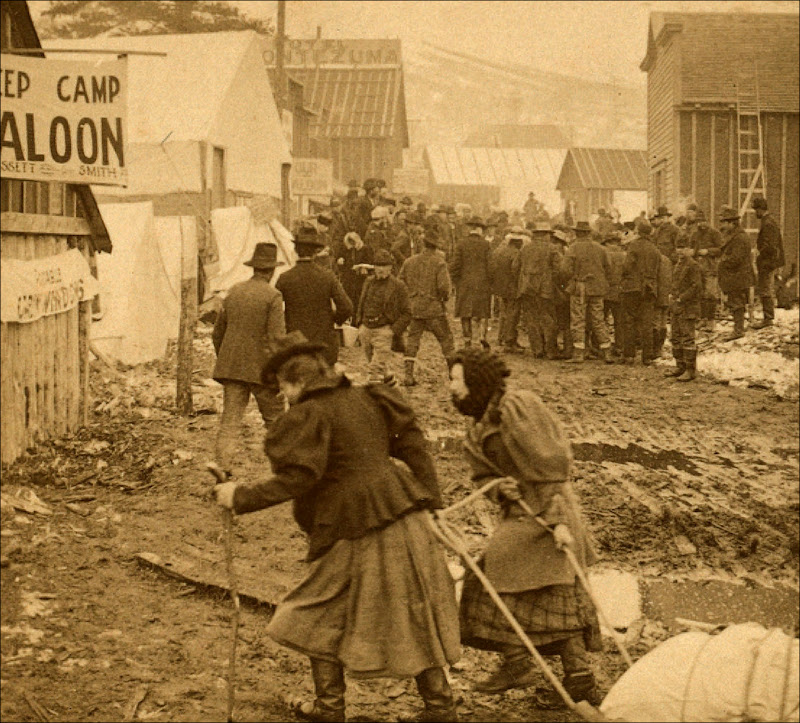 “A FIGURE IN FUR.”
WHAT MRS. STANSBURY WILL WEAR IN ALASKA.
Everything Ready For the Trip to the Gold Fields–Gowns of Blanket Cloth and Robes of Fur.

On Wednesday a REPUBLICAN reporter called at the home of Mr. and Mrs. W. N. Stansbury who expect to leave here February 2d for the gold fields of Stewart river, Alaska. For weeks past Mrs. Stansbury has been busy with needle and thread making garments that will keep out the cold when the frigid arctic region is reached, but the task is completed at last and all is ready for the start.

Mrs. Stansbury’s clothing will consist of blanket cloth dress with bloomers of the same material. The skirts are short so as not to interfere with walking. An immense fur cloak reaching to the bottom of the skirt and with a very high collar looks warm enough to keep out Jack Frost with the thermometer at 100 below.

A blanket cloth cap which can be drawn down over the face, completely covering the head with the exception of the eyes and mouth, is another important article. Over this goes a heavy fur hood which can be drawn closely about the neck and face, so that, with snow glasses over the eyes, the only portion of the face exposed is the mouth. Felt-lined snow boots, fur mitts and heavy fur leggings complete Mrs. Stansbury’s costume.

In order that the reporter might see what an Alaskan woman looked like en costume and in real life, Mrs. Stansbury donned these various garments. The effect was startling. As the garments were donned one by one the woman disappeared and in her place there stood a “figure in fur.” Mrs. Stansbury’s costume is certainly an admirable one. Mr. Stansbury’s outfit is not yet complete though Mrs. Stansbury has made him a great fur coat, cap and hood somewhat similar to her own.

When asked if she entertained any fears concerning her approaching trip over the snow covered hills of Alaska, Mrs. Stansbury laughed and replied that she did not. “I know I will have to endure great hardships but I guess I am equal to the occasion,” she said.

Mr. and Mrs. Stansbury, accompanied by Stanley Myers, expect to leave Skaguay for Stuart river via the White pass some time in February. They will take along supplies sufficient to last one year and Mr. Stansbury stated that he thought his expenses would be about $1,000.

A letter bristling with interesting details and humorous incidents was received here on Wednesday by Mr. and Mrs. J. M. Cooper from their daughter, Mrs. W. M. Stansbury, from Lake Tagish, Alaska.

Mrs. Stansbury tells of a trip her husband and herself and Stanley Myers made on one of the lakes. She says it was very enjoyable, and was just like riding on an electric car.

The letter states that the ice was beginning to thaw on May 16, the day on which the letter was written, but it would be about the latter end of the month before it hreaks much.

The Stansbury’s were near Carriboo island in May and all around them was a city of tents.

The writer speaks of a bear hunt they had in which three bears were killed. Mrs. Stansbury has a pet in the shape of a one month old bear cub which she proposes to bring up, and in the event of her husband and herself coming back to Santa Rosa next spring, she proposes that the cub shall accompany them.

During May Mrs. Stansbury says the thermometer was at summer heat and everything was quite pleasant. She says she only walked ten miles out of the ninety traversed by the party on the trail.

The day before the letter was posted, Mrs. Stansbury says, the somewhat renowned “Swiftwater Bill” passed by their tents with numerous sledges and forty dogs, In his retinue of followers were twenty-five girls. She says they were informed soon after the passing of the party that they all went under the ice and had to be fished out. The many friends of Mr. and Mrs. Stansbury here will be pleased to know that they are so well.

Mr. and Mrs. Stansbury are located about forty miles above Dawson City. The letters are bright and cheery and state that they are well pleased with the country.

The writer says they have made up their minds to stay another year in the Klondike regions. She says they have cleaned up the gold they washed out last year with satisfactory results, having made a nice little stake. ..

On Saturday morning Mr. and Mrs. Warren Stansbury arrived at home in the City of Roses after an absence of two years and a half in Dawson City and vicinity where they have been busily engaged in mining. Their friends are very glad to see them. They are at the residence of Mrs. Stansbury’s parents, Mr. and Mrs. John Cooper on King street. They left Dawson on June 7.

They have brought home with them in addition to some dust and nuggets a collection of valuable curios. On the whole they enjoyed life in the Klondike despite the cold weather and other experiences.

Dawson City now has a population of about five thousand people and while many have gone to Nome there are others who are taking their place. A short time before they left Dawson City Mr. and Mrs. Stansbury saw John Brophy and Roscoe Donahue of this city, both of whom are working on one of the El Dorado claims. Mr. Brophy’s smile is just as broad as ever.

Mr. Stansbury’s health has much improved and both he and his wife are looking very well. They intend to settle down in California again.

One thought on “MINNIE OF THE YUKON”