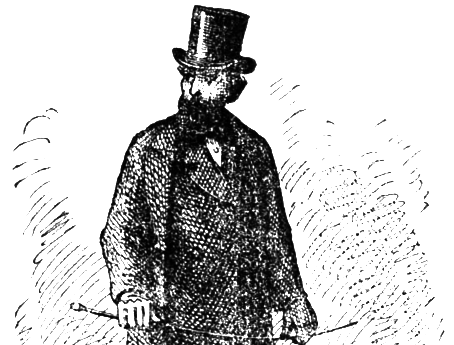 Gotta love Santa Rosa; just a single downtown street is named after someone, and that person was a criminal. 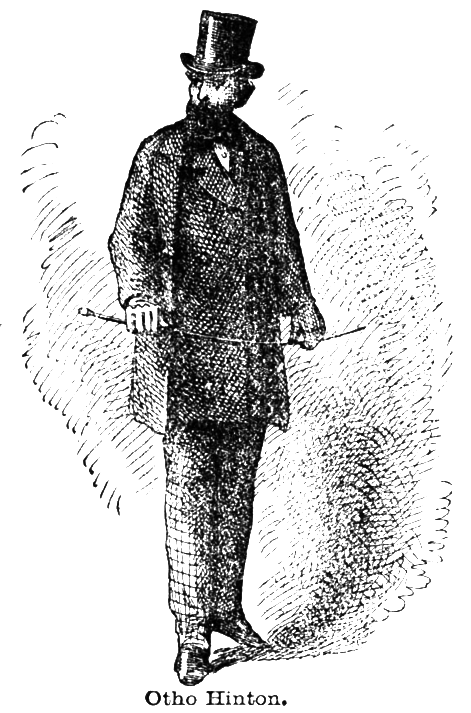 (RIGHT: Engraving of Otho Hinton from the 1876 book, “Guarding the Mails” – see sidebar in part two. It is doubtful this artist ever saw Hinton, whose crimes were committed more than a quarter-century earlier. There are no known surviving life drawings or photographs of Hinton)

The street doesn’t exist as of this writing (April, 2016) but it will pop back to life soon as the east side of the reunited Courthouse Square as “Hinton Avenue,” named in memory of General Otho Hinton who died here in 1865. Why and when he was so honored is unclear; nor is it known if anyone in Santa Rosa was aware he spent years on the lam from federal authorities.

Otho Hinton robbed stagecoaches, but not in “Black Bart” fashion with a mask and guns drawn. In 1849 and 1850 he was quietly sneaking into the mailbags which in that era could contain anything, including cash transfers between banks. When he was arrested he was charged with stealing $17 thousand (nearly $800,000 today).

The theft was news nationwide because in 1850 that was about how much a typical farmer would scratch together in an entire lifetime. Even more shocking, however, was the identity of the thief. At 48 or 49 years, Hinton was a respected, even esteemed character around Ohio; a popular speaker at political rallies; the founder of a renowned hotel and despite a company bankruptcy a few years earlier, considered a wealthy man with powerful connections. Imagine what it would be like to discover your favorite uncle was actually rich not because he ran a successful business but because he was heisting cars at night.

As you read this account of Otho’s rags to riches to rags to riches life, keep these things in mind: The man had a silver tongue and an angel’s charm. People believed whatever he said. People trusted him even knowing the full nature of his offenses and went out of their way to help him, even putting their own reputations or liberty in jeopardy. Only a single person ever peered into his dank soul and knew him for the scoundrel he was and even wished him dead.

That person was his wife.

Otho Hinton was born in 1801 or 1802 in Maryland but when he was young the family moved to Delaware, Ohio, a village in the center of the state just above Columbus. History’s first glimpse of him was selling walnuts to troops bivouacked there in the War of 1812. He had a simple education before he went to work as a carpenter. He married a woman named Rebecca Gordon and they immediately began having kids. It was an inauspicious start until the stagecoach came to town and his life changed.

Today it’s difficult to imagine how a stagecoach way station would have transformed a backwater Ohio village like Delaware in 1826. The sleepy community that probably saw few outsiders would now have travelers coming through from all directions, sometimes stopping over. Major newspapers would be available to keep residents up to date; mail would arrive every day. And then there was the exotic glory of the vehicle itself, with a coach large enough to seat up to a dozen people behind a team of thoroughbreds capable of racing to the destination at over eleven miles per hour. My gods, the future had arrived. Hinton began working for the stage company before he was thirty and by the time he was forty was on his way to be the wealthiest man in that part of the state as a major investor in lucrative stage lines.

Every chapter of his story shows a man who oozed self-confidence, a man whose powers of persuasion must have been remarkable. He became a General not because of any military experience but because of his popularity (see sidebar). He was in demands as a speaker on behalf the Whig Party despite sounding like an uneducated hick. A local history remarked: “He was a man of ready tongue, slight education and great assurance, and his public speeches, though often ridiculed by his opponents on account of the grammatical inaccuracies they displayed, were generally effective and well received.” Once he spoke for 2½ hours in closed room where it was over 100 degrees, and a paper reported he “riveted the attention of his delighted hearers…the audience was as large when he finished as when he begun. The speaker that can accomplish that needs no other praise.”

His glory days came in 1845 and 1846. He had his military “career” whereupon he came to be called “General” exclusively, as if it were his given name. The stage lines through the town of Delaware were so successful he built the Hinton House, among the best and largest hotels in Ohio and boasting 100 rooms. His main business, O. Hinton & Co. had already expanded to offer stage service in the far west including Iowa Territory and Wisconsin Territory (this was the 1840s, remember) which included government contracts to carry mail. In 1846 he won a four-year Post Office contract to add parts of Illinois and Missouri. That demanded an urgent and substantial expansion of the company, so late in 1846 Hinton negotiated to buyout his largest competitor. But before that deal was sealed, disaster struck.

On December 30 it started to rain and would not stop. The downpour continued for eleven days. Stories appearing in the newspapers were horrific. Herds of animals drowned in flooded pastures. Evacuating residents found escape routes blocked by washed-out bridges. Homes, barns, sawmills and factories disappeared. Some floodwaters rose 18 inches an hour with no end in sight and an Ohio river overflowed its banks by a hundred miles.

With so many Midwestern roads impassible and a slow rebuild of the bridges expected, his company – which was already overextended – was incapable of the extraordinary efforts required to transport the mail on time, or even at all. Within a couple of weeks they started abandoning routes, first a portion of southern Illinois and soon the rest of the state. Within three months the business was ruined and in an attempt to embarrass him into paying an overdue bill for an advertisement, a Milwaukee newspaper published a letter from Hinton stating he could not pay the $6 he owed. The paper illustrated the item with a little engraving of a stagecoach which was printed upside down.

Lesser men might have been crushed by such a bankruptcy at age 45, but General Hinton was perpetually blind to his own failings. He also knew the stage business as well or better than anyone in the country and had a stellar track record lobbying both Congress and the post office. Soon he was an agent and then general manager for the Ohio Stage Company, which covered much of the nation.

It was savvy for the company to have Mr. Personality representing them on the road, but the General’s greatest contribution was that he well understood the price of screwing up mail deliveries. The post office had a schedule of fines for mail that arrived late, wet or otherwise damaged. With penalties ranging from a couple of bucks to several hundred dollars, depending on the importance of the destination, a contractor could quickly find himself losing money or even going bankrupt as Otho did. Making sure a small army of drivers and other company agents working over several thousand square miles handled the mail flawlessly was a daunting job of great responsibility and trust.

The position gave him considerable freedom to travel where and when he liked, taking him away from his family for extended periods. The General apparently was not terribly lonely on those trips, as he petitioned Rebecca for divorce in 1848. She countered by accusing him of adultery.

Margie Hinton, a very distant cousin and an adept genealogist, traveled to Ohio for Otho research and found a trove of Othoabilia at the Delaware county library including papers related to the divorce suit, where his wife reminded him she knew how to load and shoot a gun, implying she would use it if she caught him again with another woman. He complained Rebecca was the cause of almost every setback he had suffered in recent years. The divorce was apparently never finalized.

Although he did not know it, the General had a far greater worry: The post office was aware money was being stolen from the mailbags carried by his company. Mail robbery is a federal crime which was then investigated by the Post Office’s “Office of Instructions and Mail Depredations” (now the United States Postal Inspection Service). Working together, the Cleveland Postmaster and a Deputy U.S. Marshal found a pattern to the thefts and designed a trap to catch the one particular suspect they believed guilty: General Otho Hinton.

2 thoughts on “THE LIFE AND CRIMES OF OTHO HINTON Pt. I: CALL ME THE GENERAL”