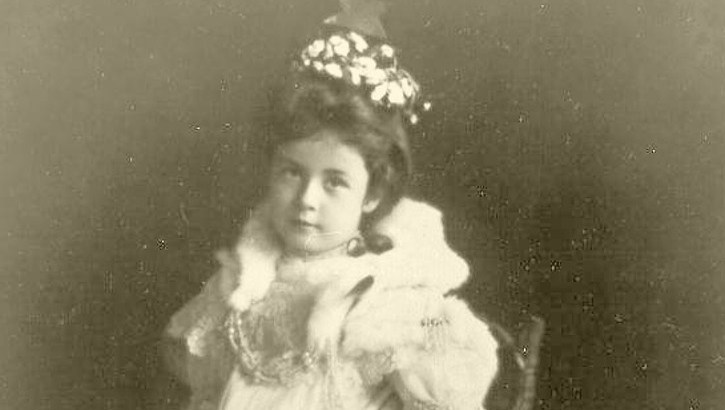 There was doubt that Santa Rosa would have a 1907 Rose Carnival, given that the town was barely recovered from the Great Earthquake; but it was decided that it would be a special juvenile parade and celebration that year, led by 6 year-old Geraldine Grace. A nice symbol of renewal, both.

Besides being cute as a bug in her royal getup,”Queen Geraldine” was probably selected because she was the daughter of beer baron Joseph T. Grace, who owned the Grace Brothers Park where the festivities were held. Geraldine Grace Benoist died in 2005 at the age of 103.

Alas, no pictures of the actual parade survive, but it must have been a delightful affair. There was a boy’s marching band from San Francisco, a handful of floats, and three automobiles festooned in roses. But the main attractions were the kids pushing doll buggies, kids riding in pony carts adorned with roses or poinsettias or poppies or pink hawthorn. Some highlights from the May 19 Press Democrat:

Queen Geraldine was crowned that afternoon “with all the pomp and ceremony of juvenile royalty” to the cheers of “thousands of loyal subjects assembled” as the 155 member children’s chorus sang her Coronation Ode. Other entertainment included a tambourine dance by Miss Charmion Butts, eight girls dancing a minuet, more numbers by the chorus and a couple of girls warbling through “Jockey Hat and Feather,” a mid-19th century parlor song.

It was a modest affair but grand, thanks to the Woman’s Improvement Club, who pulled it off by creating no fewer than eleven committees. All praise to the Committee on Popcorn and Peanuts, the Committee on Lunch for Band, and the Committee on Decorated Baby Buggies, Velocipedes, Go-Carts, Express Wagons, Coasters and Doll Buggies. 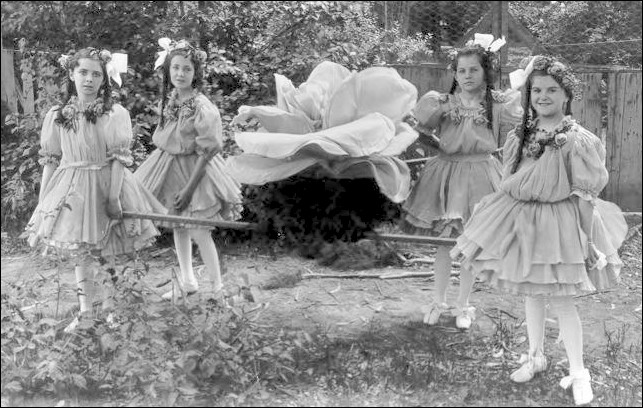 [Editor’s note: This article originally was posted May 15, 2010, and has been edited to remove details specific to the 2010 Rose Festival. The original version can be seen here.]

There seems to be an impression that people have to be invited in order to take part in the coming Juvenile Rose Carnival floral parade. This is not the case as everybody is invited and expected to furnish some feature for the parade. If you cannot put in a float, put in your baby buggy, put your small boy in on his coaster. The bigger that floral parade is the better it will suit the Improvement Club, and the better it will advertise our city and wipe out unpleasant recollections relative to last year’s dissipation on the part of Terra Firma. The Woman’s Improvement Club invites you one and all to help them in making the carnival a success.