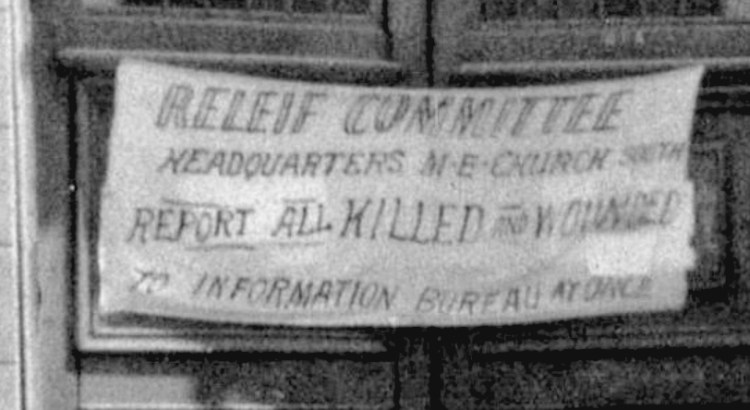 In April, 1906, Santa Rosa was a small town of about 10,000 and everybody pretty much knew everybody else. Now everybody knew somebody dead.


From the April 18 newsletter-sized edition of the Santa Rosa Republican, published the afternoon of the Great Earthquake:

The Press Democrat picked up the grim tally the next morning:

And so it went. The lists contained over fifty names, and the list of injured suggested more would very soon be dead:

It was not all tragedy: “Mrs. N. L Jones was not killed as first reported. She is at Dr. Lain’s residence where she is doing nicely…Mrs. L. C. Cnopius, believed to have been fatally injured, is improving nicely,” the merged Democrat-Republican newspaper reported a few days later, and it was good to hear that Ferdinand Drey was pulled uninjured after a day trapped beneath the ruins of the Eagle Hotel. But otherwise there were sad tidings from the rescue crews:

Those days were a swirl of confusion, and the town’s newspapers, struggling to publish anything at all using a small newsletter press owned by the business school, reported events as well as they possibly could. But mistakes were made, even about something as serious as the finding the dead. The body of Smith Davidson, for example, was found twice, presumably in different locations. On the 21st, it was noted that “the remains of Smith Davidson were recovered this morning from the ruins of the Kinslow building above C. A. Wright & Co.’s store.” Then six days later, “A portion of a human body was found in the ruins at the entrance to the stairway leading to Mrs. Loughery’s rooming house this morning. It is supposed to be the remains of Smith Davidson.”

Then there’s the mystery of “Miss Excela,” part of the “Sensational Gun Jugglers and Fencers” act that was appearing at the Novelty Theatre that week. The April 19 death list listed “Miss Excelsa, Novelty theatre,” then two days later, “The remains of Miss Excelsa, the Novelty actress, and a little girl, identity unknown, were found this morning and taken to the morgue. The body of the latter was taken from the ruins of the Ramona lodging house.” A full profile of her can be read here: “SEEKING MISS EXCELSA.”

There is also the disappearance of Fred Thurber; nearly two weeks after the quake, the following item appeared; apparently his whereabouts are still unknown.

But the sad truth is that we even don’t know for certain how many people died in Santa Rosa on April 18, 1906. The report of the State Earthquake Investigation Commission, which came out over two years later, cites 61 identified dead, at least a dozen “missing.” The Democrat-Republican has the death total as 65 at the end of the month – yet an adjacent item on the very same page mentions the coroner’s inquests that morning included “six unknown persons whose remains were found in the ruins.” When the next list appeared in the Press Democrat the following week, the total was now 69, with the addition of “four unknown dead,” presumably those “six unknown,” downsized for unknown reasons. (NOTE: For further details and a longer discussion, see Body Counts, Part II.)

A letter from Mrs. John Rhoades appeared in the May 3 Fayette, Iowa newspaper: “…The loss of life in the three large three-story hotels was great and can never be known definitely, as fire finished what the earthquake left, including the registers [emphasis mine]. They claim that there were over one hundred guests in each hotel. As to that I cannot say; however there were a great many rescued alive. Besides the the first-class hotels there were four second-class hotels that were also full and shared the same fate, besides six or eight lodging houses, all filled. It is estimated that between three and four hundred people lost their lives, but as I said before I doubt very much if we ever know…”

Then there was the letter that appeared in New York and Los Angeles papers claiming, “…From the St. Rose they took out nine bodies to-day. They found a little girl in these ruins. She was unhurt, but very hungry and thirsty, having been buried four days and nights.” The Democrat-Republican newspaper did not mention a dramatic late rescue or the discovery of a large number of casualties found on April 21, but no paper was published on Sunday, April 22 – was this news that fell through the cracks?

The first frontpage that was printed, just hours after the calamity, offered an advance apology: “The lists of dead and injured given herewith are necessarly [sic] very incomplete, but will be made complete as rapidly as possible. There were many narrow and thrilling escapes, but the limited facilities for publishing a paper after the awful devastation prevent even a mention of these at this time.” Sadly, the papers never got around to telling us about those “narrow and thrilling escapes,” which were too few, or printing an accurate toll of the dead, which were too many.

A young woman named Jessie Loranger wrote to her sisters a couple of days later, “Clarence went to the cemetery this afternoon & worked like a man digging a trench and helping to bury seven corpses. Tonight he has blisters on his hands but feels he has done his duty. A great many don’t do their part. Pa painted the names on boards for marking the grave. He used a little brush of Sybilla’s and a little paint Charlie had at home.”

Also from the letter of Mrs. Rhoades: “There were forty bodies buried here yesterday [the first Sunday after the earthquake].”