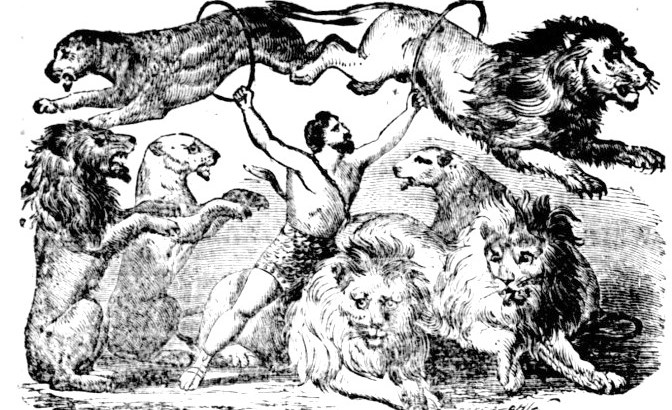 Before Thanksgiving or Independence Day were national holidays, there was only one event nearly every American celebrated, regardless of class, race or creed: The day the circus came to town. That two-century tradition ends on May 21 when Ringling Bros./Barnum & Bailey gives its last performance. Before the Big Top comes down for the last time, here’s a look at what it meant to small towns like Santa Rosa and Petaluma, as viewed through their newspapers.

By no means does this series represent all the circuses that came to Sonoma county – this is only a small sample. It was not uncommon to have two or three every year, and even the shows that returned often were different enough each time to be a considered new.

Because of the number of images involved I’m breaking this article into two parts. This section covers the early circuses travelling by roads and waterways; these wagon shows were dinky affairs compared to some of the monster spectaculars which came here after the railroads were available, as discussed in part two, “LET’S GO TO THE CIRCUS ON COLLEGE AVE“.

But regardless of the year or degree of magnificence, every circus day was magic and were the climax of weeks of hot anticipation. The places you had walked past thousands of times – fences with scabby whitewash, streetlight poles, the plain brick walls on the sides of businesses – those drab things were now transformed by beautiful lithograph posters showing flying trapeze women, daredevil animal trainers and other scenes you had never imagined. You know the scene in The Wizard of Oz where Dorothy opened the door to Oz into a world riot in color? It was like that, only better because YOU were about to enter such a magical place. And you would go there. Nothing on earth could stop you.

This is the oldest circus ad I’ve found in the local newspapers, dating to June, 1856. The promise that “The Police Department will be under the supervision of efficient officers” suggests the public believed a circus attracted criminals and troublemakers.

The 1857 ad for the Lee & Bennett circus also has the “efficient officers” vow. Note they don’t say much about the acts, but boast at length of their “magnificent, new, and costly” wagons. They promise the Big Top is waterproof and ladies will get cushions for their seats. Classy!

Until the railway reached Santa Rosa in late 1870, circuses with large animals rarely visited Sonoma county in those days. This 1859 show with two elephants was the first exception. As with most circuses seen here in that era, the performance was mainly horseback stunts, acrobatics and a featured clown.

The patriotic theme of the “United States Circus” reflects the national mood in the first months of the Civil War – although it may not have gone over so well in pro-Confederacy Santa Rosa and Healdsburg. “Blondin” was the famed tightrope walker who crossed Niagara Falls.

Although there was still no train service to Santa Rosa in 1869, we were on the tour route of Dan Castello’s Circus and Menagerie, the first East Coast show to come to California via the new transcontinental railroad, which had been completed less that four months earlier. “Their immense posters cover half the town, and everybody is anxiously waiting to see the greatest show of the age,” the Democrat commented. It seems the ads exaggerated the number and varieties of animals; their wagon caravan included only ten cages and a couple of elephants and camels. A correspondent to the Russian River Flag wrote, “It was agreed by us that the menagerie was a failure, but the circus part we liked very well.”

The 1872 San Francisco Circus and Roman Hippodrome was the first show in Santa Rosa to introduce exotic themes, with an “oriental pagoda” and Roman Empire-style chariot races. The show also included a political angle, with “Horace Greeley, Comic Mule.” That year Greeley was the most well-known among the eight candidates running against incumbent President Ulysses S. Grant and lost by a landslide (in Santa Rosa he came in fourth). Greeley actually had died four days before this Santa Rosa performance.

Montgomery Queen’s 1874 Circus and Traveling World’s Fair drew an audience of 2,800 that night in Santa Rosa – about the same as the official population of the town. Since before the Civil War, the price for an adult ticket was always one dollar, which would be between $30-40 in today’s currency. Even if half this 1874 audience were children, they pulled in about $60,000 (adjusted for inflation) with this one show. While circus life was hard on the performers, crew and animals, it was undeniably very profitable for the owners.

Queen’s Great Moral Circus was here in 1875 and I’m presuming it was not a railroad show, as their route went from Petaluma to Sonoma and there was no rail line running between the towns. Aside from the appearance of a living giraffe and a “hogapotamus,” this visit was special because of a delightful story which appeared in the Sonoma Democrat:

GOING TO THE CIRCUS.

Yesterday morning as we were quietly strolling down town, with both hands in our pockets, thinking of nothing in particular, our meditations were disturbed by the loud demand:

“Whar are they a-goin’ to stretch the canvass?”

Looking up, there stood a tall, rawboned fellow with a grizzled beard and sun-burnt face, waiting for an answer.

“Why, the circus,” you know, replied the man from the mountains.

We confessed our inability to direct him, and he pursued his way with a compassionate look on his face for our ignorance. Determined to become better posted about the circus, and to take a hand in the fun going on, we had not gone far until meeting a platform of eight small boys stretching quite across the pavement.

“Going to the circus, boys?”

“Could you tell me where the tent is?”

Sure enough, there it was, nearly covering Bill Hardy’s lot with about an acre of canvass, and surrounded with empty circus wagons, loose horses and piles of baggage. The cook stove was smoking through a short pipe, and the cook, a gentleman from Africa, was taking his morning wash in a basin that looked suspiciously like a bread pan.

On the street corners pretty girls, carrying new parasols, were grouped together, looking with admiring glances into shop windows. Along the streets new arrivals of young fellows on horses, and old fellows, just as young within were soberly driving family tumouts, containing mother and the children. As a rule from three to five of the little people contrived always to get on the front seat with the driver.

The circus band struck up the inspiring strains of “Champagne Charley,” and a mingled mass of humanity began winding its way to the “horse opera.” There, from the moment of the grand entree until the close of the performance, the boys and girls seemed spellbound with the Oriental magnificence of its sights and sounds. The venerable jokes of the clown were as new and as keenly relished as, ah, me, so many years ago, when the reporter was a boy. The gaily spangled dresses of the riders, and the fearful perils of the horsemen, held the lower seats, filled with boys, in the same trance of wonder. The eight boys had managed to get seated in a row like so many chickens on a fence, their mouths slightly opened, and their honest eyes protruding enough to be scraped off with a stick. Innocent boyhood enjoying its first pleasures. Most of them had, without doubt, performed unheard of tasks for three weeks to get taken to the circus. At its close, about four o’clock, when the audience began to disperse, they broke into family groups and slowly wended their way down street to their wagons, homeward bound, with heavier hearts and lighter pockets. How many of them wished they had their dollar back? The middle-aged frontiersman of the morning was seen mounted on a cayuse, headed toward Guerneville, riding pensively along, a little sideways in the saddle, trying to urge the pony into an easy lope, doubtless for reasons best known to himself.

How much money the showman took away is a question that cannot be answered. But, judging from the number in attendance, it must have been enough to pay off the debt of either of the Santa Rosa Colleges.