Want an example of how different our ancestors were a century ago? Try this: Imagine dentistry as a spectator sport.

On a summer evening in 1913 Santa Rosa, an audience gathered on the corner of Courthouse Square to watch fifty people have a tooth pulled – or maybe it was just two people having all their teeth yanked. The local paper was not clear on the details except that it “attracted a large crowd who were interested in seeing the operations performed.”

The article in the Santa Rosa Republican is a rare description of the traveling exhibition by the “Painless Parker” dentist’s office in San Francisco. Using a large Locomobile touring car – probably similar to this one – everything behind the front seat was custom rigged with “a platform on the rear large enough to accommodate a miniature dental office, with operating chair, instrument table, lights, etc.” 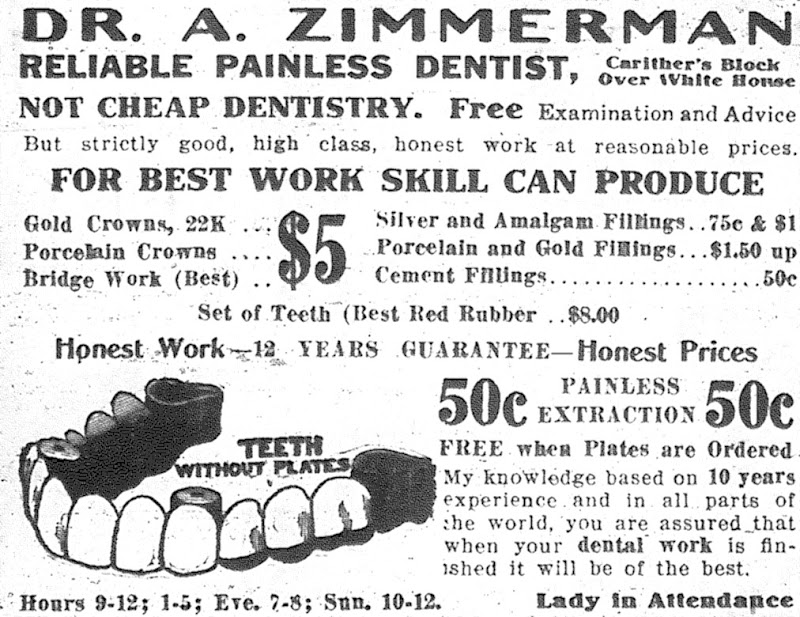 This was demonstration auto #6 (out of eight) prowling the state, and although “Painless Parker” himself was not in Santa Rosa that evening he was a real person and actually a dentist, although his profession disowned him. By 1913 Edgar Rudolph Randolph Parker (1872-1952) was a multimillionaire running a chain of dental offices on the West Coast but he began as a Brooklyn street dentist, drawing crowds with dancing girls and a brass band that played on cue whenever he “painlessly” ripped out some poor devil’s tooth.

When he came to California around 1908 he teamed with “Wizard Walton the Wonder Worker” and developed a traveling medicine show, complete with a parade where coins were tossed into the crowd, all leading up to an evening vaudeville performance that ended with a extravaganza of teeth pulling. Walton was a snake-oil huckster of the type that regularly visited Santa Rosa in that era, promising miracle cures in a bottle. A 1908 blurb promised, “gall stones are removed by the use of three doses of medicine in 24 hours without knife, blood or pain. Cancers cured permanently. No knife, blood or pain.”

Parker’s secret to painless dentistry was “hydrocaine,” a local anesthetic he claimed to have developed himself (a man in Chicago had trademarked that name as an anesthetic in 1899). Some of his ads specified it was not cocaine but “a purely vegetable product, harmless yet powerful enough to remove all fear of the dental chair.” In a 1915 suit, two former employees demanded danages for alleged injuries to their “eyes, nerves, muscles and tissues” from administering the “poisonous drug.” Whatever that stuff was, it certainly had no connection whatsoever to the fine medical product available with the same name today and whose manufacturers, distributors, and customers are noble people kind to their children and small pets. Please don’t sue me.

His New York Times obit noted he “often had his license revoked but for no great duration.” Parker was the bane of the dental community, his fame coming just as they were scrabbling for legitimacy – medical doctors usually offered a dignified two-line ad in a newspaper’s “professional” classifieds, yet dentists often ran large and garish display ads, promising to fix your bum teeth for less than the price of a cheap wool suit. 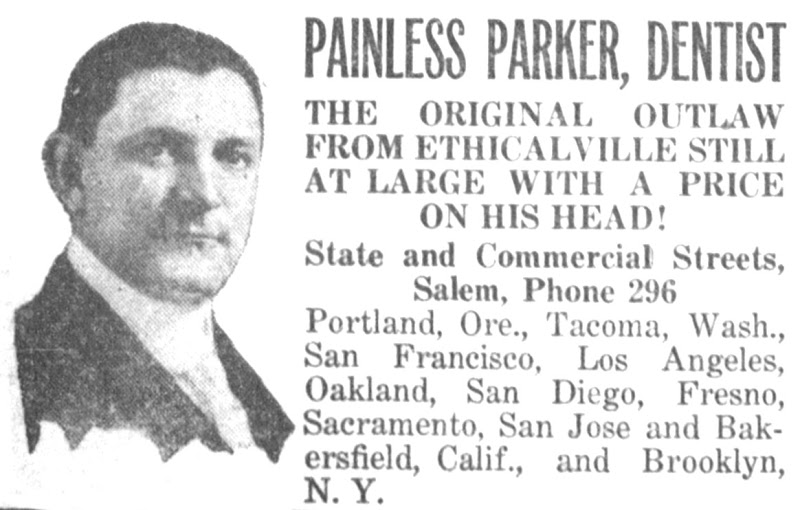 Parker fought back in the press, arguing the “Dental Trust” was opposed to affordable dentistry. His display ads were often op/eds and he offered papers a serial, “Painless Parker, Outlaw: His Confessions” that ran to at least 87 (!) parts. He tried to get the state Board of Dental Examiners disbanded in California and Oregon, and in 1935 he sued a doctor for slander because of a speech to the California Dental Association saying the state needed a law “to control the advertising of charlatans, quacks and painless parkers.”

Most often he was hassled for using the word “painless” in his ads, forcing him to sometimes retreat and promote the “E. R. Parker System” instead. In 1915, his foes in California thought they finally had him beaten via passage of a state law requiring dentists to use their real name in ads. But in a true Believe-it-or-not! manner, he won by going to court that September and having his first name legally changed to “Painless.”

Many Santa Rosans were entertained last evening at the corner of Fourth street and Exchange Avenue by a demonstration of painless dentistry made by the Painless Parker demonstration car, number six, from San Francisco. A short lecture was given on the care of the teeth and then about fifty teeth were extracted free of charge. The car will be at the same corner again tonight and it is announced that all teeth will be taken out free of charge.

The car is a large Locomobile, and one of the eight that the Painless Parker institution has. It is splendily [sic] equipped for the work, having two seats in front and a platform on the rear large enough to accommodate a miniature dental office, with operating chair, instrument table, lights, etc., and attracted a large crowd who were interested in seeing the operations performed. Those who had teeth taken out stated that they felt no pain and several were extracted for people said that they had been broken off by other dentists in unsuccessful attempts to extract them.

The Painless Parker institution is the largest dental concern in the world, having offices in several large cities stretching from Brooklyn, N.Y. to San Francisco. There are five offices in California: Los Angeles, San Diego, Bakersfield, Oakland and San Francisco. The San Francisco office is one of the three largest dental offices in the world, having twenty-two chairs. All of the operations by this concern are performed by a local anaesthetic [sic] originated nearly 25 years ago by Dr. Parker. The doctor makes his home in San Francisco where the general offices of the concern are located. He has a summer home in Marin county about ten miles from Fairfax on the Bolinas road. He is in New York now but his family is at the summer home. The car is in the charge of Drs. FitzGerald and Baird.