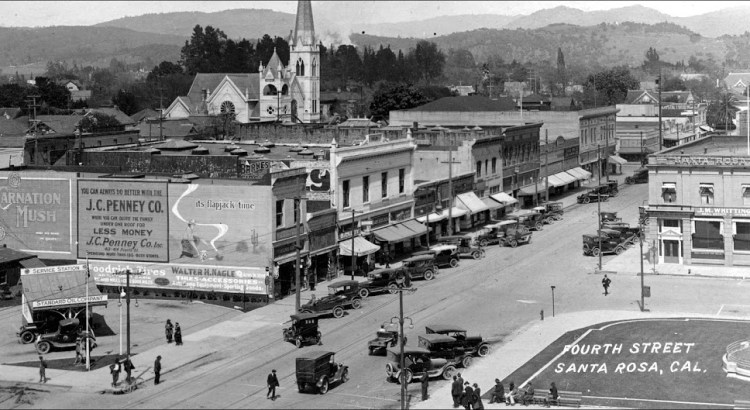 Hey, remember when we looked forward all week to having fun in downtown Santa Rosa on Saturday night? Me neither.

There’s plenty of elbow room for anyone on downtown sidewalks after dark and Saturday nights are no different. Sure, if you like pub grub ‘n’ suds while watching sports there are at least a half dozen joints where you can park your carcass for a few hours. There are also very good restaurants, a first-run cineplex and live entertainment, but there’s a catch – those places are at the outer reaches of the downtown core or in Railroad Square. Plan on a five block hike between destinations, walking past all those downtown banks which after hours are just featureless walls with an attached ATM. And if you plan trekking the circuitous route to and from Railroad Square after the Fortress Shopping Mall is closed, thou hast more stamina and courage than I. What once was boasted to be “the city designed for living” is now “the city designed for daytime banking” and not much else.

It wasn’t always thus. A little over a hundred years ago, downtown was packed on Saturday nights. Stores were open late; a band toodled popular tunes from the old courthouse balcony. As the Press Democrat described the scene in 1905, it was a weekly celebration of community which seems impossible to imagine happening today:

Alas, 1905 was probably the last year of the Saturday night shopping musicales; by 1913 the merchants wanted to close up by 6 o’clock because there wasn’t enough business to pay for the lights and the workers. That came as no surprise; a few months earlier, most downtown stores closed early on a Saturday night so store clerks could attend a dog show.

What happened? The 1906 earthquake, for starters, which turned all of downtown into a construction zone for more than a year. Saturday was traditionally the day farmers came in to town for shopping, and post-earthquake downtown was less inviting to horse-drawn wagons and buggies, with fewer hitching posts (in 1912 the city finally gave in and set up the vacant lot at Third and B streets with posts as a kind of horse parking lot). When parcel post was launched in 1913 the need for farmers to venture downtown and shop in person was nearly eliminated, as same or next day mailing of packages from local stores was nearly free.

Another change after the earthquake was that downtown began developing a theatrical district, with a new movie or vaudeville house opening nearly every year in the 1910s. Entertainment was a reason to be downtown apart from shopping and the two might not mix. It’s one thing to sit on the courthouse lawn with your groceries while listening to the band play a dance tune in 1905, and another to carry a bag of fresh onions into a theater in 1912 showing a Bronco Billy double feature.

There was no ordinance passed demanding retail stores lock their doors every night at six, nor one requiring them to stay open. And there’s no direct link between today’s situation  and their 1913 decision to not stay open on Saturday night (although all those the darkened store windows would look mighty familiar to us).

Yet the early closing and not resuming the Saturday night concerts were capitulations that the downtown was not the heart of the community binding us together, but instead merely an assortment of independent businesses. That attitude led to the downtown withering away after WWII, starting with Hugh Codding poaching the retail district for Montgomery Village in 1952 and Coddingtown ten years later. After that came terrible planning decisions favoring bankers and bureaucrats. The entire south side of downtown was wasted on low-use federal, state and city administration buildings. City Hall was also unforgivably built on the site of a major Pomo village and destroyed access to Santa Rosa Creek, which was always the town’s crown jewel.

Reunification of Courthouse Square may be an appealing notion (it certainly has my approval) but it’s going to do nothing to mend a downtown which has been systematically dismantled for over a half century. The day when the old streets of Hinton and Exchange are reopened might be reason to celebrate, but nothing will really change. The Plaza will still remain an obstacle splitting downtown from Railroad Square as well as the transit hub from the SMART train station. There still will be no place downtown where anyone can buy an apple or an aspirin because there are no grocery or drug stores. The place will still be a ghost town after six.

Which brings us to “Smile.”

A few months ago Gaye Lebaron wrote a column on the 1975 movie of that name which was filmed here. A brilliant satire about America’s tacky culture (the plot centers on teenage girls competing in the “Young American Miss” beauty pageant) the film reserves its real jabs for the Jaycees and other Chamber of Commerce types who promoted the contest. Santa Rosa itself had a starring role although it was somewhat misrepresented – the title credits left the impression the town was mainly a series of trailer parks – and locals were apparently enthusiastic during the filming, with many of them having bit parts. When the movie debuted however, many angrily felt it made mockery of them. The director defended himself, saying “I was trying to show the people as they really are,” and called Santa Rosa “the all-time happy place…[an] American kind of town that could be anywhere in the country.” Small consolation after a major review said the town “appears to be blighted by a kind of inbred cultural smog.”

But the movie “Smile” is a love letter to Santa Rosa compared to the musical “Smile.” In 1983 composer Marvin Hamlisch announced the work-in-progress, telling the New York Times, “We want people to feel they’re right there at Santa Rosa, Calif., watching 16 teen-age girls compete for the title Young American Miss.”

A revised version of the musical made it to Broadway in 1986 (it ran only for six weeks) but the original had a different lyricist: Carolyn Leigh – best known for “Peter Pan” – who wrote the song, “Nightlife in Santa Rosa” to set the scene. It’s pretty obvious all she knew about Santa Rosa was what she gleaned from the movie, but it’s still a good sendup of the town that really did roll up its sidewalks on Saturday night, and had for a long time.

Excerpts transcribed from the CD “Witch Craft: The Songs of Carolyn Leigh” by Sara Zahn:

Nightlife in nowhere city
Talk about your madcap town
No sooner than the pretty
Santa Rosa sun goes down
There’s nothing but the flushing of the chemical johns
From seven thousand mobile homes
Nightlife, Santa Rosa
You sit in the tub
And applaud as the bubble bath foams

Oh, God, what are we doing here
Oh, God, sittin’ and stewin’ here…

One bar, a bar-b-que stand
A counter man who don’t wear shoes
They closed the all night newstand
Maybe because they don’t got news
They lit a roman candle on the Fourth of July
I hear it made the L.A. Times
Midnight, Santa Rosa
I’ll trade you two of this town
For South Potawatomi and a lobotomy…

What’s hot in Santa Rosa
Nothin’ in the goddam place
Nothing but a hotshot in Santa Rosa
Bettin’ on a bedbug race
[spoken: Hello, operator? Get me Dave Shapiro at the William Morris Agency-what time did you say it was?]
Nightlife in Santa Rosa
Is going to bed
Because everything’s dead
Except me and a head full of dreams

When this is taken into consideration, the merchants and their clerks would prefer to remain at home with their families instead of standing about their respective places of business.

On Thursday and Friday the petition was signed by a number of the prominent merchants, and it is believed that it will be so generally signed that in the near future all the stores may be closed on Saturday evening.