Summer’s nearly over, so following a long tradition (which started last year) let’s pause to gaze navelward and ponder What It All Means.

The last occasion was this blog’s 500th entry, where I put together a “Best of the Blog” index of the stories most popular, important or odd. This time, at milepost #550, I’d like to muse a bit about what this project’s taught me about misinterpreting history.

My process to create this journal is simple; I read every issue of both Santa Rosa newspapers cover-to-cover, just as people did when the ink was fresh. Every gossip column. All mundane city council reports. Endless complaining and shaming over whatnot on the editorial pages. Santa Rosa’s past flows through the library microfilm readers like a boring, torpid river.

Yet all of it is valuable – no event is simply an isolated pin stuck on an historic timeline. For instance, the previous item here revealed the first-airmail biplane in a Washington, D.C. museum may not be the famous aircraft after all. The airplane was sold in 1912 by Ben Noonan, whom I knew was a boyhood friend of pilot Fred J. Wiseman, who made his historic flight a year earlier with Noonan driving the chase car, which was the same auto he used in a 1909 California Grand Prize Race to win $500 by beating Wiseman. Noonan’s family owned the slaughterhouse at the corner of College and Cleveland Avenues where the airplanes were stored, and just a few months before they were sold there was great commotion because sausage maker Otto Ulrich caught fire thanks to all the grease on his clothes and had to be extinguished with a hose because his enormous boots kept him from fitting in a tub of water. (Eat you heart out, Marcel Proust.)

Point being, when I wrote that article I probably knew as much about Ben Noonan as the average Santa Rosan at the time. Reading all those the newspapers leading to that single 1912 event provided rich context – and when it comes to history, context is everything. (It also makes Jack a dull boy; never ask me about the 1905 hops market at a party.) 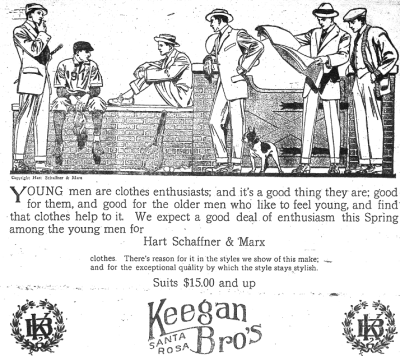 Consider the rate of progress of those days; it’s astonishing how quickly Santa Rosa seemed to bolt forward starting in 1910. By the end of the following year automobiles were everywhere. Sidewalks were no longer rolled up at sundown; downtown was transformed with electric signs up and down Fourth street, including marquees of several vaudeville and movie theaters. Fashions were looking more comfortable to wear and women’s hats were no longer great platters of flowers. Technology invaded the newspaper ads, selling phonograph records and Kodak cameras. And another modern switch – more advertising was intended to appeal to women and children.

Contrast that to five years earlier in 1907 when the pace was slower and locals seemed wary of things changing. An article appeared in the paper explaining how to properly speak into a telephone and the banking crisis that year demonstrated many didn’t understand dollar bills were real money. Then step back five years further and it seemed Santa Rosa was still a farmtown in the Old West, with prominent ads for horse-drawn plows, oil lanterns and blacksmiths. After several months reading only 1912 and later, I recently did some extended research in earlier newspapers and it was jarring to look at papers from 1902. This is absolutely true: When I displayed the first microfilm pages from that year, I imagined a whiff of something musty and very old.

The contrasts between 1902 and 1912 newspapers were so wide it’s difficult to remember they were produced by mostly the same people covering the same town. The difference easily lends to generalization: Santa Rosa 1912 was firmly a 20th Century town just as 1902 appeared to be part of the 19th Century, with 1907 being a waystation in between. That’s trite, and I apologize for having made similar comparisons here. While by appearances 1902 Santa Rosans were still mostly living La Vida Victorian, they had more in common with the residents of 1912 than the people who lived here in (say) 1880.

And while I’m on the subject, it’s equally silly to view Santa Rosa as being transformed by the 1906 earthquake. Yes, the destruction downtown led to many old-fashioned buildings being replaced with contemporary architecture but for years still the new stores had hitching posts in front, just like the old days. At night in post-quake Santa Rosa it was still mostly dark because few homes had electricity, thanks to rates being about 25 times more expensive than we’re now paying.

At the same time, it really does seem Santa Rosa experienced a kind of “great leap forward” in the early 1910s. How to explain that? Again, context is paramount.

Credit had been tight since the Great Earthquake and tightened even further by the Bank Panic of 1907. But beginning sometime after 1910 bankers apparently became eager to loan, which led to a building boom all over Sonoma County. The sticker price for autos was still high (although starting to come down) but cars became affordable as dealerships introduced loan financing.

Suddenly having electricity was a luxury no more, as the Great Western Power Company, a competitor to PG&E, began offering power in Santa Rosa and other communities. Rates were still about 10x more than we pay today, but looked like a bargain compared to what they were a few years earlier. Great Western also pushed customers to buy electrical appliances – paid for on the installment plan, just like cars – while PG&E offered their customers financing to pay for wiring their homes. (Bicycles, typewriters and pianos could also be purchased on “time payments” – seeing a pattern here?)

Once everyone ceased being so uptight about money, Santa Rosa turned out to be a pretty cool place. The 1911 vote on women’s suffrage won in Santa Rosa by a wide margin while it was defeated in Petaluma, Sonoma, Windsor and Healdsburg. While many communities were kowtowing to church moralists and outlawing “rag dancing” in public, Santa Rosa’s City Council wouldn’t even consider a ban. (Petaluma arrested at least two men for disturbing the peace by doing the “rag.”) And judging by the uptick in newspaper ads from stores that sold Victrolas or Edison phonographs, you can bet the latest hit record could be heard playing at night from many a home where the lights blazed inside and a new car waited at the curb, everything bought on credit except for the ragtime tune in the air.

To sum: Several factors contributed to make Santa Rosa appear happy and prosperous in the early 1910s, and everything changed quite fast. Consumerism, innovations which created cheaper and better stuff, more affordable electricity and Progressive era political reforms of the banking system after the 1907 panic all helped. But what probably made the most difference was simply ending the credit crunch, which had a ripple effect on all aspects of the economy.

I was going to wrap up it up there, but couldn’t stop thinking about the contrasts between the early 1910s and the decade earlier. Why did the former seem like the beginnings of the modern age while newspapers from the 1900s seemed so…historical?

Much of the reason was personal bias, I realized with shame. The earlier newspapers not only had an old-fashioned look, I didn’t like them because they’re a pain to read on microfilm since the pages were often thick blocks of text in mostly the same size typeface; article headlines weren’t large, bold and easy to quickly spot as they were in the 1910s (and today). Those older newspapers were intended to be read quite differently, poured over during breakfast or after dinner. The daily newspaper was a primary source of entertainment and subscribers got their money’s worth.

I confess also showing my biases in other ways. The year 1912 just seemed more contemporary because toe-tapping ragtime was the hit music rather than turn of the century sentimental dreck such as, “A Bird in a Gilded Cage.” I also made the presumption that the arrival of more technology in the 1910s was a sign of modern times, but a closer look reveals those improvements were really minor and incremental; true leaps of progress using that tech was still years away. Cars were more reliable in 1912 but once a driver left city limits, roads were better suited to stagecoaches; it wouldn’t be until after WWI before the state highway system made it practical to travel very far. It was nice PG&E wired homes for electricity but there was little use for it aside from flicking on a light switch. It would be a dozen years before those houses had today’s essential refrigerators or radios or furnaces with electric thermostats.

In short: Except for women’s suffrage and the improved economy – no small things, granted – the early 1910s weren’t so exceptional after all. Those years certainly weren’t the Gateway to The World of Tomorrow.

And I was also wrong about viewing the earlier period as historically different. In fact, one can argue Sonoma County truly entered the modern era between 1895-1905, the antique-looking pages with ads for plows and blacksmiths aside.

While there were no autos until later in that period, bicycles were the rage; everyone rode them around town, young and old, men and women, and for many women the “wheel” brought unprecedented independence. (Susan B. Anthony, 1896: “[Bicycling] has done more to emancipate women than anything else in the world.”) That era saw other great leaps in freedom to travel; once the electric railway was completed in 1905, it was easy to hop aboard the streetcar and quickly be in any town near Santa Rosa. With the finely-tuned schedules of the train and ferry system, trips to San Francisco took no longer than the modern commute. (It never ceases to amaze me how mobile our ancestors were in the time before cars; every day the papers routinely mentioned locals took the train down to San Francisco or Berkeley for the day or evening.)

Fewer had electricity at home back then, but they weren’t living in darkness. Probably every home had a Welsbach mantle which produced bright, odorless illumination. So popular were these lamps that many with electrical service continued to use them to augment incandescent light – my family kept one above the kitchen table until the early 1960s. Too bad about the fuel being slightly radioactive, however.

And while Santa Rosa traditionally voted as if it were some far-western outpost of Dixie, the town broke with the “Solid South” in the 1904 presidential election to vote overwhelmingly for Progressive candidate Teddy Roosevelt, despite the Press Democrat’s hot-blooded attacks on him and other Republican candidates.

Thus after reading all those years of Santa Rosa newspapers and writing hundreds of articles about same, my conclusion is this: Conclusions are hard to come by.

It’s easy to draw lines around some bit of history and slap a label on it, or say it happened for a particular reason. But the closer one looks at any event in the past, the explanations and categories – which once seemed so easy and obvious – often begin to appear less certain. There is always more context to a story than first seemed apparent.

The great History of California volumes by H. H. Bancroft are a scholar’s treasure, but difficult to read. Every page abounds in footnotes – sometimes filling half the page – and the footnotes often reference other volumes. After awhile you find yourself lost in chasing down the footnotes and cross-referenced material, having nearly forgotten the original research topic. About then it dawns on you the footnotes are the real history, revealing the full story which needs to be told. It’s important historians never lose sight of that.