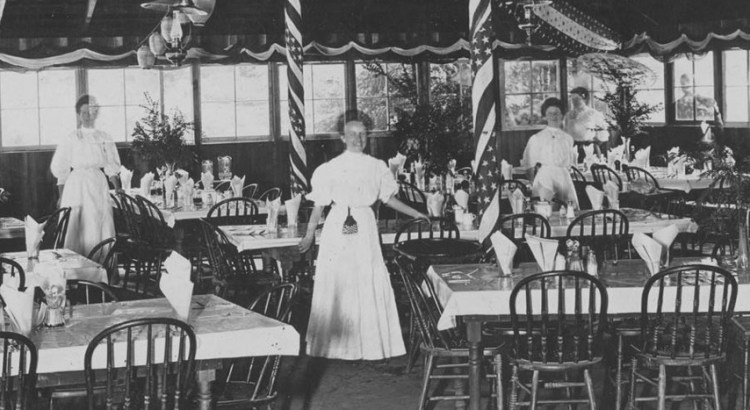 In the years straddling the turn of the last century, it seemed everyone in Santa Rosa was coming and going to the Russian River during the summer months. For many of them, however, the appeal of the river area had less to do with water activities than the siren call of rocking chairs in rented cabins, croquet and bowling and billiards with friends from town, hotel service, and for some above all, eating.

Much has been written about the river scene from the mid-1920s onward, but info about the first decade of the river resorts is scarce, although they were a central part of Santa Rosa life in early 20th century summers. Where exactly were these places, and what were they like? Why would someone prefer to go to Camp Vacation instead of Summerhome Park? After picking through out-of-town newspaper ads, railroad timetables, maps and atlases and all those “personal mention” columns tracking local residents, I present (what I believe to be) the first cross-referenced map of the Russian River byways during that era.

My early confusion centered upon the tangled names. Some spots were known by two or more – the Olivet train stop became Woolsey and Trenton became Laguna, for instance – and making matters worse, the Santa Rosa newspapers were sometimes sloppy about accuracy. Before Eaglenest became Rionido, then later Rio Nido, it was also in the papers as Eagle Nest, Eagle’s Nest and Eagle’s Nest Camp. And don’t even ask about Camp Six.

It’s also tricky to judge the popularity of any of these places. A new get-away popped up almost every summer during those years, while the paint was still almost fresh on the oldest resort, only about a dozen years old. Time spent anywhere on the river was still a novelty, something to talk about with your neighbors and friends, and the next time you went maybe you’d try another place that you’d heard good things about. Today it’s hard to imagine the Russian River wasn’t always a tourist destination, but most thanks for transforming a no-man’s-land of redwood stumps into a primo resort area goes to north coast railroad baron A. W. Foster, president of the Northwestern Pacific (NWP). Mr. Foster is best remembered as a heartless supervillain in the 1905 “Battle of Sebastopol Avenue” (although it’s more likely that history has given him a bum rap). As logging was winding down in the mid-1890s, Foster saw an opportunity to cash in on the growing popularity of Sunday excursion trips and vacation rentals, as best told in the often-quoted (but rarely credited) book “Redwood Railways” by Gilbert Kneiss:

It’s not the job of this Santa Rosa-centric blog to tell the story of railroads, but I wish more history was available on how Foster and his railway developed this area. Did the NWP plan and build the resorts, then selling or leasing them once profitable? The intriguing thread tying most of the resorts together was Santa Rosa’s industrious Cnopius family, who were apparently managing nearly all of them at different times between 1896 and 1906. Did they work for Foster? Mrs. L. C. Cnopius (no first name found, sorry) was particularly key to the progress, and her importance was even noted in San Francisco obituaries. Mrs. Cnopius is also known here for being the last direct victim of the 1906 Santa Rosa earthquake. The first resort to open was Mirabel Park, which soon became a particularly popular spot for large groups – unions, churches, fraternal organizations – to hold day-long Sunday picnics. So great was Mirabel’s appeal that it threatened the overall success of the area. In the 1900 San Francisco papers it was reported  that “many families fear to take [Russian River trains] owing to the dread of coming in contact with Sunday picnics,” although the railway assured the public that “this road has had no trouble on this score.” Still, they promised to herd picnickers into separate train cars: “In the future, therefore, no one traveling on the California Northwestern Railway on Sundays will come in contact with Sunday picnics.”

Mirabel Park was also somewhat unusual in this era for having a “villa” offering actual boarding rooms. More common were partially-furnished bungalows for rent or sale, should you have the overwhelming urge to buy a tiny shack with no running water or electricity. And these cottages near the river did not sell cheap; ads from real estate brokers listed them for $400 up, about three times more than a place in Camp Meeker.

Bungalows were suited for anyone spending the season on the river or planning to entertain friends, as many people did. But most people vacationing for a few days or so stayed at one of the tent hotels, adults $2/day, $10 per week, children under ten half-price. An advertisement for Camp Vacation describes the accommodations: “To sleep beneath a tent, to pass the day in the open air and have nothing else to do is to camp with luxury. Camp Vacation makes this easy for all. It is a hotel under canvas. Regular hotel service is furnished, but the guests live in tents. The tents are provided with wooden floors, are well furnished and are taken care of by those in charge.”

Meals were included in the deal, and the all-you-can-eat grub seemed to be as much an attraction as the Great Outdoors. In a September, 1908, San Francisco Call how-I-spent-my-summer-vacation writing contest, 8th grader Ruth Moore told of her good times at one of the tent hotels:

For Santa Rosans and other locals, the most popular resorts – or at least, the most often mentioned in the newspaper columns – were Camp Vacation, just across the river from Bohemian Grove, and Eaglenest, location of modern-day Rio Nido. The latter included bungalows and a true resort hotel, complete with a “box ball” bowling alley (a cross between a half-length 9 pin bowling lane and and a looooong coffee table, often found in arcades at the time – photo here). Besides four miles of beaches,  Camp Vacation offered tennis courts, and it’s worth noting that tennis and box ball bowling were among the few genteel sports where women could compete against men.

But maybe the best part of those months was having the entire lower river available as your personal playground. When passenger and freight trains weren’t scheduled, the railway used the tracks to offer a kind of trolley service using an ancient steam engine and open railway car recycled from the old timber days. Meeting your friends at a particular swimming hole by catching a ride on the “Coffee Grinder” –  which looked like an oversized toy, and puffed away at less than ten miles per hour – added to summer’s delight.

Even the James Wyatt Oates family joined the river stampede, in their own way. The couple escorted a couple of girls a family friend and her daughter to a 1909 house party at the home of Charles Rule in Jenner, where they visited at least once a year every summer or autumn.

This chapter of the resorts ended in late 1909, when the NWP line finally met the narrow gauge railway that came up the coast. After that the railroad began promoting the “Triangle Trip” Sunday excursion trains from San Francisco, a 150-mile ride with a little stopover at Monte Rio. A day out of the city sitting on trains while watching some nice scenery, then home for dinner. Oh, look, there’s a beach. Those trees look tall. Gee, I wish there was only some way I could stop thinking about work.

NEXT: Big Changes on the Russian River in 1910

NO PICNIC CROWDS
To Interfere With Regular Sunday Travel.

The California Northwestern Railway is making heavy preparations for handling next season’s business, and among other things will give special attention to its Sunday travel. The section which this road traverses is more than attractive for short Sunday trips, but many families fear to take them owing to the dread of coming in contact with Sunday picnics. While it is true this road has had no trouble on this score, it is determined to eliminate from the minds of the public all idea of this contact. Although the picnics up the road to Mirabel Park, etc., have in the past been kept separate from the regular travel, there will be none whatever this coming year, and those attending Schuetzen Park will be run on separate boats and trains. In the future, therefore, no one traveling on the California Northwestern Railway on Sundays will come in contact with Sunday picnics.

I hear that box ball in the bowling alley at Eaglenest has been a fascinating pastime for a number of our society women who have been spending a portion of their vacation there during the past few weeks. So interested did they become, some of them, in the sport, that quite a little good-natured rivalry was aroused as to who could make the highest score. I know one lady who made a record score, but social excommunication is threatened if the newspaper divulges the name. Some of the best players, however, are members of the Irene Club and some of them have been guests of Mrs. Charles A. Wright at her bungalow at Eaglenest.

Colonel and Mrs. Oates, Mrs. Dorothy Farmer and Miss Hazel Farmer were included in a house party at Rule Ranch as the guests of Charles H. Rule. Colonel Oates will return the first of the week, but the ladies will remain for several days longer. The hospitality of Rule Ranch is always very cordial.

Camp Vacation  as the name of a railroad station on the Northwestern Pacific is a thing of the past. In future the place will be known as Rio Campo and unless the name of the popular resport which was created by Lewis C. Cnopius is maintained, the name of Camp Vacation  will disappear forever. To the efforts of Mr. Cnopius and the late Mrs. Cnopius Camp Vacation  owes its great popularity as a resort and its wide reputation over the state.

With the changes that come and go. the railroad company has determined to call the station at the place Rio Campo, and with the completion of the bridge near that place there will be no other stops on this side of the river for the trains will continue their journey across the bridge and on down to Monte Rio.

With the coming summer season the loop completed by this bridge will make the redwoods section even more popular than it has been heretofore. Annually thousands of visitors spend their vacations in this delightful section.

The rails are laid on the Monte Rio side of the river, and everything is in readiness to connect the same when the officials give orders for the same.